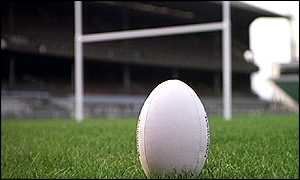 CARRICK Rugby Club III booked their place in the Forster Cup final with a narrow 8-5 win over their Armagh counterparts at a freezing cold Tom Simms Memorial Park.

It was a display of great discipline, defensive organisation and bravery which saw them edge past their opponents to become the first Carrick senior side to make a Ravenhill final in some years.

The starting 15 and the subs did themselves and the club proud and were cheered on by a large band of supporters.

And it was skipper James Porter who led by example with a number of thundering hits on his opposite man.

Carrick got off to the best possible start when winger Brian Alexander sliced through the Armagh defence to land a try in the opening minutes. The score was unconverted.

Armagh countered and much of the first 40 minutes was spent camped in the Carrick half. The weather and pitch conditions dictated that the game was a tight, close, physical affair with both packs engaged in a highly-charged encounter.

The Armagh team gained a number of penalties in this period but their kicker missed every attempt – one hitting the post and bouncing into the arms of an alert Carrick flanker.

Early in the second half Armagh, after a series of driving mauls, were awarded a try despite the close attention of a number of Carrick players trying to keep the ball from being touched down.

The game entered a key phase, and Carrick, having conceded a score in the atrocious conditions, could easily have succumbed, but right from the restart they regained possession.

After a series of plays they were awarded a penalty almost directly in front of the posts, but some 35 metres out. The strong easterly wind blowing across the pitch meant any kick for goal was a lottery, but Kris James held his nerve and coolly slotted between the posts.

The tension around the pitch was unbearable but in the final 15 minutes the Carrick half-backs played superb cup rugby, constantly pinning Armagh back into their own 22.

Carrick made a number of changes and special mention must be made of Craig Brazier who came on and won turnover after turnover.

Armagh attacked ferociously for the final five minutes, but Carrick’s defence again held firm. The referee blew his whistle and there were scenes of joy from Carrick supporters and players alike.