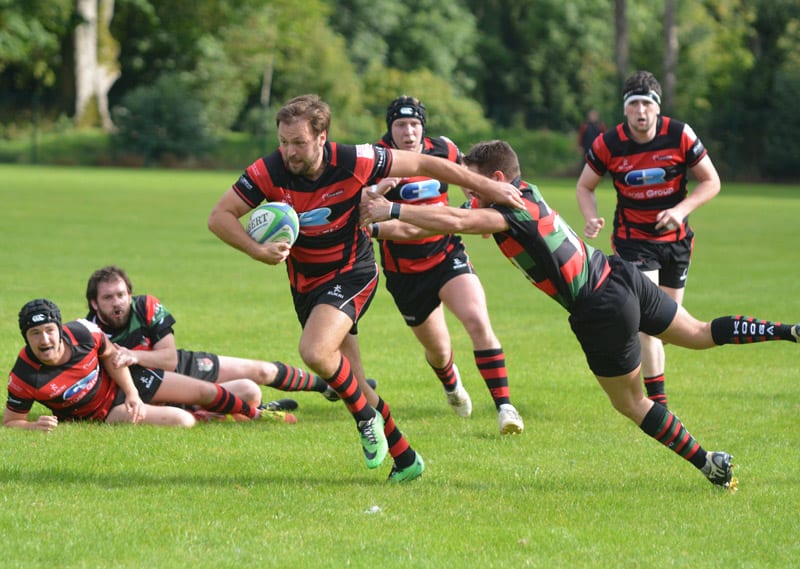 City of Armagh 15 Highfield 29
Armagh played their third game of the season in the Ulster Bank All-Ireland League on Saturday when they entertained Cork side, Highfield, at the Palace Grounds.

Highfield were one of only four sides to beat Armagh last season in the All-Ireland League.

With this game still fresh in their minds coupled with the narrow one point defeat to Greystones last Saturday Armagh were keen to put the records straight this week especially with the home advantage.

The game kicked-off in near perfect conditions and within five minutes play both sides had kicked penalties with Armagh’s Johnny Pollock & Highfield’s Paddy O’Toole opening the scoring.

Straight from the re-start Armagh’s left winger, Josh Morton, ran in a beautiful try as he broke three defensive tackles to score left of the posts.

On this occasion, Johnny Pollock’s conversion went just wide of the posts. Highfield’s kicker, however landed a further two penalties to bring the score up to 8-9.

It was the turn of the Highfield’s winger, James Daly, to score in the home corner.

The conversion brought the score up to 8-16 in Highfield’s favour.

Armagh returned the favour as a combined effort from backs, John Faloon & Matthew Hooks to touch-down close to the posts.

This was converted to bring the half time score to 15-16. The second half saw Highfield score a further try when substitute Mark Murphy touched down.

This was converted and a further two penalties saw the game end with 15-29 points on the board. Armagh showed some truely inspirational phases of play but appear to have difficulty being consistent.

The true potential of this young side has yet to surface this season but, no doubt, with patience will surface as the season progresses.

Next Saturday sees Armagh return to City of Derry to play them in the Ulster Bank League. Having already suffered a defeat there earlier in the season the Armagh boys will be keen to rectify things!

Willie Anderson, famed for playing on the Irish team between 1984-1990 was the pre match guest at the lunch before the game with Highfield on Saturday.

Willie gained a strong reputation as he captained the Irish side and confronted the all blacks as they performed their Haka.