Armagh narrowly lose out to City of Derry 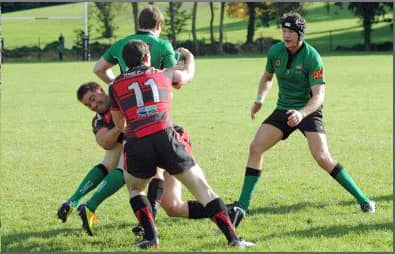 YET again Armagh were scheduled to play City of Derry in the Ulster Senior cup only on this occasion they had to make the long trek to Judges Road.

There was a degree of trepidation in the ranks of the Armagh supporters after last week’s performance with the added difficulty of facing a full strength home side.

The game kicked off in near perfect conditions but yet again Armagh failed to field the ball resulting in a scrum to the home side and Armagh immediately putting themselves under unnecessary pressure.

The first eight minutes belonged to the Derry side with Armagh defending stoically and putting in some big hits.

After some 10 minutes play Armagh full back Timmy McNeice slotted through a ball from the half way line towards the Derry ‘22’ which initially did not seem to pose any threat.

The Armagh full back followed up his kick was able to regain possession and subsequently went over the Derry line for Armagh to take an unlikely lead. The subsequent conversion was slotted over by the Armagh out half, Dillon Ferreira to leave the score 7-0 to the away team.

Once again Armagh put themselves under pressure from the kick off and this resulted in a penalty being awarded to the home side.

McCarter, the Derry out half failed with the subsequent kick leaving the score at 7 nil. Derry continued to put Armagh under pressure and were awarded a five metre scrum after some good defensive work by the Armagh scrum half, Harry Doyle.

From the resultant series of scrums Derry were eventually awarded a rather fortuitous penalty try which they went on to convert bring the scores even.

On 20 minutes Armagh were awarded a penalty after Derry were adjudged to be off side and this opportunity was once again translated into points by the Armagh out half.

Derry continued to edge the remainder of the first half although to their credit Armagh defended well and were aggressive at the break down. On 40 minutes the whistle blew for half time with Armagh just ahead on the score board.

The second half was only four minutes old when the home side went in for a try scored by their outside centre. The subsequent conversion was missed but for the first time Derry took the lead at 12-10.

Armagh continued to defend, thwarting Derry on several occasions from crossing the away side’s line. On 20 minutes Armagh winger, Josh Morton intercepted a pass on half way and sprinted the length of the pitch to score under the Derry posts. The subsequent kicked was converted to put Armagh back into the lead 17-10.

Derry continued to put Armagh under pressure and this resulted in a further penalty being converted closing the gap to 17-15 in favour of the away side.

As the game entered the closing minutes it looked as if Armagh were going to get an unlikely away win. However, on 39 minutes after a well worked move a try was scored by the Derry winger Logue. This was converted leaving Armagh losing by the narrowest of margins.

This was a very pleasing performance from an Armagh team that were up against a strong, physically imposing and determined opposition.

Armagh defended well and the pack competed and were aggressive at the break down. In particular the back row of McCall, Clarke and Atkinson put in a tremendous effort supported well by the rest of the tight five. The backs looked dangerous from the limited amount of possession they had.

If this team can go to Sligo next week with the same determined attitude and sense of collective they can certainly come away with the points.