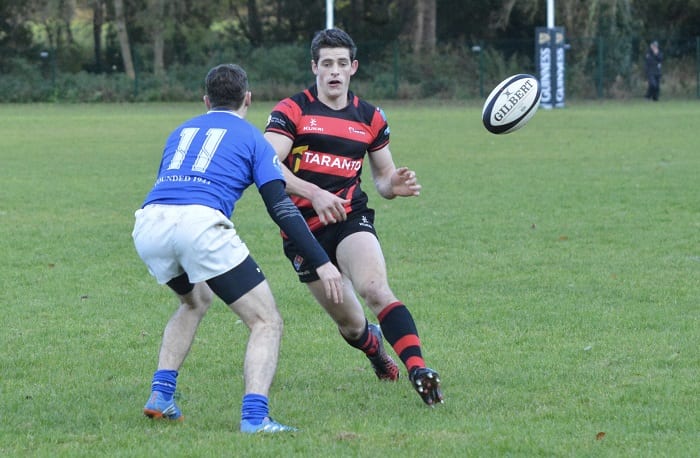 City of Armagh RFC maintained their unbeaten run in the Ulster Bank All Ireland League on Saturday with a crushing 71-10 victory over Limerick visitors, Thomond, at the Palace Grounds and scored eleven tries in the process.

In near perfect conditions, Armagh kicked off and it took just two minutes for the first try of the game. Chris Colvin and Neil Faloon carried the ball into the Thomond half and full-back Tim McNeice ran a great line to score in the corner. Eighteen year old Cormac Fox, making his senior debut, kicked a superb conversion to open the home team’s account at 7-0.

Thomond responded and in the sixth minute, Dermot Fitzgerald kicked a penalty in front of the posts for 7-3 after the home team were penalised for not rolling away. Armagh scored try number two on ten minutes when centre John Faloon crossed following a nice break from McNeice and supported well by Neil Faloon.
Armagh’s early dominance was evident when try number three arrived on 17 minutes.

Harry Doyle received the ball from an attacking scrum thirty metres from the Thomond line and the scrum-half fed winger Andrew Willis who beat his man to touch down in the corner. The conversion from Fox rebounded off the post but Armagh now led 17-3.

As the match moved Into the second quarter Thomond exerted some pressure in the Armagh 22 following a penalty kick to touch. Despite some pick and drives the visitors were unable to break through the Armagh defence and disaster struck when Willis intercepted a loose pass and raced 70 metres for Armagh’s bonus point try.

Fox kicked another fine conversion for Armagh to lead 24-3. With ten minutes of the first half remaining another Armagh attack resulted in try number five. Number eight Neil Faloon was having a storming game and his charge into the Thomond 22 allowed outhalf Fox to step inside and cross for a try to cap a dream debut. The tricky conversion was missed and the half time whistle went with Armagh leading by an impressive scoreline of 31-3.

The second half started with Armagh continuing to stretch the visitor’s defence. Neil Faloon again found space to break through from 30 metres out and he passed to Harry Doyle for the scrum half to touch down for another converted try.

The pressure on the visitors was relentless and a catch and drive in the Thomond 22 saw hooker Andrew Smyth break away to score a well-worked try. The conversion from Fox brought the scoreline up to 45-3 with half an hour still to play.

Next to score for Armagh was centre Chris Colvin who showed some great footwork and his converted try brought Armagh over the fifty mark to 52-3. His fellow centre, John Faloon then bagged his second of the day after breaking through the Thomond defensive line. Armagh’s next attack in the Thomond 22 saw them take a scrum against the head and Neil Faloon made it to the line for a well-deserved try of his own. Fox was keeping the scoreboard ticking over at 64-3. The young outhalf was keeping Armagh in control of the game and a great touchline kick brought play back to the Thomond 22. The visitors still showed a willingness to run the ball, particularly scrum half Aaron Rice and he made a fine break up the middle of the pitch. The visiting back row caught Armagh napping and Fintan Cross scored a consolation converted try for Thomond to make the score 64-10.

With 10 minutes remaining Cormac Fox left the field and his young replacement, Kyle Faloon meant three Faloon brothers were on the field to finish the match.
Armagh’s fine display of running rugby continued and Willis was looking for his hat-trick of tries. It was full back McNeice however, having started the avalanche of tries who scored the final one of the day and Kyle Faloon’s conversion resulted in the match coming to a close at
71-10.

Armagh were resounding winners with their best display of the season and Thomond had no answer to the dominance the home team enjoyed. The Armagh coaching team were delighted several young players took their opportunity well such as Philip Matthews in the front row, man of the match Cormac Fox and hooker David Swann who got a good run-out in the back row.

A super Saturday for the club saw the three adult teams in action score an incredible 206 points for and 26 against.

The First XV are now delighted to have a week off to prepare for a crunch AIL game away to second placed Greystones on November 26th.