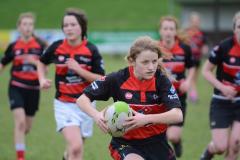 On Monday evening the Under 18 Armagh Ladies hosted near neighbuors, Monaghan, in what was a highly competitive and entertaining match. Despite the freezing conditions, the skills level of both teams was very impressive.

Armagh’s habitual slow start was banished for the evening, as they exploded into action. Phase after phase of Armagh possession in Monaghan’s 22 allowed scrumhalf, Carla Rafferty, to release her backs against a stretched defence.

Centre, Eimear McCarthy, raced over in the corner and around under the posts for Vicky Irwin to convert the try. The visitors were given little respite as first Emma Johnston and then Rachel Paynter broke the gain line and a slick offload to Leah McGoldrick put her in for a try in the corner. 12-0. Despite strong running from Lisa Henry, Rachel Paynter and a 40 mtr sprint from Sarah Lennon, the Monaghan defense held firm and prevented any further first half scores.

The second half began with Armagh, again, on the front foot. Leah McGoldrick ripped the ball from a maul and sent Lisa Henry away under the posts for a converted try. The Monaghan reaction was immediate and Saoirse Treanor broke several tackles in midfield, before racing away for an excellent, individual converted try. 19-7.

Back came Armagh and Lisa Henry turned over Monaghan ball and Laura Henderson could not be caught as she scored out wide. The game then swung firmly in Monaghan’s favour as they attacked relentlessly.

Kelly McCormill almost broke Armagh hearts with two outstanding tries from long distance. With both tries converted and the score at 24-21 in Armagh’s favour, it was now anyone’s game. Armagh, however, recovered their composure and held out for a win. This game was a great advert for Girls’ rugby and the sizeable crowd had plenty to talk about in the clubhouse afterwards.

Armagh Coach, Neil Rafferty, was pleased with the bright performance from his team. Despite a drop in fitness and concentration in the second half, he was particularly impressed with the Girls’ reaction on the pitch and their desire to win. Neil made special mention of Rachel Paynter, who was making her debut, and stated that her ball carrying and general play had been exceptional.

Armagh’s last league fixture is at home to Enniskillen, with all to play for, in the cup, come March.