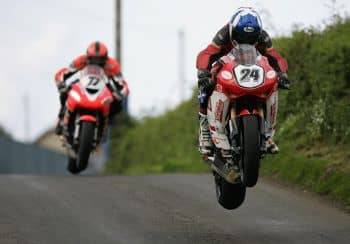 THE North Armagh Motorcycle and Car Club has welcomed plans for resurfacing work to local roads ahead of next year’s Tandragee 100 outing.

This year’s event saw a raft of complaints over loose chippings around various stretches of the County Armagh course.

Now Roads Minister Danny Kennedy has weighed in to say say resurfacing work is to take place along the Cooleyhill Road in a bid to alleviate the problems.

It follows months of lobbying by the race organisers and local councillors.

Robert Turner – an Ulster Unionist representative and a member or the Road Race’s organising body – said: “The new surface will be a very big advantage and will make the course one of the best around.

“I am delighted that we have had such a successful outcome to all our lobbying and hard work.”

The DUP’s Gareth Wilson added: “Last year’s event raised some issues with various surface problems and resurfacing this section, I know, will please riders and officials. It is something the officials and councillors in the area have lobbied Roads Service to improve.”

Roads Minister Danny Kennedy made his announcement after meeting with representatives of the North Armagh Motorcycle and Car Club.

“The work at Cooleyhill Road is representative of a number of schemes which have been carried out and others which are being planned in the Armagh area,” he commented.

Meanwhile, it has just been confirmed that next year’s Tandragee 100 should go ahead as planned.

The Tarmac Section of the North Armagh Club has met and revealed that it is applying to stage the event – one of the biggest in the racing calendar – over the usual May Day Bank Holiday weekend.