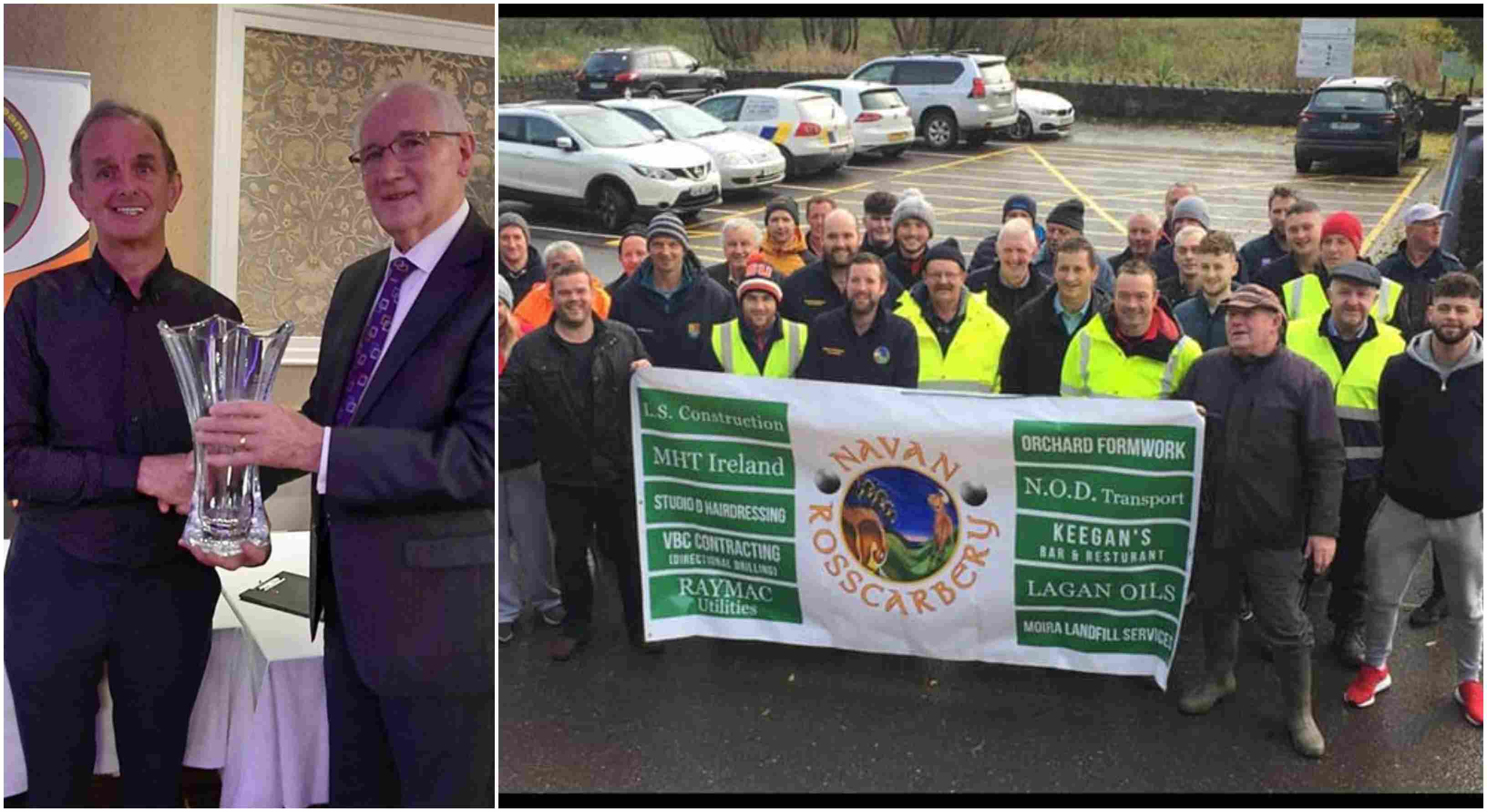 It was with great delight that Portmor stalwart Jim McLoughlin (main image) received this year’s Hall of Fame award.

Jim, who represents the Portmor Bowling club has worked relentlessly hard throughout the years and is more than worthy to receive this prestigious award.

Jim thanked The Bol Chumann Northern Branch and also Armagh Construction for thinking of himself in the first place.

He reflected about the Portmor Club and the strong committee behind the scenes, and without the hard work and dedication from them the Club would not be as strong as it is today.

When the All-Ireland Finals were held on the Blackwater Road for the two years consecutively, Jim and his team left no stone unturned – a total credit to all involved.

Jim Himself not only was honoured on the night but spoke very highly about his family, especially his wife Cora for the continued support she has showed throughout the years.

We at the Northern Branch and speaking on behalf of all clubs are so delighted that this year’s Hall of Fame went to someone who works so hard and has been appreciated to the highest standard.

Congratulations Jim and to the Portmor Club. Special thanks to Brian Toal who, without any hesitation, has yet again come up trumps delivering a fantastic infantry on Jim McLoughlin.

Navan Road Bowls Club, travelled in numbers (main image, right) To Rosscarbery Last Weekend and Enjoined with the Locals in a nine score Programme played out on the Cathermore road over two day’s. The Bonds of friendship are strong but rivalry on the road was intense as the Navan Men from the outset showed in content and several close quarter battles ensured. Former Dual under age All Ireland winner David Devlin was a big player for the Navan Road, Winning a double on Saturday with Partner Ruairi Hughes, And a singles Contest against Declan O Donavan on Sunday. Young Aaron Hughes Threw one of the great shots of the weekend on Saturday Lining a Majestic Final effort That saw him combine with his father Martin for a doubles win from Unlucky Ross Pairing Sean O’Neil & and Michael Brennan. Micheal O Sullivan, Who won the weekend’s opening score and Timmie O Sullivan winning two double contests did well for the Ross, But the Visitors Shaded the results overall, Five wins to four. A Return Ross Visit to Armagh is in the offering for early 2020. Jarlath Devlin Team Captain received the Annual Cup . Malachy Quigly (Armagh) who Bowled Jim Hayes Cork 32 Years ago in Armagh and won Marked the occasion by throwing an exhibition shot each on the Sunday Morning. David Devlin Received Bowler of the weekend award and Aaron Hughes received longest shot Award.

Next weeks Fixture’s Around the local Clubs

Newtown Road Bowls
NTH bowls results 10/11/19
Micheal Savage & Barry Conlon Vs Liam Davidson & John Garvey.
Winners Micheal & Barry
Next week 17/11:19, Newtown will welcome old friends from Port Mor for the annual traditional Mickey Rock Tournament.
Scores will throw of at 11.30 starting with Ciaran Savage & Liam Davidson vs Rhys Daly & Malachy Lennon. All other scores will be picked on the day.
The club would like to congratulate Jim McLoughlin on entering the Hall of Fame and we hope this is the only silverware he takes home this week.
Bol Chumann Na Mierleach
Results
Felons Overall Final sponsored by Viva Bar
After a lengthy delay due to the resurfaced road the Felons overall final took place grade 1 Winner Malachy Lappin took on Grade 2 winner Ryan Quigley +1 Shot, grade 3 winner Droghedas JP Clinton +2 shots and finally grade 4 winner Erin Connolly +3 shots.
It was Droghedas Jp Clinton the grade 3 winner who got of to a flying start with two big bowls, to leave him front with Quigley close behind while Lappin and Connolly got off to a poor start. 2 bad shots at The cap bowl by Clinton saw Quigley take advantage and go into the lead, Lappin and Connolly upped there games and started to claw there way back into the score. Quigley kept his lead with some well played speedy bowls with the following pack trying to keep in contention. At the half way point at drumsill a great shot by Lappin to score the line from bonds meant that there was only a shot in it between him and Quigley with Clinton a shot out on the front 2 and Connolly still in contention. Back in the road Lappin found top gear and at the cap bowl at Corvins it was all level between Lappin and Quigley and looking like a two horse race. It wasn’t until just past Mallons that Lappin took the lead for the first time in the score. After a poor shot by Quigley at McCanns Lane, Lappin opened up a sizeable lead going down to the last 2 shots. Quigley hit 2 big last bowls to put pressure on Lappin but Lappin has been in this position many times before and used his experience to see himself comfortably over the line and into the winner’s enclosure. Well done to all the throwers on an entertaining score.

Presentation & refreshments to be held in Viva bar After the scores.

Condolences
The chumman would like to offer its condolences to the Corrigan family on the sad death of Frank.
Mary Queen of the Gael Pray for him.

Message to all Clubs, Kids Youth will continue next Tuesday Night 7pm Sherry’s Field please could all children show up as their will be refreshments afterwards plus the chance to register with different clubs for 2020. On Behalf of the Northern Branch we would like to wish Joe Shortt and Oliver O Neil a speedy Recovery after both men were admitted to Hospital Get well soon