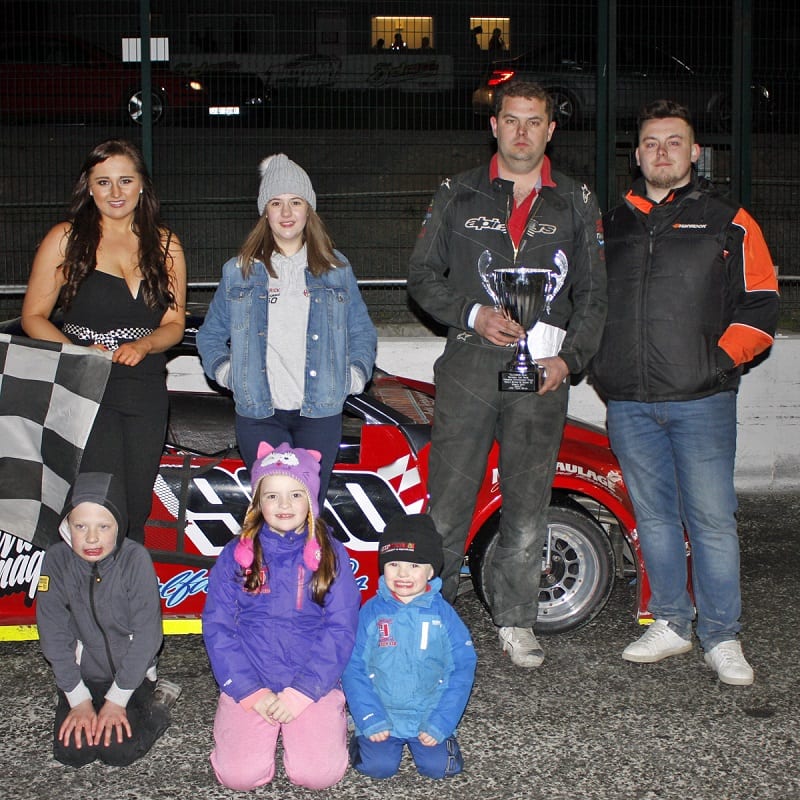 Portadown’s Mark Heatrick had an excellent evening at Tullyroan Oval on Saturday, as he took a heat and final double in the tenth round of the National Hot Rods World Series NI.

The racing was fast and furious across all five classes on show, with the other feature race wins at the LMC Trade Sales of Dungannon sponsored event falling to Victor McAfee (Stock Rods), Feargal McNally (2.0 Hot Rods), Mark Overend (Lightning Rods) and Adam McFall (Junior Productions).

A superb entry of twenty one cars came under starters orders for the tenth round of the Hankook Performance Tyres World Series NI for National Hot Rods. Ballymena’s Philip McCloy set the early pace from the front of the grid in heat one, before losing out to Ben McKee. Mark Heatrick meanwhile was taking advantage of his generous yellow grading for the evening and quickly hauled himself on terms with the leader, slipping past to the lead and the win during the closing stages. Mark’s nephew Adam Heatrick came through for a solid second ahead of McKee and returnee Nigel McCauley, whilst a sublime outside pass on Gary Wilson netted fifth for National and British Champion Adam Hylands. McKee hit the front from the off in heat two, and with McCauley and M Heatrick battling over second Ben was able to reel off the laps to take a well deserved victory. McCauley, M Heatrick and Hylands filled out the places.

M Heatrick qualified on pole position for the final, with McKee alongside and McCauley and A Heatrick claiming the second row. The Heatrick’s quickly established themselves out front, with Mark edging clear of Adam, the latter also attracting a warning from Race Control for the manner in which he demoted McCauley early on. Hylands was soon on the chase and began challenging A Heatrick’s second spot, but he lost out to a fast charging Derek Martin. Martin superbly made it through to second on the outside line, but M Heatrick was too far down the road and he duly took the chequered flag after a polished performance. Martin, Hylands and McKee filled the other premier positions after A Heatrick was dropped to fifth by the Stewards for his earlier misdemeanour.

The opening round of the MR Fabrications Challenge series was up for grabs for the Stock Rods, with the field bolstered by welcome Republic of Ireland visitor Paddy O’Dwyer. Ryan Murphy was the first to show in the opening heat, chased by Owen McGrath and Ballymena stalwart Victor McAfee. Victor calmly moved through to second, before executing a superb outside pass on the leader on the last lap to snatch a sensational victory over Murphy and McGrath. Tipperary based McGrath celebrated his first meeting as a DMC Race Promotions registered driver with a faultless win in heat two, with McAfee this time having to settle for second ahead of Murphy, as the star grade drivers again failed to make any impact on the top positions.

McAfee and McGrath shared the front row for the final, and Victor slotted ahead at the second time of asking after a messy initial getaway. McGrath kept McAfee honest right throughout an enthralling contest, but the Ballymena man held on to record a very popular win, for which he received a new Yokohama race tyre courtesy of the series sponsors, MR Fabrications. McGrath held on to second, ahead of World Champion Stevie McNiece in third.

A slightly depleted field of 2.0 Hot Rods took to the track, with some drivers still effecting repairs after their monumental crash at the previous meeting. Joining in the action notably was a return to racing for former World Champion Andy Best. Sean Dynes stamped his authority all over the opening heat, leading from start to finish to take the flag. Aaron Beattie was fighting a rearguard battle in second against Feargal McNally, only for Ryan McClure to pull off a great move to swoop around both to a creditable second ahead of McNally and European Champion Stephen Emerson. Beattie set the pace in heat two, once again losing out to McClure, who fought the long way around the outside once again. Ryan took a very impressive victory over McNally and Stuart Cochrane.

Beattie again led the way early in the final, but was soon under some pressure from McNally for the lead. The slightest slip allowed Feargal a run down Beattie’s inside at half distance, and he duly accepted a lead he wouldn’t lose all the way home. Cochrane took a morale boosting second ahead of McClure and Allen Cherry.

Adam McCann was the first to show at the start of the opening Lightning Rods heat, before he lost out to a fast moving Stephen Hollywood. As Hollywood stretched clear at the front to take the win, novice grader Mark Overend impressed in second ahead of Ally Neill and  hard charging World Champion Gary Beggs. McCann was again the early pacesetter in the second heat, before the race was brought under caution with Jordan Rochford embedded in the turn one wall. Former World Champ Scott Cochrane wasted little time in hitting the front on the restart, taking a well executed win over Neill and Irish Champion Richard Stewart.

Overend quickly demoted fellow white grader McCann in the final, hitting the front and pulling clear of Neill in second and a star graded train headed by Mark Corry. The pursuers inched ever closer to Overend as the race progressed, but Mark underlined his recent upturn in form by holding on all the way home for his first ever feature race victory. Neill, Corry and British Champion Rochford chased him over the line.

The young stars of the Junior Productions were competing in the opening round of their 2ke Engineering Young Guns Series, with Ben Bruce another to cement his recent good run with an excellent win in the first heat ahead of Sam McNeice and Graham Meek. Bruce repeated the dose in the second heat, taking another fine win to earn himself a rise to the blue grade for the next meeting. McNeice and star man Drew McKeown were next home.

Aggregate points from the heats determined the starting line up for the final, with Bruce and McNeice heading the grid in front of McKeown and Meek. Bruce took up the running with McKeown for very close company in second. Bruce then got brushed aside out onto the back straight, with McKeown racing clear to take the chequered flag. Drew unfortunately though was docked two places for the contact on Bruce, which elevated Adam McFall to victory lane and a nice Racemart voucher courtesy of the series sponsors 2ke Engineering to go with the silverware. Meek inherited second ahead of the demoted McKeown.

The next instalment of racing at Tullyroan Oval is this Saturday evening, May 6th (6.30pm), when the feature event is the 2017 Tullyroan Challenge Cup for Superstox. Also on the programme are the 2.0 Hot Rods, Stock Rods, Junior Productions & Reliant Robins.