All five formulas on show with some excellent racing 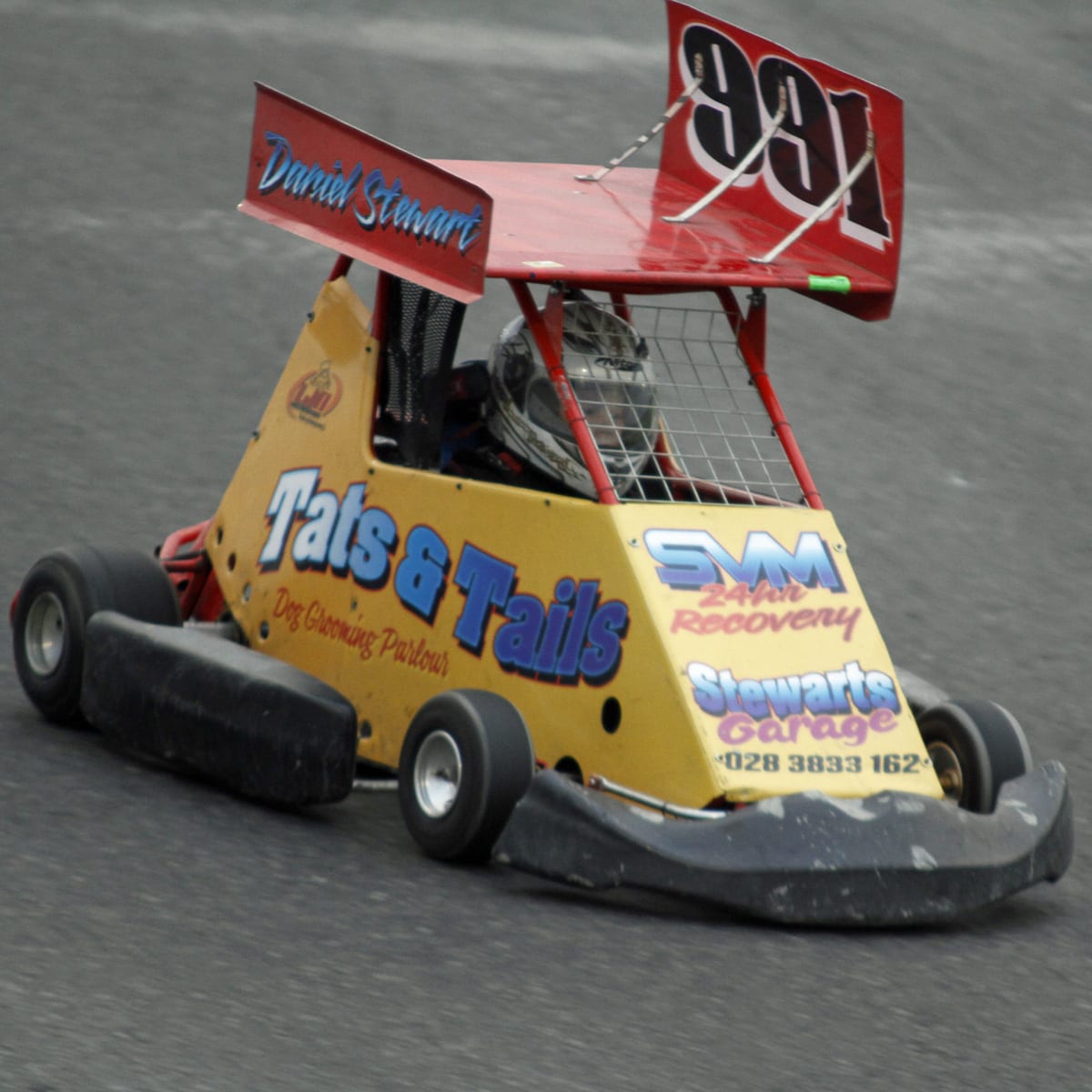 Less than a week after capturing the Leslie Dallas Memorial Trophy in the National Hot Rods, Portadown’s Glenn Bell claimed victory in the Lee Cherry Memorial Trophy for the 2.0 Hot Rods at Tullyroan Oval on Saturday night.

The second running of the magnificent Lee Cherry Memorial Trophy, held in memory of the much missed former racer, was the prize on offer for the 2.0 Hot Rods. Dungannon ace Adam Best got a great run on the outside line to wrestle the lead from pole sitter Feargal McNally in the opening heat, Adam going on to claim victory as McNally just held off a spirited challenge from Stephen Emerson for second.

The reversed grid second heat saw former World Champion Adam Hylands take up the running on his return to the class, before a caution period when Emerson deposited fluid all over the Tullyroan end. Hylands then made an uncharacteristic slip on the tricky track at the resumption, allowing defending title holder Allen Cherry to nip past for the win over Glenn Bell and Best.

Best set off in the lead in the final, with Bell immediately trying every trick in his repertoire to get past. He drew alongside a number of times, before a caution period when McNally had a huge crash on the Annaghmore Bend.

Best led them away as an absolutely terrific scrap resumed, before Best hit electrical trouble and dropped off the pace. Bell inherited the lead and took a well earned victory over Emerson and Stuart Cochrane.

The all action 1300 Stock Cars were contesting the Grand Final of the Ryan Wright Signs Iron Man Series, with Gracehill’s Peter Greer racing clear of the bumper action behind him to take the opener over Jon McQuillan, the latter having survived a last bend attack.

Greer repeated the dose in heat two, relieving a returning Tommy McCrory Senior of the lead to again lead McQuillan home. The closed grid final based on points scored across the series saw McQuillan hit the front early on as polesitter Michael Logan got punted aside. Irish Champion Ivan Elliott was slowly reeling in the leader, and all the while Calvin Blake and Greer were closing fast too.

A grandstand finish looked odds on, with Elliott diving in with the bumper into the final bend. He only succeeded in taking both himself and McQuillan out of the race, opening the way for Blake to race through for the biggest win of his career.

As Calvin took the well deserved honours, Greer and Willie Stewart followed him over the line with all three receiving tyres and trophies courtesy of the series and meeting sponsors.

One of the biggest fields of the season graced the Tullyroan circuit for the Thunder Rods Tullyroan Challenge Cup, the usually Aghadowey-based class enjoying their first outing of the year at DMC Race Promotions  Co Tyrone venue. Heat One saw Ballymena’s Daniel Rodgers take an impressive win, even surviving a mid race caution for debris to lead home Londonderry’s Johnny Pollock and Cullybackey’s Davy Wilson.

Irish Champion Samuel Montgomery from Limavady was the star of heat two, racing clear to take the chequered flag over Ryan Campbell and Wilson.

Wilson’s consistency saw him on pole position for the Tullyroan Challenge Cup final, with Montgomery alongside on the front row. After some frantic  opening laps, Wilson held sway at the front over fellow Cullybackey man Gareth Robinson and Graham Young.

Montgomery got the better of Young to go third, but the destination of the title was to be fought out between Wilson and Robinson. Gareth tried every trick in the book to unseat the leader, but Wilson was equal to his every move and took the honours after a great night’s racing. Robinson and Montgomery filled the podium.

Arguably the stars of what was a great meeting were the Stock Rods, with Stuart Agnew leading the way early on in all three of their races. The former ProStocks World Cup Champion is adapting to his new surroundings very quickly indeed, holding a resolute inside line and inviting the rest to find a way past.

The opening heat quickly turned into a huge scrap for the lead, with Ballymena stalwart Victor McAfee producing a great run right around the difficult outside line to grab a superb win over Shane McMillan and former World Champ Stevie McNiece.

Heat two saw Ben McCully sparkle as he was the man to lift the honours after another great race, leading home Jonny Cardwell and McNiece.

If the two heats were great, the final was nothing short of amazing, with Agnew again the man out front early on. By half distance the pack were on him, and it was Cardwell who spent lap after lap on the outside before slipping ahead to the lead. If the fans thought that was it over they were badly mistaken, as Shane McMillan came on a charge right around the outside to go second and quickly challenge Cardwell for the lead.

Despite Shane getting alongside, it was Cardwell who took the win by a fraction, with World Champion Marc Morrell also getting a great outside line burst to grab third over Derek McMillan.

The young stars in the Ninja Karts completed the programme, with Lauren Berry driving really well to lead the opening heat until almost half distance.

She unfortunately then had a spin on the back straight, opening the way for Max Hobson to take a great win over Daniel Stewart and Stewart Hanna. Berry again impressed in heat two, before once again Hobson rushed by to take up the running. He had no answer to the flying Stewart though, the Portadown lad sweeping past to take the win in some style over Hobson and Corey Stirling.

In the final Berry led for the opening six laps, before once again being challenged by Hobson. As they tussled for the lead, Stewart was catching fast from the rear of the grid, Daniel slipping past both frontrunners in one fell swoop to race home to the Greers Volvo sponsored trophy. Stirling came through for second at the flag ahead of Hobson and Hanna.

The next instalment of racing at Tullyroan Oval is on Sunday, September 24, featuring the latest round of the Hankook Performance Tyres World Series for National Hot Rods, the Nutshaker title for the National Bangers as well as 2.0 Hot Rods, Junior Productions and Ninja Karts.