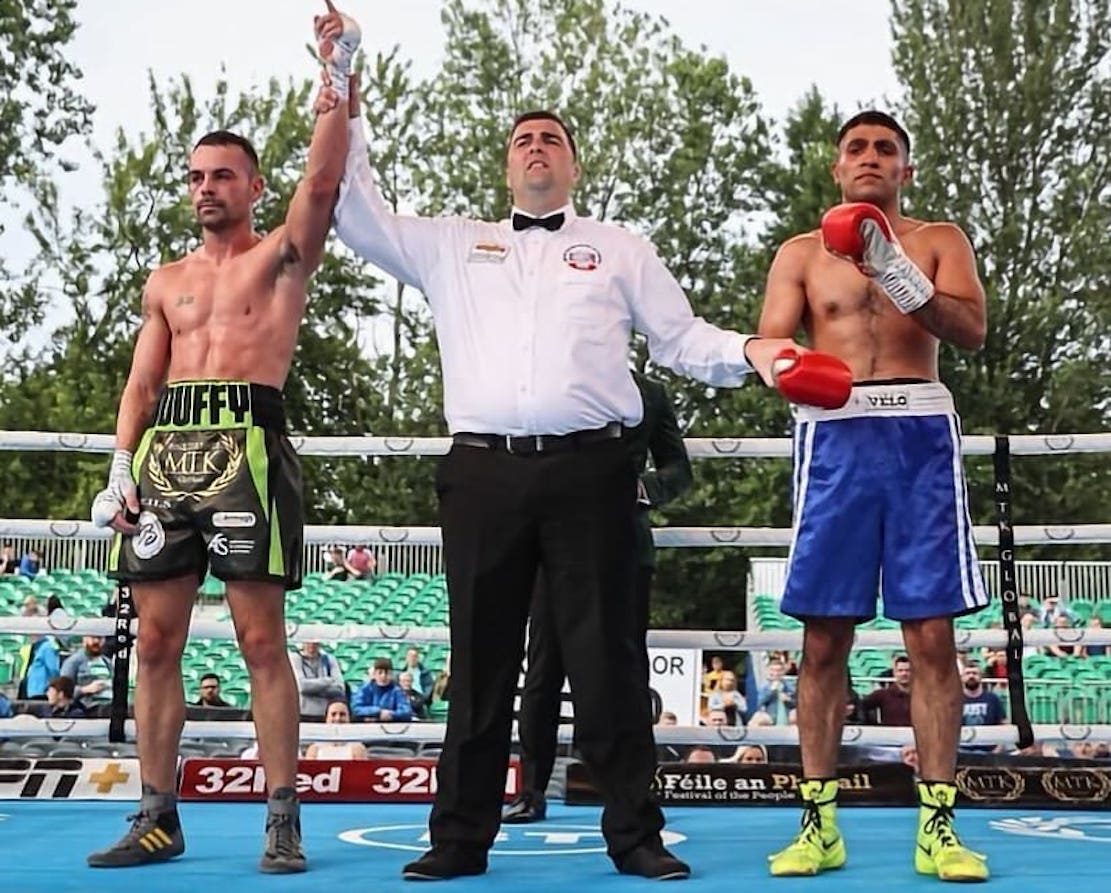 The 28-year-old defeated Englishman Naheem Chaudhry on points at the Feile An Phobail event on the undercard for Michael Conlon’s much-anticipated ‘homecoming’ as headline act.

This was a much different fight than Sean’s first which saw him dispose of Antonio Horvatic with just 47 seconds of the second round gone.

Speaking to Armagh I, Duffy said everything went to plan on the night.

“Anybody I have been speaking to was very impressed with the performance; with the variety of body and head combinations and my skill,” enthused the former Keady ABC amateur.

Duffy said that the unusual venue provided an almost concert-like atmosphere, which tops anything he has experienced in his fledgling career.

“It was a brilliant experience, fair play to MTK promotions, they have gone and put on an amazing event.

There had been fears that event could be a flop but Sean said:” Having the home crowd there, the atmosphere, everybody was optimistic at the start thinking it was either going to be really, really good or really bad.

“As the day went on, I was mixing in with the fans, with the people that came out to support me; it turned into a concert-like atmosphere where everyone was dancing between rounds.

“It completely brought the whole of Belfast together,” he said.

“The Feile is known as a music and arts festival but I think they made a good choice in bringing boxing into the Feile.

“There is a lot of talent in Ireland and why not put on a big event whenever we have that.”

The future looks bright for Duffy, but admittedly it’s one step at a time.

“In my mind, it’s just about getting fights and getting noticed,” he said.

“You’re not going to last on the pro game unless you pack a punch. You are basically a prized pig and people are coming to watch you put on a show and have the danger in your hands to stop that show.”

But the Armagh pugilist is sure his time will come soon: “It’s just about building up the record and I do believe I will be thrown in at the deep end, into the big shows and the big nights.

“I have been working with Harry Hawkins through the amateurs and he has had two professional champions in Brian McGee and Bernard Dunne.

“Harry knows the game inside out and he keeps me right, telling me your time will come you have to be patient.”

Duffy will be next out in the Autumn where he’ll be aiming for three from three.