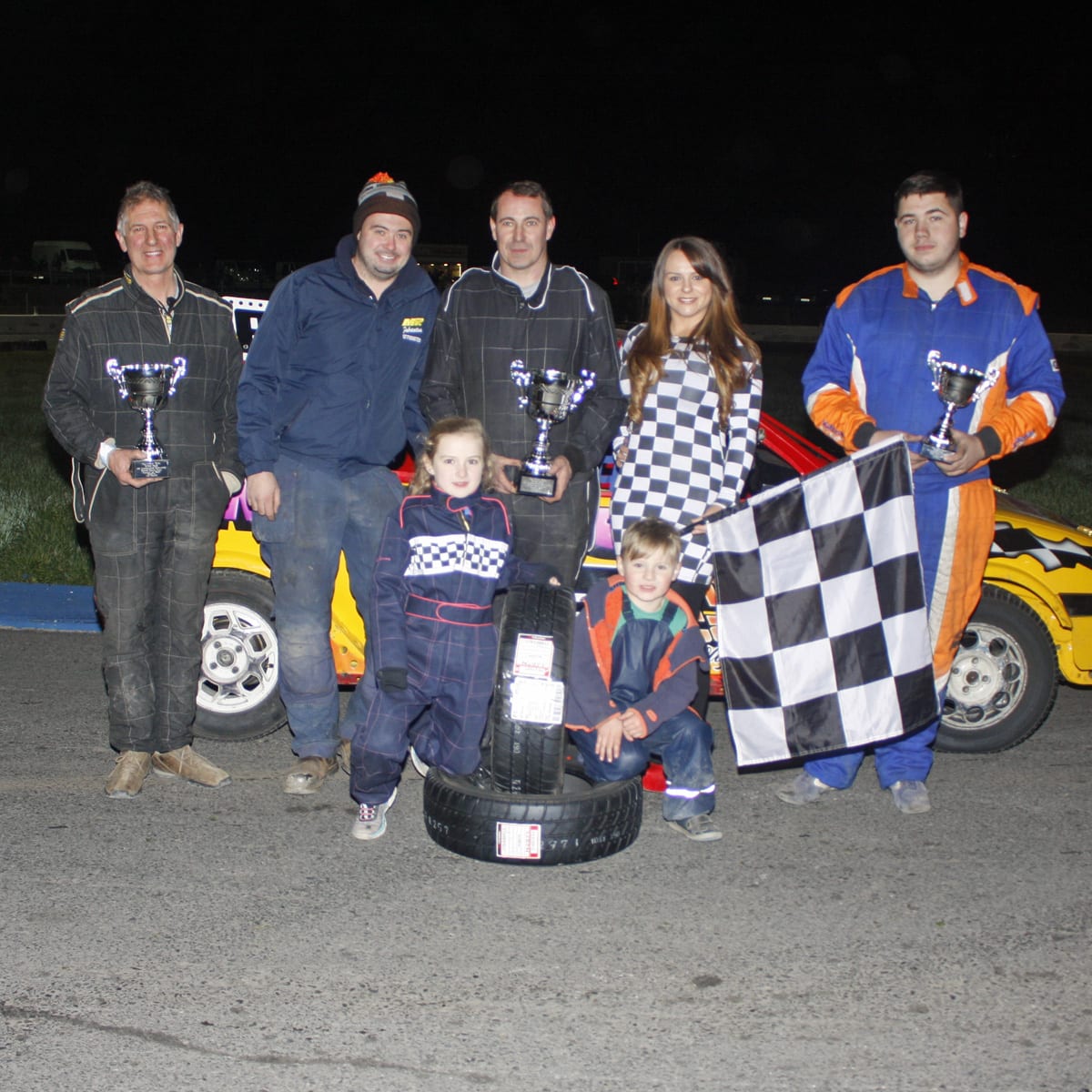 An excellent field of almost twenty Lightning Rods took to the track for the coveted Irish Championship title, lined up in points scoring order from throughout the season. A hectic start saw a huge turn one incident, which caused a stoppage and eliminated a number of runners from the restart.

At the second time of asking front row starters Jordan Rochford and Scott Cochrane battled hard, with Cochrane getting his nose in front before oil on the raceway made the going very slippery indeed. Rochford went to retake the lead only for he and Cochrane to tangle, which opened the door for Nigel Jackson to nip past on the wide outside in an opportune move.

Nigel had started fourteenth on the grid, and was now sensationally out front! He stretched clear as the laps progressed, with Rochford managing to recover to second on the road. As Jackson took the title for the fourth time since DMC Race Promotions were founded in 2003, Rochford was docked for early contact on Ricky Shaw.

That elevated World Champion Aaron Stewart to second ahead of Stephen Hollywood in third. Unfortunately Hollywood later failed the post race technical checks and was subsequently removed from the result.

The reverse grid Irish Revenge race saw Aaron Brunton set the pace out front, before Richard Stewart found a way past to take the flag. The manner of his driving before and during his pass on Brunton caught the eye of Race Control though, and he was penalised two places in the final analysis. That handed victory to Aaron Stewart ahead of Vince Litter.

The Junior Productions also lined up in points scoring order from throughout the season for their Irish Championship, led away by Drew McKeown ahead of Graham Meek and Sam McNeice. Meek made a sterling challenge for the lead in the opening laps, but McKeown smoothly withstood the pressure to edge clear.

Meek came back in the closing stages, but McKeown had all under control and came home for a deserved second Irish Championship victory after an excellent drive. Meek could be well pleased in second, ahead of another great drive from McNeice to take third.

The Irish Revenge race saw a clear win for Gareth Halliday, the Vauxhall Nova driver cruising home ahead of Adam McFall and Meek.

The Stock Rods were racing in the Grand Final of the popular MR Fabrications Challenge Series, with a debut for Daniel Rodgers and visits from Tipperary racers Paddy O’Dwyer and Philip Heery amongst the entry.

Heat One saw Stuart Agnew setting the pace before Owen McGrath bundled his way ahead. McGrath withstood some heavy pressure from former World Champion Stevie McNiece all the way to the flag, but McNiece took the win when Owen was demoted for the earlier contact on Agnew.

McGrath put the record straight with the win in heat two, again demoting Agnew from the top spot and this time withstanding a late charge from Jonny Cardwell.

Points from across the series lined up the grid for the Grand Final of the MR Fabrications Challenge Series, with Victor McAfee on pole position ahead of Ed Davis. McAfee got the drop at the green flag to lead them away, with McNiece quickly steeping forward to offer a substantial challenge for the lead.

Lap after lap McAfee held him off, until McNiece just and no more got himself under the Ballymena stalwart heading into the Tullyroan bend. McNiece romped home to take the win ahead of McAfee and World Champion Marc Morrell, with all three receiving new Yokohama race tyres courtesy of series sponsor Michael Rodgers of MR Fabrications.

As always the small band of Classic Hot Rods produced some thrilling action in their Escorts and Anglias. Jeff Richardson took the flag in heat one by just holding off Gary O’Neill, but O’Neill inherited the win when Richardson failed a post race tyre check.

Welcome Scottish visitor Kenny Purdie was a popular winner of heat two, although he was right on the ragged edge to hold off local ace Thomas Dilly.

The final, the latest round of the DRS Steelbuildings NI Series, was one of the races of the night with O’Neill setting the pace but being chased down by Clive Richardson.

O’Neill looked like he had done enough to fend off his attacker, but Richardson got a tremendous slingshot into turn three on the final lap to edge the win on the line by a whisker. It was a sensational effort from Clive to land the silverware, whilst O’Neill had the consolation of a new race tyre from DRS as the night’s top points scorer.

The biggest 1300 Stock Cars grid of the season so far produced some superb action, with Antrim’s Bradley Woods coming through the rough and tumble action to take the opening heat win ahead of Nicky Lowry and Ivan Elliott.

Heat two saw a huge back straight rollover for NI Points Champion Jon McQuillan, and the resultant yellow caution period wiped out the lead Woods had already built up in this one. Lowry managed to bumper his way to the lead on the resumption to take a fine win over Elliott and Woods.

McQuillan worked wonders in the pits to return his Corsa for the final, which again saw Woods thrust clear early on to build a commanding lead.

Nothing was going to stop Bradley completing his double for the evening, and he duly raced home to the trophy ahead of Lowry and Joshua McMullan.