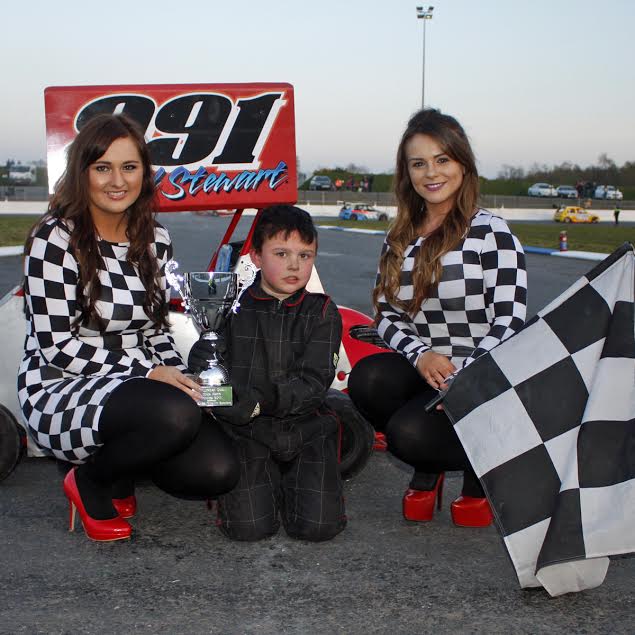 The 2017 race season at Tullyroan Oval started in superb style with a five formula spectacular on a perfect spring Saturday evening.

Two very welcome Scottish visitors, Gordon Alexander and Gerry Hendry, joined the locals to give a great seventeen car entry in the 2.0 Hot Rods, with Sean Dynes quick to hit the front in the opener before they were all brought up short by a melee on the Tullyroan end which curtailed the evening for a number of drivers with damage.

Dynes made no mistake at the restart, leading home Feargal McNally and Adam Best. Dean McFarland showed very well in the opening laps of heat two ahead of Brian Cherry, before a late swoop round the outside saw Joel Richardson take an impressive win over Allen Cherry and Best.

A duo of third places in the heats certainly signalled that Best was on top form, and he really had the bit between his teeth in the McElmeel Mobility Services final. Brian Cherry set the pace ahead of Aaron Beattie, with Best then making a superb pass on Beattie on the outside to head after the leader.

After tracking Cherry’s every move, Best took his opportunity when a gap appeared down the inside on the back straight. An experienced campaigner like Adam was never going to miss such an opportunity, and despite the cars briefly tangling, Best powered home to the win.

Stephen Emerson gave his new car a great debut in second ahead of Richardson, after Brian Cherry was docked two places for the contact with Best during the scrap for the lead.

The Lightning Rods as always never fail to impress, and a very healthy field contested three great races. Pick of them all was the opening heat, which saw British Champion Jordan Rochford produce a fantastic, last gasp charge on the outside line to grab the win by a matter of inches on the line from long time leader Stephen Hollywood. Hollywood made no mistake in the second encounter of the evening, powering home to a deserved win over World Champion Gary Beggs and Ally Neill.

Hollywood as expected stretched ahead in the final after demoting early leader Mark Overend. Catching the eye this time from the star studded red grade was Scott Cochrane, who scythed through the pack to go second after just ten laps.

A mid race caution when Richard Stewart and Chris McGirr tripped over each other allowed Cochrane to close the gap to the leader, although he now had an impressive Ricky Shaw for company too. Cochrane played a waiting game, and then the pressure paid off when Hollywood left the smallest of gaps and Scott was through to a lead he wouldn’t lose. Behind Cochrane, Shaw and Hollywood filled the major places.

Five novice graders were amongst a field of over twenty ProStocks, which unsurprisingly produced plenty of action and talking points! Returnee Jonny Teggart led much of the way in the opening heat before Del McLaughlin nudged past with three to go to take the chequered flag. McLaughlin’s car failed the post race technical checks unfortunately, handing victory to Portadown’s Davy Wright over Dylan Booth and Irish Champion Dan Shannon.

In only his first meeting, Jamie McCann showed great promise as he led the second heat for some distance. Wright was again the man on the move, moving onto McCann’s bumper with three to go.

A timely nudge wide saw Wright hit the front at the start of the final lap, only for McCann to hit back hard into the final bend. Wright however hung on for the win ahead of a spirited McCann and Mark McLaughlin.

After a somewhat untidy start to the final, Teggart again turned back the clock to lead things away out front. William McFaul quickly reeled him in from the blue grade before a late caution period for a stranded Adam White brought second man Wright into contention. The hat-trick was most definitely on, but McFaul produced a text book restart to edge away to a fine win over Wright and British Champion Steven Haugh.

The Superstox saw a race debut for Lee Johnston and a stunning new RCE machine for Stephen Stewart. Cyril Hawe set the pace in the opener before the pack closed in towards the end. It was a four way battle late on between Hawe, Keith McAreavey, Aaron McNeilly and Lee Davison.

Davison’s experience shone through as he raced by to the win over McNeilly and McAreavey. Hawe again led the way in heat two, but this time it was McNeilly who raced clear to the victory in some style. Davison just pipped Hawe to second by the slenderest of margins.

McNeilly hit the front in the feature race final, but soon had Davison chasing him down for the trophy. As the laps dwindled down Davison edged closer and closer, until he was in a position to go for a do or die into the last bend.

In superb stock car fashion he made the hit count, dumping the unfortunate McNeilly in the wall, leaving Lee to celebrate the victory and a rise to the red grade for the next meeting. Irish Champion Denver Grattan and McAreavey filled the podium.

Ninja Karts
Young Portadown star Daniel Stewart was the star turn in the Ninja Karts, taking a heat and final brace and just failing by the smallest of margins to make it a hat-trick of victories. Lacey Bevan was first to show in the opener, before losing out to Matthew Weir.

Stewart soon blasted through to the front and the win over Aaron Ward who drove a fine race from the star grade. Newcomer Ryan Berry and Bevan both had turns out front in heat two, before Weir raced clear. Stewart tried his best to get on terms, but it was Weir who held on superbly for his first ever victory by just 0.1 seconds on the line.

An early crash in the final eliminated Josh Henderson and Weir, leaving Brandon Litter holding the lead out front. He had no answer to a flying Stewart, who banged in yet another fastest lap of the race to take a commanding victory and seal his rise to the red grade for the next meeting.

Litter and Irish Champion Stewart Hanna chased him under the chequered flag.

Racing continues at Tullyroan Oval this Saturday night at 6.30pm, when the feature event will be the Irish Masters for the Stock Rods. Defending Champion Chris Lattka and Siobhan Martin will head a strong visiting Scottish challenge, with 2.0 Hot Rods, Superstox, ProStocks and Junior Productions also on the bill.