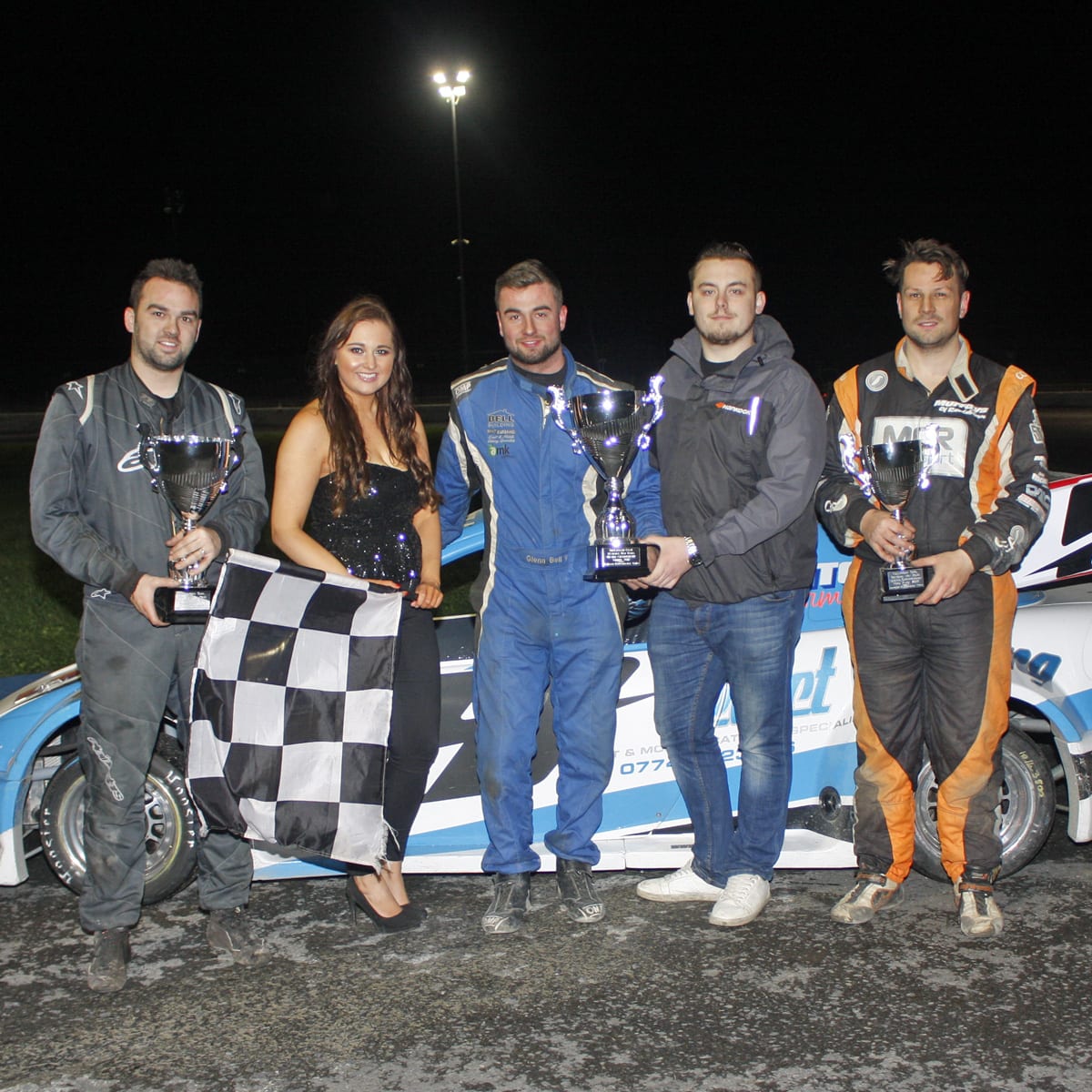 Glenn Bell beat Shane Murray away at the green flag to take up the running in the opening National Hot Rods qualifier for the first running of the Ulster Championship, the 2012 World Championship storming home to a great win over NI Champion Shane Murray and Gary Wilson.

The reversed grid heat two saw a win for Adam Hylands, with Derek Martin keeping him honest all the way home in second ahead of Jaimie McCurdy and British Champion John Christie.

Bell and Hylands shared the front row for the Hankook Ulster Championship final, with McCurdy and Christie on row two ahead of Murray and Martin. Bell led them away, and despite the best efforts of Hylands, Glenn was able to edge clear out front.

The pace under the lights was fantastic, as Bell stormed home to take the inaugural Ulster Championship victory over Hylands, Murray, Martin and Christie.

On points scored during the 2017 season, Jonny Cardwell and Victor McAfee occupied the front row for the 2017 Irish Championship. Cardwell settled into the lead with McAfee tracking his every move, until they entered the closing stages of the race. Cardwell ran wide into turn one, handing the lead to McAfee as some fluid on the raceway made the going somewhat tricky.

Cardwell came back to challenge, with contact into turn three sending McAfee wide. Cardwell assumed the lead once again  and led home McAfee, with Shane McMillan right there challenging too during the final laps. A lengthy Stewards Enquiry followed as the track videos were viewed, and Cardwell was unfortunately demoted two places handing a seventh Irish Championship victory to McAfee ahead of McMillan, with Cardwell in third.

A messy start to the reversed grid Irish Revenge race saw impressive recent newcomer Sam Wilson out front early on, before former World Champion Stevie McNiece found a way past on the inside line to record a clear win. Cardwell fought through from the rear to take a creditable second ahead of McMillan and McAfee.

The climax of the popular 2ke Engineering Challenge Series for Lightning Rods saw two heats before the Grand Final was lined up in aggregate points order from across the series.

Tim Hazlett was the star turn in both heats, running down long time leader Dermot Tynan in the opener to take the win over Aaron Brunton and Mark McCambridge, and then cruising home to another victory in the second over Vince Litter and Brunton.

The final saw star men Jordan Rochford and Scott Cochrane on the front row on aggregate points, with Rochford quickly settling into the lead.

As Cochrane’s challenge faded, Ricky Shaw came through to chase the leader, but Rochford held on for the win despite his car ailing with engine problems over the final laps. Jordan took the 2ke Engineering Challenge Series trophy and two new race tyres ahead of Shaw and Richard Stewart.

Thomas Morrison led the opening heat for the 2.0 Hot Rods, before being challenged by Aaron Beattie. Former European Champion Stephen Emerson quickly moved through to second before a late challenge for the lead saw Morrison spin out and Emerson subsequently disqualified. Adam Best came through the chaos to take the win over Stuart Cochrane and Ryan McClure.

Morrison put things to right with a fine win in heat two despite the pack closing near the end, Thomas leading home Sean Dynes and Beattie in this one.

Morrison again led them away in the final, with an early caution period wiping out his advantage. He led again on the restart but was challenged by Beattie, who forcefully made his way past to the front. Emerson was one to watch again in this one, slipping past Sean Dynes to go second and challenge Beattie for the top placing.

Beattie held on to take the flag, but was subsequently docked two places for the contact which removed Morrison from the lead. That handed victory to Emerson ahead of Dynes and the relegated Beattie.

The latest round of the Dilly Roofing Supplies NI Series saw Gerry Rothwell and Adrian Boyle from the Republic of Ireland join the local stars, with Gary O’Neill the winner of the opener over Thomas Dilly, after second on the road Clive Richardson was disqualified for contact on Dilly at the start of the race.

O’Neill again triumphed in the second heat in his Anglia over Dilly and Richardson, before it was Dilly who raced home to the feature race final victory over O’Neill and Rothwell. Thomas then kindly presented the new race tyre for winning the final, sponsored by his own company, to novice grader Boyle.

Racing continues at Tullyroan Oval on Saturday October 21st (6.30pm) when the feature events will be the 2.0 Hot Rods 2017 Irish Championship and the 1300 Stock Cars Ulster Championship.

The Grand Finals of both the ProStocks McElmeell Mobility Services Series and the Junior Productions 2ke Engineering Young Guns Series are also on the bill, alongside the Thunder Rods.