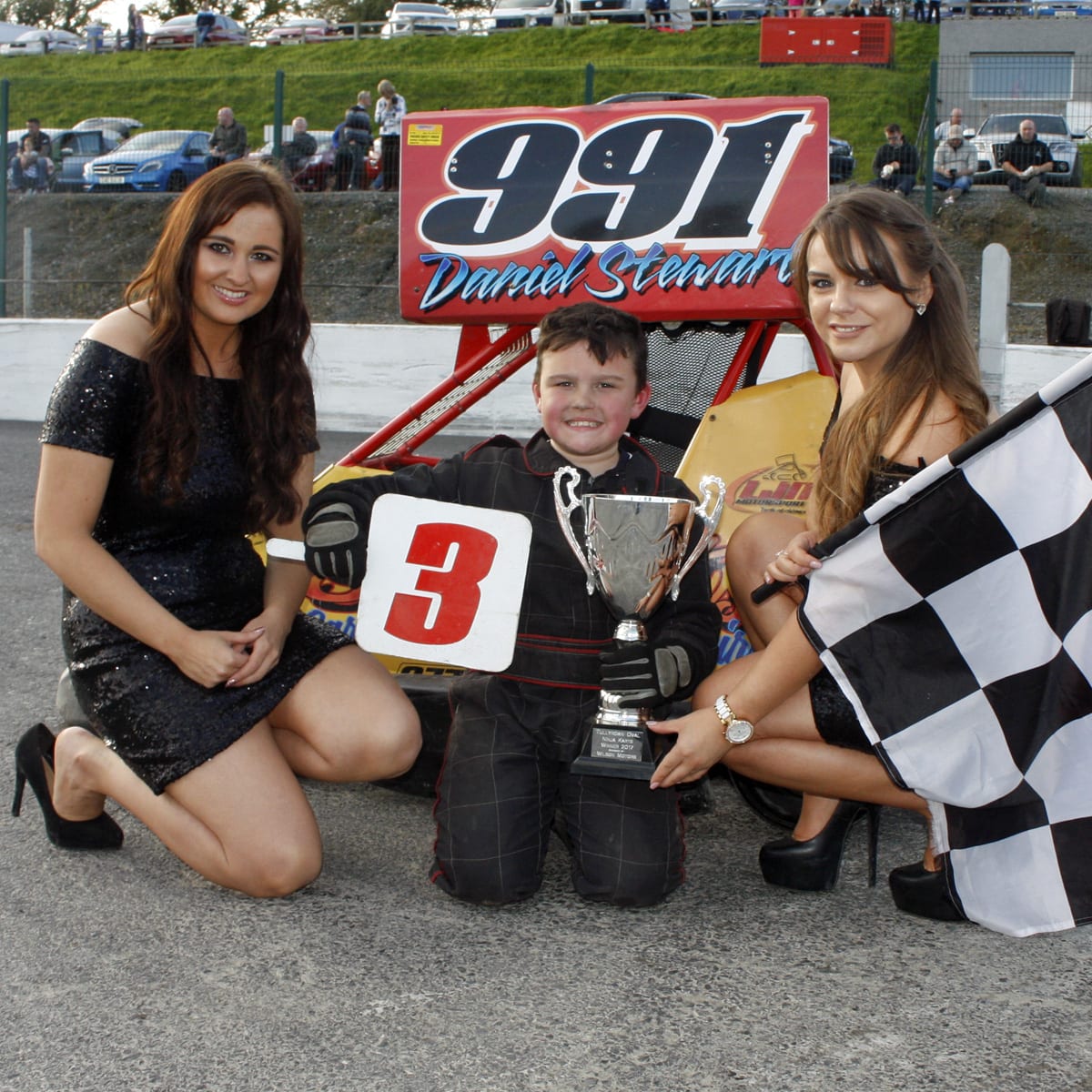 Daniel Stewart won all three races in the Ninja Karts at Tullyroan Oval on Sunday and is pictured here receiving the trophy for his win in the final.

A fine sunny Sunday afternoon greeted a large crowd at Tullyroan Oval at the weekend, and they were treated to some excellent race action on track.

Recent returnee Brendan McConnell was the first to show in the opening National Hot Rods heat, the sixth round of Hankook Performance Tyres World Series NI. In the main pack things were frantic to say the least, with Shane Murray and Mark Heatrick breaking free to chase down the leader.

Murray went for the lead on the outside line, racing home for the win ahead of Heatrick and Keith Martin. Stalwart Andrew Stewart took a morale boosting heat two victory, holding off a stiff late challenge from Martin to secure the win, with Heatrick and Murray next home.

The final paired Murray and Heatrick on the front row, and after a brief early tussle where Heatrick tried everything to get ahead, Murray settled into the premier spot.

Mark just couldn’t get back on terms despite his efforts, leaving Murray to cruise home to the win in the Ginetta over Heatrick, Martin, Adam Maxwell and Jaimie McCurdy.

The annual Nutshaker title was on the line for the Unlimited National Bangers, with some excellent action right from the off in the main race. Leonard Dunn was the first to show ahead of Kieran McIvor, before McIvor went out having hit the wall hard when his throttle jammed. Dunn got eliminated on turn two, with Mark Hughes and Jonny Murdock all involved.

Sensationally Murdock emerged from it all as the only car remaining, but his engine expired before he could make it to the line. With no finishers the result was declared on countback, with Dunn taking the win on most laps completed ahead of Seanie Bell and Liam Johnston.

The Allcomers race will be remembered for a huge head on between Marty McKiernan and Hughes, with the win falling to Steven Reynolds.

The Destruction Derby was for the coveted Stephen Bannon Memorial Trophy, and after some heavy early laps that eliminated Stevo McGrath, Reynolds, Rod Herron and Johnston, it was Rocky McKenna who emerged for a deserved win. Best Wreck of the day fell to McKiernan, with Heron taking Entertainer of the Day and Best Presented Car as he celebrated his 50th birthday.

The 2.0 Hot Rods were contesting the Grand Final of the Hoosier Racing Tyres Challenge Series, with the points scored in the day’s heats added to their series points so far to determine the final grid. There were also a trio of Republic of Ireland drivers making a welcome visit – Ian Riordan, Aidan Hallahan and Jason O’Brien. The first heat was a Sean Dynes benefit, the Dungannon racer edging clear to take the win over Aaron Beattie and Stephen Emerson.

Allen Cherry took the heat two win by some distance, but behind there was a huge battle for second. Beattie, Dynes, Adam Hylands and Emerson were going at it hammer and tongs, with Hylands grabbing second on the line with a fine outside drive.

Emerson and Stuart Cochrane shared the front row for the final, although they were all brought up short early on for a stoppage when O’Brien clattered the turn two wall. At the resumption Emerson pulled clear to take a resounding victory to make it a Hoosier Series clean sweep of both opening rounds and the Grand Final. Cochrane kept him honest all the way home with Dynes and Glenn Bell next home.

Daniel Stewart was the star turn in the Ninja Karts as he took victory in all three races for a perfect hat-trick. The ever improving Lauren Berry led them away in all three races, and was challenged in the opener by Lacey Bevan and Matthew Weir. Stewart quickly arrived on the scene and swooped past to win ahead of Corey Stirling and Stewart Hanna. Stewart again was on a roll in heat two, charging from back to front for another excellent win over Stirling and Bevan.

Berry and then Max Hobson had turns out front in the final, but Stewart had the hat-trick in his sights and duly took the win over Hobson, with Stirling in third in his last ever race due to reaching the upper age limit.

Some excellent racing from the Junior Productions rounded off the programme, with Callum Magill and Sam Percy disputing the lead before Matthew Nicholl found a way past to take the first win in his new car. It was slippery going in heat two with plenty of oil from the Bangers on the track. Gareth Halliday was the one who coped best with a great win over Magill and Nicholl.

Magill led them away in the final, but Halliday quickly challenged before storming off to another stylish win to complete his double for the day. Magill and Graham meek completed the podium places.

Racing continues at Tullyroan Oval on Saturday evening, with Irish Championships for Lightning Rods and Junior Productions the feature events.

The Grand Final of the MR Fabrications Challenge Series for Stock Rods is also on the bill, as well as Classic Hot Rods and 1300 Stock Cars.