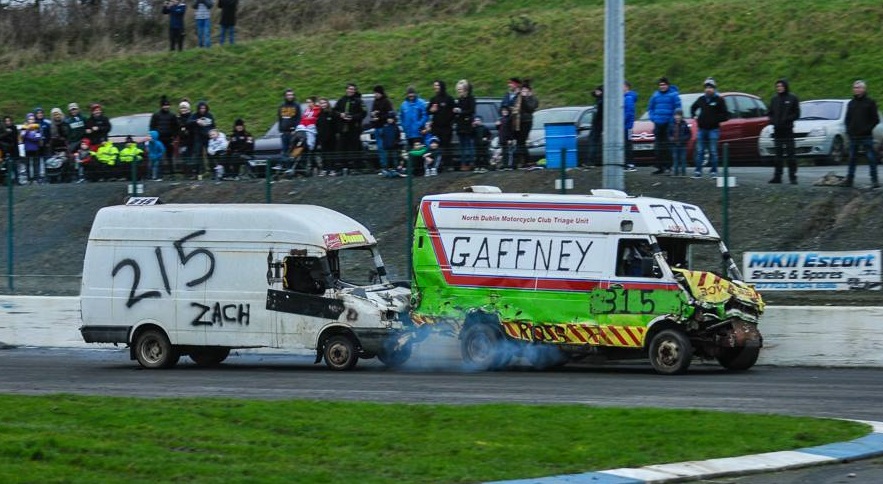 There is an excellent entry of Big Vans for the ‘Van-dalism 2019’ feature event, with twenty of all shapes and sizes set to take to the grid. Donemana’s Irish Banger Champion Leonard Dunn and former World Champion Steven Bolton from Ballymoney top the entry list, with Dublin ace Stevo McGrath, Lisburn’s Rodney Herron and Armagh’s Davy Patton all set to be in the midst of the action too.

Van racing always produces some excellent action as the vehicles are bashed and crashed in pursuit of victory. The afternoon will come to a thrilling climax with the Destruction Derby, where the last van moving wins!

The Rookie Bangers will play a great supporting role, and they too have a fine entry of over 25 cars. Reigning points champion Paul O’Connor, Josh Goligher, Peter McConnell, Sammy Fisher and Josh McKinstry will be certain contenders from the big field, with drama and action aplenty set to thrill the local fans.

The 2.0 Hot Rods have a rare winter outing at Tullyroan too, with Irish Champion Adam Best set to be the star attraction. Local favourite Allen Cherry will be another chasing vital World Championship qualifying points, alongside Antrim’s Conor Hughes, Ballyclare’s Gary Wilson and Portadown duo Stuart Cochrane and Drew McKeown. World Champion Nigel Jackson will top the Lightning Rods entry, whilst another big field of Junior Productions are set to do battle once again.

The first race of the festive programme, sponsored by Cirrus Plastics of Portadown, blasts off the Tullyroan grid at 2pm.