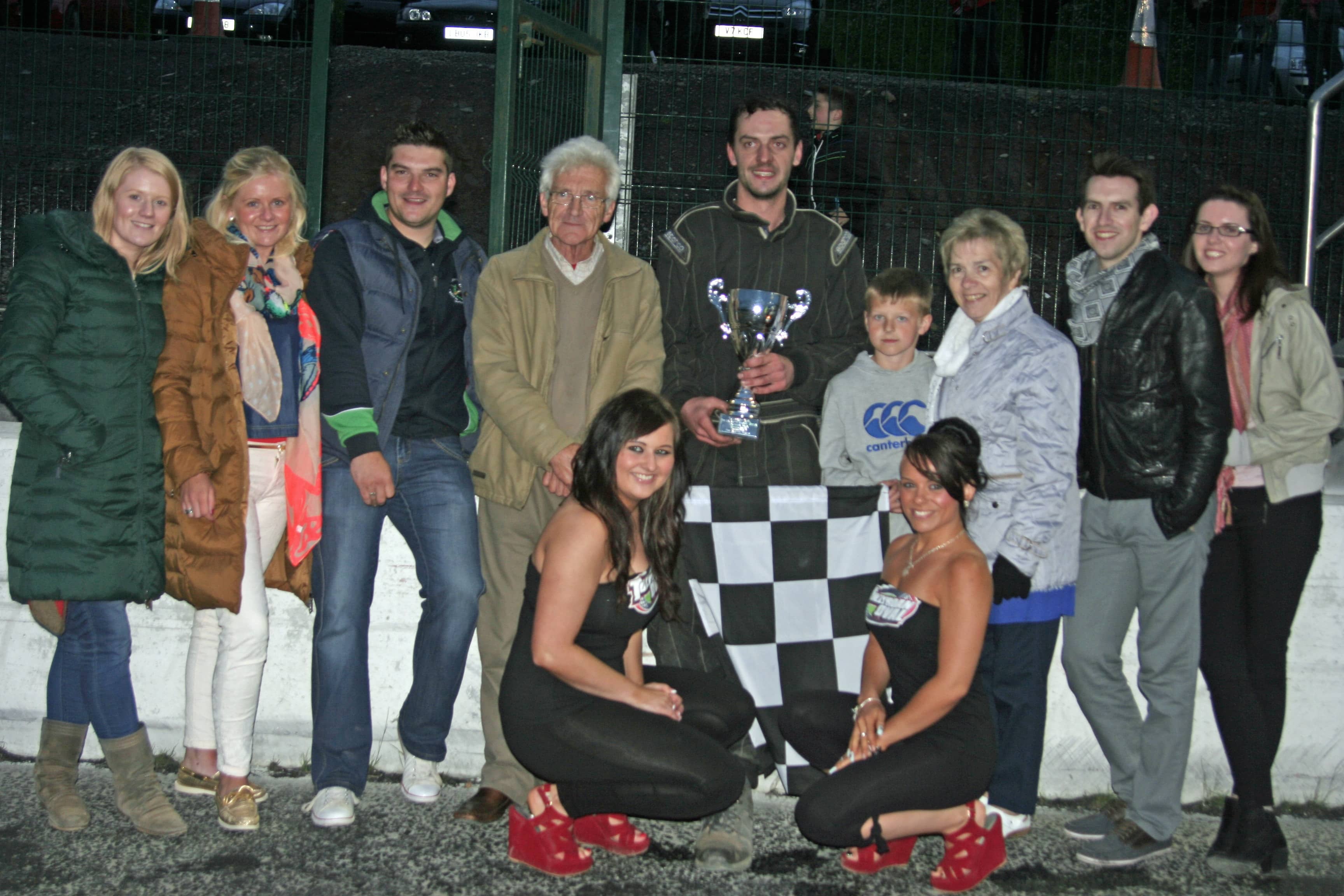 The first ever staging of The Les Beattie Memorial Trophy took place at Tullyroan Oval on Saturday night, and it wasTemplepatrick Lightning Rods ace Ben McKee who lifted the coveted award after being crowned Driver of the Day for his heat and final double. The event was staged in memory of Les Beattie, a great supporter of the local race scene, who was tragically taken from us late last year.

From an excellent showing of 19 cars on track, the Lightning Rods produced three excellent races during the evening. In the first heat recent form man Gordy McKee stormed through from the red grade to take top spot from long term leader Gerry Rogers to secure the opening win of the night. Mark Taylor and Dane Ferry chased him home in that one. In heat two it was the other McKee brother, Ben, who took the lead from impressive novice grader Mark Corry to land the win. Winston Weir and Brendan McConnell tried their upmost to get on terms with the leader but just couldn’t quite manage it.

In the final Corry again set the early pace before McKee scythed through from his blue grade start to take up the running. Weir and McConnell were again on a charge from the back but McKee had sufficient advantage to hold on for his second win of the night, and with it secure a return to the star grade for the next meeting. As the only driver to score two wins at the meeting, Ben was also the proud first recipient of The Les Beattie Memorial Trophy.

The ProStocks just keep returning in even bigger numbers each week, with a superb 38 taking to the track on Saturday evening at some stage or another. As expected the action came thick and fast, with incidents galore and yellow flag suspensions throughout the night.

The first heat saw one of the best races of the meeting with Dean Fleming taking up the running as we entered the final stages. A multi car battle for the lead continued as they took the last lap board. Local lad Jack Gilpin briefly took the lead before being brushed aside and in the midst of the chaos former World Cup Champion Tam Agnew slipped through to take the win ahead of Fleming and former British Champion Ryan Abernethy.

Heat two saw things go right down to the wire once again, as Wayne McKay was dislodged from the premier spot on the last lap allowing Chris Hamill to grab the spoils amongst all the drama. The opening laps of the final were immense, with plenty of bumperwork in evidence and cars ending up in all sorts of shapes. Once a couple of suspensions had settled things down, novice grader McKay put his Ford Focus to good use by leading from start to finish. The Dungannon man had to resist a huge last bend lunge from Ryan Fleming to take his first ever win, with many more to follow on this showing. Fleming held on for second ahead of Robert McIlroyat the end of another excellent showing for what must surely be the most exciting class on the local ovals at present.

Once again a big field of Ninja Karts turned up for battle, with 6-year-old Sam Percy the latest new recruit and he got a trophy to mark his first ever appearance. Callum Magill set the early pace in the opening heat on his best showing to date, before Matthew Nicholl stormed through from the blue grade to take the chequered flag with star man Adam McFallcoming through to second. In heat two there was a flag to flag win for Ballymena’s Adam Weir, who showed the others a clean pair of heels from the off for his first ever race win.

The final saw an early stoppage when Jake Woolsey collectedthe spun McFall Kart at the end of the back straight, the fastest part of the circuit. Despite considerable damage to Jake’s machine, he was fortunately relatively unhurt. At the full restart, McFall overcame the disadvantage of deranged steering on his kart to still storm through to a fantastic win. Stuart Emerson took runner up slot with long time leader Sophie Willis in third after another great showing from the youngsters.

Ballymoney driver Thomas Morrison has endured a more than difficult start to the 2013 season with his new Corsa ‘C’, but he put his troubles behind him to take victory in the final on Saturday evening. He led the field from start to finish, although he was under severe pressure nearing the end fromAhoghill’s Marc Morrell and Jonny Cardwell. Such was the pressure that Morrison took the flag with his front brakes glowing red hot! Morrell took second in the end, ahead of Cardwell and Raymond Harper.

Earlier a great drive by Morrell had netted him victory in the opening heat ahead of Harper and Derek McMillan, before Jonny McMillan drove an excellent race to take heat two fromMorrell and Cardwell.

It was Round 2 of the Murrays of Randalstown Young Guns Series for the Junior Productions, and they produced three different race winners on a very competitive night for the formula. Bradley McKinstry signalled his intentions with a controlled win in the opening heat over Ethan Dilly, before Edmund Davis produced his best performance in a number of meetings to take a convincing win in heat two.

McKinstry’s runner up slot in the second heat was enough to put him on pole for the final, which went on to produce an absolutely dramatic race from the young drivers. McKinstryjust couldn’t get the breakaway that everyone expected at the start, with Davis tracking his every move. Down the back straight and Davis went for the lead, with McKinstryslamming the door hard shut resulting in contact between the pair. McKinstry lost massive ground, whilst Jordan Robinson was able to nip past both to assume the lead. Davis came backinto the next bend, and robustly regained the lead which would become crucial later. Edmund led them home to the flag, but was docked two places for his misdemeanour which handed the win to Dan Campbell. Robinson took second with Davis unfortunately demoted to third.

Racing continues once again this coming weekend atTullyroan Oval, with the two-day Big Banger Weekender. On Saturday from 6pm we have the 2L National Bangers Irish Open Championship with support from Rookie Bangers, Stock Rods, Junior Productions and Reliant Robins, whilst On Sunday (2pm) the headline event of the Unlimited National Bangers Irish Open title will be supported by ProStocks, 2.0 Hot Rods, Ninja Karts and Superstox. The Bangers on both days will feature excellent fields bolstered by a number of star visitors from England, Scotland and the Republic of Ireland.