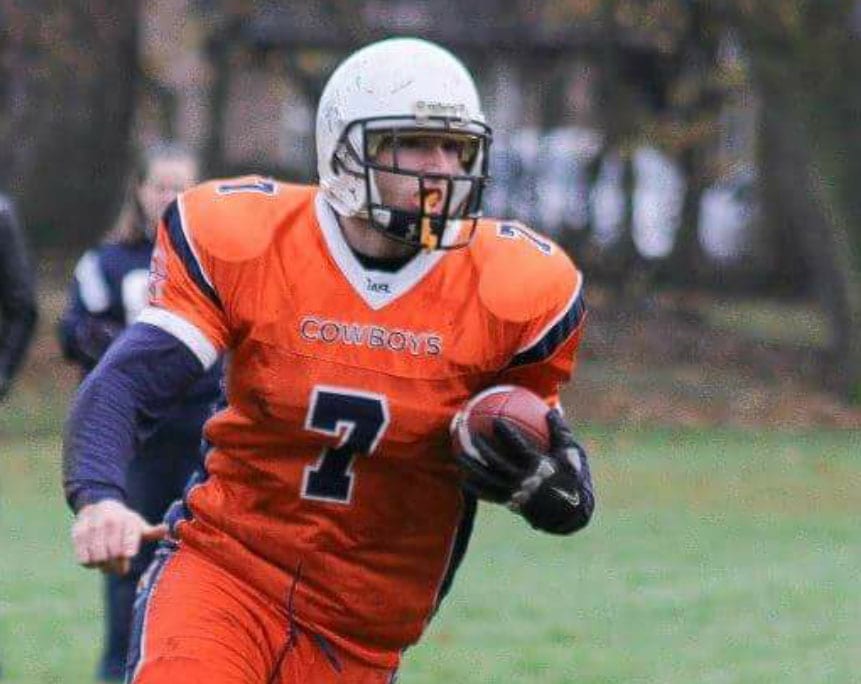 Craigavon Cowboys got their first win of the season as they ran over the visiting Rhinos from West Dublin.

With both teams looking for their first W the game started nervously with Cowboys looking good on offence but unable to convert into points and the ‘Boys Defence looking stern.

In fact it was the Craigavon Defence that opened the scoring when they pinned the Rhinos onto their own five yard line before opening up the visitors Offensive Line allowing Lee Mustoe to storm through and sack the Quarterback for a Safety.

The half time period ended with the Cowboys leading 2-0 but that was soon to change early in the 3rd QTR with QB P Loughran finding Tightend Conrad Smith with an exquisite pass through a small window into the End Zone, Luis Alberto slotting home the Point After Attempt.

This seen the Offense rolling and Alberto was soon running into the End Zone himself with a long pass by Loughran found him in acres of space and he ran in for a 70 yard touchdown, he then converted his own Touchdown.

With the home Defence stiffling any sort of comeback, this afforded Loughran’s offence the feild position to keep racking up the points with some great rushing yards seen Loughran break free and run in a TD for himself from 18 yards.

The Cowboys where not finished there and after a big 25 yard run ended 4 yards out for Andrew Herron, the Running Back took the ball from a Loughran swing pass and busted three tackles before thumping the ball home to round out the scoring for the day.

A dominant performance from the Cowboys to see them for 1-2 for the season, next up is an away trip to North Kildare Reapers this Sunday (3rd May).