Davison on top of the world at Tullyroan Oval 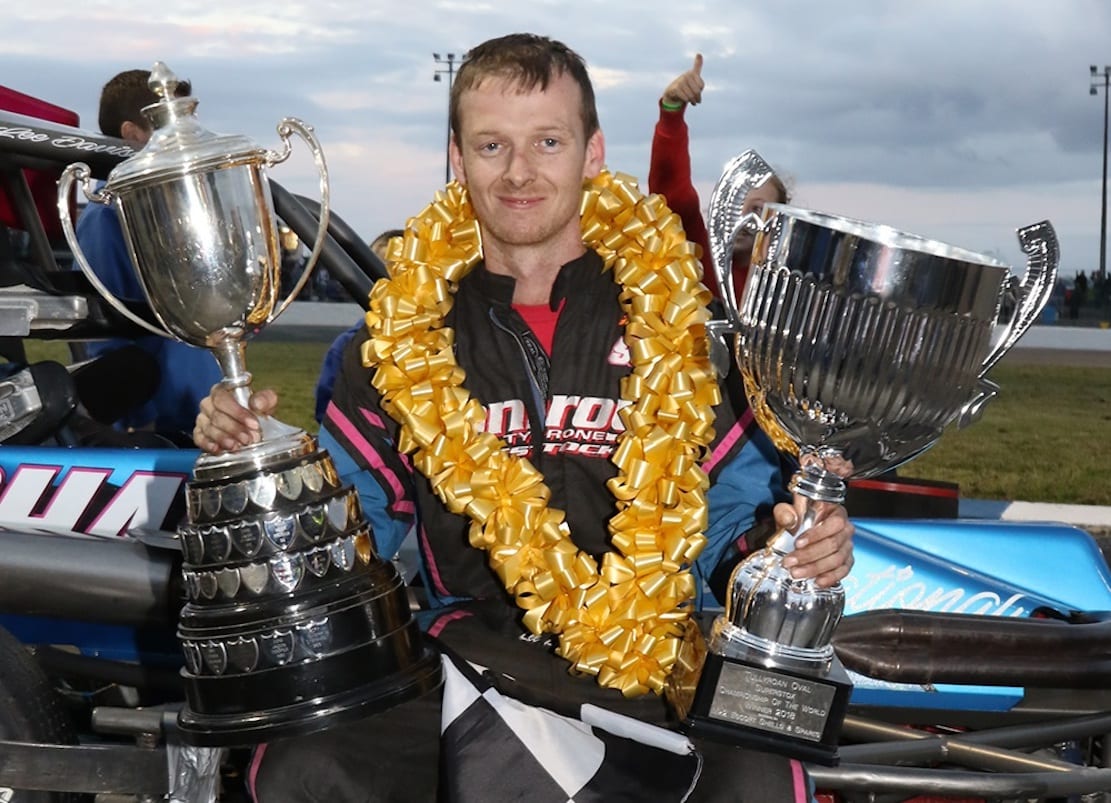 Portadown driver Lee Davison was on top of the world at Tullyroan Oval on Saturday night, when he was roared home by the huge crowd to win the prestigious Superstox Championship of the World!

After a tense championship race in front of a packed house, Lee held on to land one of oval racing’s oldest titles ahead of English duo Dan Roots and Mark Smith. The other major title of the weekend was contested on Sunday afternoon, when Portadown’s Adam Hylands took a sensational last gasp victory in the National Hot Rods British Championship. Adam nipped past long time leader Shane Bland on the final lap to take the win in an epic finish. Six formulas entertained across the Speedweekend, which was kindly sponsored by Mk2 Escort Shells & Spares, DRS Steelbuildings and Hoosier Racing Tyres. There was also a celebration of 50 years since the opening race meeting at Shamrock Park, with a great display of memorabilia and demonstrations by cars and drivers of the past.

The atmosphere within the Tullyroan bowl was at fever pitch as thirty three Superstox set off on the rolling laps ahead of the Superstox World Final, a race with a pedigree dating right back to 1961.

From pole position Lee Davison led them away, chased hard by Norfolk’s British Champion Jason Cooper. Cooper slipped ahead as the race twice went under caution, before he was unceremoniously dumped out of contention by a backmarking Jordan Aylward.

Davison surged back ahead, and was willed home by the huge local crowd who were sensing a home win! Lee completed the final laps to take the chequered flag and the World Championship title in some style, becoming Ulster’s first World winner in the formula since Ian McKnight way back in 1992. Lee celebrated with some fantastic pirouettes in front of a packed Annaghmore Bend, before being greeted by his friends and family amidst some highly emotional scenes. English duo Dan Roots and Mark Smith completed the podium, with Martyn Coles and Nick Roots next up.

Another home win came in the Allcomers heat as Aughnacloy’s Kyle Beattie drove a superb race to take the win over Martyn Coles, before the 50 th Anniversary Final went to Coles after he nudged past Beattie late on.

Sunday’s Superstox action was for the Irish Open Championship, which saw Nick Roots take a lively opening heat before Davison continued his great weekend with victory in heat two. A fantastic opening few laps to the Irish Open final saw Davison ahead of Scotland’s David Frame, before Frame lost out and ended up against the wall. He rejoined and baulked the leader, allowing Cooper to spin Davison out of the premier position. Multi champion Cooper reeled off the laps to add another title to his collection, with Davison recovering for second ahead of Scottish based European Champion Stuart Gilchrist.

The DRS Steelbuildings National Hot Rods British Championship saw an opening heat win for Adam Hylands over Jaimie McCurdy, before European Champion Shane Bland from the Midlands powered home to take the second heat over Glenn Bell in a race blighted by a huge crash for Derek Martin.

World and National Champion Billy Wood from Hampshire raced home to the third heat win over local ace Gary Woolsey. Hylands and Bland shared the front row for Sunday’s British Final, which was stopped early on for a
huge back straight crash which saw a number of cars airborne and badly damaged. At the restart the track was slippery initially after a brief shower, which allowed Bland to get the drive on the outside line ahead of Hylands. Adam tracked Shane’s every move, before Bland pulled clear mid race when Glenn Bell and John Christie latched onto the back of Hylands for second. Hylands broke free again nearing the end, heaping pressure onto Bland as the laps dwindled down. As they took the last lap board Bland dramatically got wrong footed by a backmarker, leaving a gap which Hylands was into in a flash. Shane tried hard to close the door but Hylands was through to the British Championship win, with defending champion Christie and Bell completing the podium.

The 50th Anniversary Race saw a fine win for England’s Chris Crane, before the coveted Leslie Dallas Memorial Trophy fell the way of Hylands as he signed off from his National Hot Rod career in fine style. Christie and Bland completed the podium in the event which also doubled as Round 3 of the Cele Services Four Nations Cup.

A great influx of visitors swelled the Classic Hot Rods ranks, with the opening heat of the Irish Open Championship on Saturday night seeing a fine win for England’s Gavin Taber ahead of Anthony Morgan and Gary Goodswen. Heat two saw local Annaghmore ace Clive Richardson take the win over Scotland’s Kenny Purdie, which then paired Taber and Richardson on the front row for the Irish Open Final.

At the green flag the front row duo sensationally tangled, taking both out of contention and allowing Goodswen through to the lead. As the laps counted down, Purdie arrived to fight for the lead, succeeding in pulling off an absolutely superb outside pass on Goodswen to land the title in empathic fashion. England’s Goodswen held on for second ahead of Scotland’s Jock Campbell, the latter having just held off a spirited Keith Chesher.

Sunday saw the Jim Purdie Memorial Trophy up for grabs, held in memory of Kenny Purdie’s father who tragically passed away at the corresponding meeting a year ago. Richardson took the opening heat win, passing Sussex driver Hughie Weaver on his way to the win. Heat two was on a wet track with most drivers struggling for grip on slick tyres. Ryan Polley had no such problems, taking a clear win over Gavin Taber and his father Adrian Taber.

From pole position Richardson rocketed away out front in the Jim Purdie Memorial Trophy, but all eyes were on a great battle for second between Gavin Taber, Craig Boyd and Purdie. Purdie was giving it his all to get a trophy in his father’s memorial race, and he produced an epic drive around the outside to not only pip Boyd but Taber too! Richardson meanwhile was well down the road and took a clear and decisive win.

Adam Hylands was doubling up between the National and 2.0 Hot Rods, and he took the win in the opening 2.0 Hot Rods Irish Masters heat with a clear win over Mark Madill and a returning Joel Richardson. Heat two saw Gary Wilson dominate in the wet conditions, finishing well clear of a battle for second between Hylands, Richardson and Adam Heatrick.

Hylands got the early break in the Masters final to lead Wilson in greasy conditions. Wilson found a way past Hylands to the lead, but attracted attention from Race Control for the manoeuvre. Hylands fought back past Richardson to challenge Wilson again, getting right alongside before slipping wide and glancing the wall. Wilson took the flag but was docked two places for contact on Hylands earlier in the race, which elevated Richardson to the title win. Hylands took second ahead of a demoted Wilson.

A huge field of Stock Rods on Saturday night, including visitors from Scotland and the Republic of Ireland, necessitated three heats to qualify for the 50 th Anniversary Trophy. Heat one fell to Stephen McCready who held off Marc Morrell, before heat two saw an overdue victory for Johny Gillespie who has had some rotten luck of late. The third heat had more close and competitive action and went the way of Micky McFall who just held off Victor McAfee at the flag.

The 50th Anniversary Trophy race saw pole man McCready lose out early on to Greer, who surged ahead with the McMillan brothers, Derek and Shane, chasing hard behind. Derek moved aside to give Shane a go at catching the leader, and that he did as the laps counted down. Shane hauled himself alongside Greer but Curtis had all under control to take the win over Shane McMillan, his brother Derek and McFall.

Completing the Sunday afternoon action were the Lightning Rods, with former World Champion Aaron Stewart and James McKinney sharing the heat wins. The final saw McKinney lead again, only to lose out to a fast charging Adam McCann. McCann was driving a fantastic race, and he took his first ever final win ahead of a closing Jordan Rochford and Nigel Jackson.