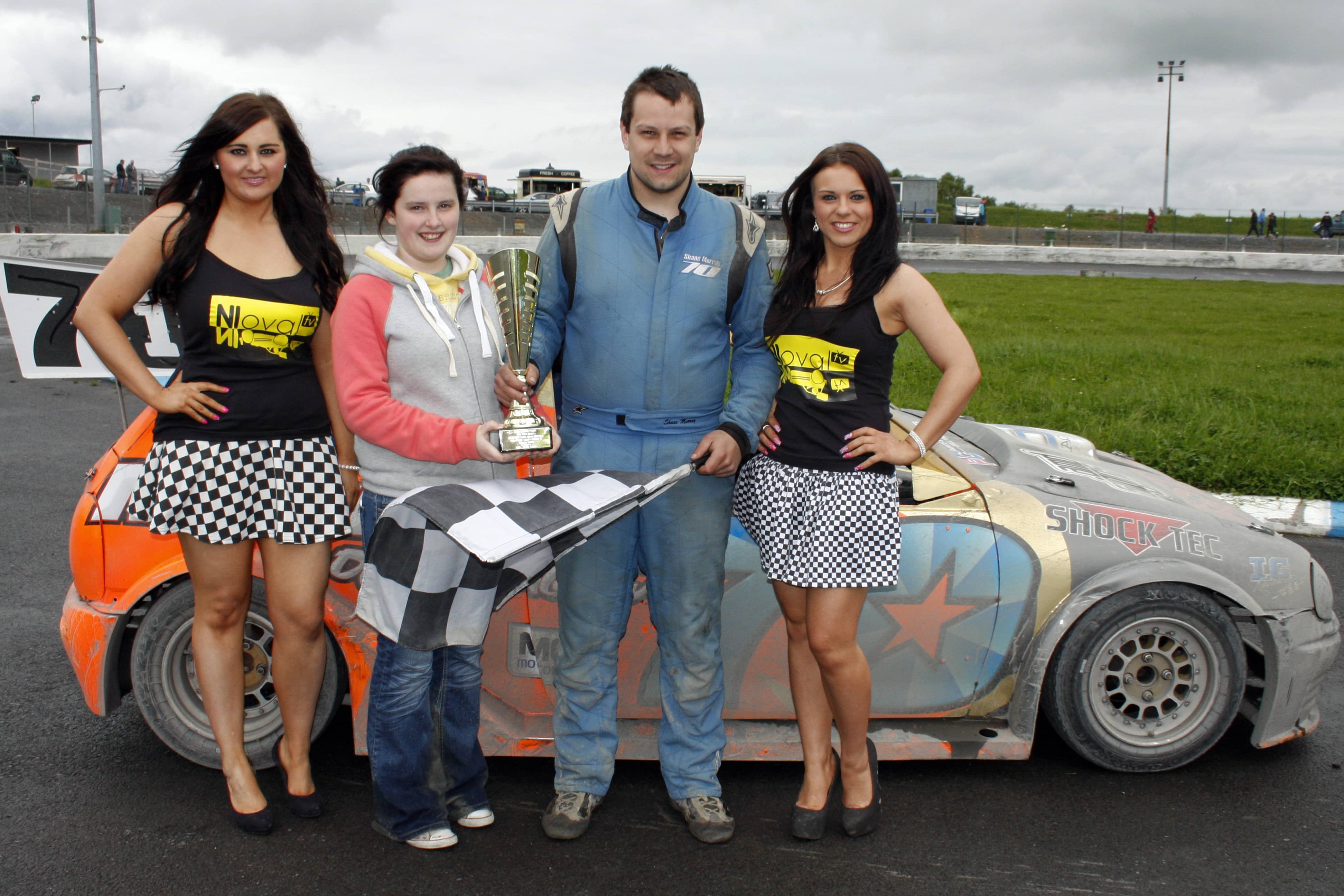 Londonderry Superstox ace Gregg Hyndman stormed back to take a last lap victory in the Superstox final at Tullyroan Oval on Sunday afternoon. On a damp track there was some excellent racing to be enjoyed, with other final victories in the LMC Trade Sales of Dungannon sponsored event falling to Shane Murray (2.0 Hot Rods), Greg McMullan (ProStocks), Adam McFall (Ninja Karts) and Ian Bolton (Reliant Robins).

Another excellent gathering of 18 Superstox, coupled with a slippery circuit, was always going to produce some top class racing on what was the opening round of their NIOval TV Series. That is exactly how it turned out, with the formula living up to their billing as the best on the local race scene at present. David Elliott was the early leader in heat one, but local Tullyroan teenager Jack Gilpin soon powered through to take the victory over Denver Grattan and Hyndman. Gilpin then repeated the feat in heat two, leading home meeting sponsor David McMenemy and Grattan after another session of top bumperwork from the drivers.

The track was somewhat drier for the final, and as the faster drivers starting towards the back got well and truly stuck in, McMenemy made good is escape at the front. Fellow Dungannon man Nigel Sinnamon soon challenged for the lead, but try as he did Nigel couldn’t unseat McMenemy from the top spot. Then backmarking Irish Champion Kyle Beattie, himself recovering after being spun out, got mixed up with the two leaders, sensationally taking both out of the running! That gifted the lead to Hyndman, but he soon lost out to a fast moving Gary Grattan with just four laps to run. Grattan then went to shove the now backmarking McMenemy out of his way, only for it to slow him dramatically. Hyndman went in for the kill as they took the last lap board, and surged ahead to take the flag in emphatic style! Jeff Minish grabbed second at the line ahead of Nathan Beattie and the ailing Gary Grattan.

The 2.0 Hot Rods were contesting the opening round of their TRM Tullymore Road Motors Challenge Series, and the afternoon was littered with numerous penalties as well as some close racing. European, National and Irish champion Adam Hylands took the opener over Mark Madill after Stephen Emerson and Shane Murray were both dropped places by the Race Steward. Heat two saw a welcome victory for Portadown’s Stuart Cochrane after a run of horrendous luck for the teenager so far in 2014. Adam Heatrick chased him over the line, which was enough to grab pole position for the feature race final.

The closed grid final set the scene for a dramatic conclusion to the day’s action, and it failed to disappoint. Heatrick’s early lead came to nothing as he ran wide and allowed Cochrane to take it up. Stuart had no answer to the pressure from the World and British Champion behind, and Murray soon powered ahead. Hylands had fought back to second, but despite using every inch of the track and every trick in his locker he couldn’t find a way past. Murray came home to take the win, ahead of Hylands and Heatrick.

Visiting European Champion Jazz Moore from Scotland set a blinding pace during the ProStocks heats, taking the flag in both from the rear of a 22 car field. It was superb wet track driving from the Scot, who led home Stuart Agnew and Jason Kee in the opener. On his third visit from four meetings this season, Moore repeated the dose in heat two, with Kee this time second and Agnew in third.

The final showdown saw Neil Hyndman lead the early stages, before Garvagh’s Stephen Boyd took up the running just before half distance. Moore was menacing in the places as he aimed to complete the hat-trick, but after trading a few blows with Alan Haugh they both allowed Greg McMullan to slip through past them. McMullan was in determined mood and held on all the way to the flag to take the victory, with Haugh and Dean Fleming ultimately filling the podium.

Once again the young Ninja Kart pilots produced three super races on the tricky circuit, showing car control way beyond their years. Ballymena’s Adam McFall was a double winner as he took victory in heat one and the feature race final to rubber stamp his current dominance in the formula. Matthew Nicholl was a close runner up in heat one, before the duo swapped places in heat two which saw Nicholl take a welcome win. Sam McNiece gave it his all in the final as he took the fight to them both, but at the line McFall took yet another trophy over Nicholl.

JayJay McConaghie was the star of the Reliant Robins heats, grabbing both wins whilst John Stewart went for a monster rollover across the infield in the opener. Ian Bolton had been runner up in both heats, but when the silverware was at stake he powered ahead and just pipped McConaghie on the line.

Racing continues at Tullyroan Oval on Saturday night, May 24th(6.30pm) when the penultimate round of the National Hot Rods World Series tops the race programme. Also in action will be the Stock Rods and Junior Productions, whilst there will be a grand welcome home for the new Lightning Rods World Champion Winston Weir as they contest the opening round of the 2ke Engineering Challenge Series.