Kenny is King at Tullyroan!! 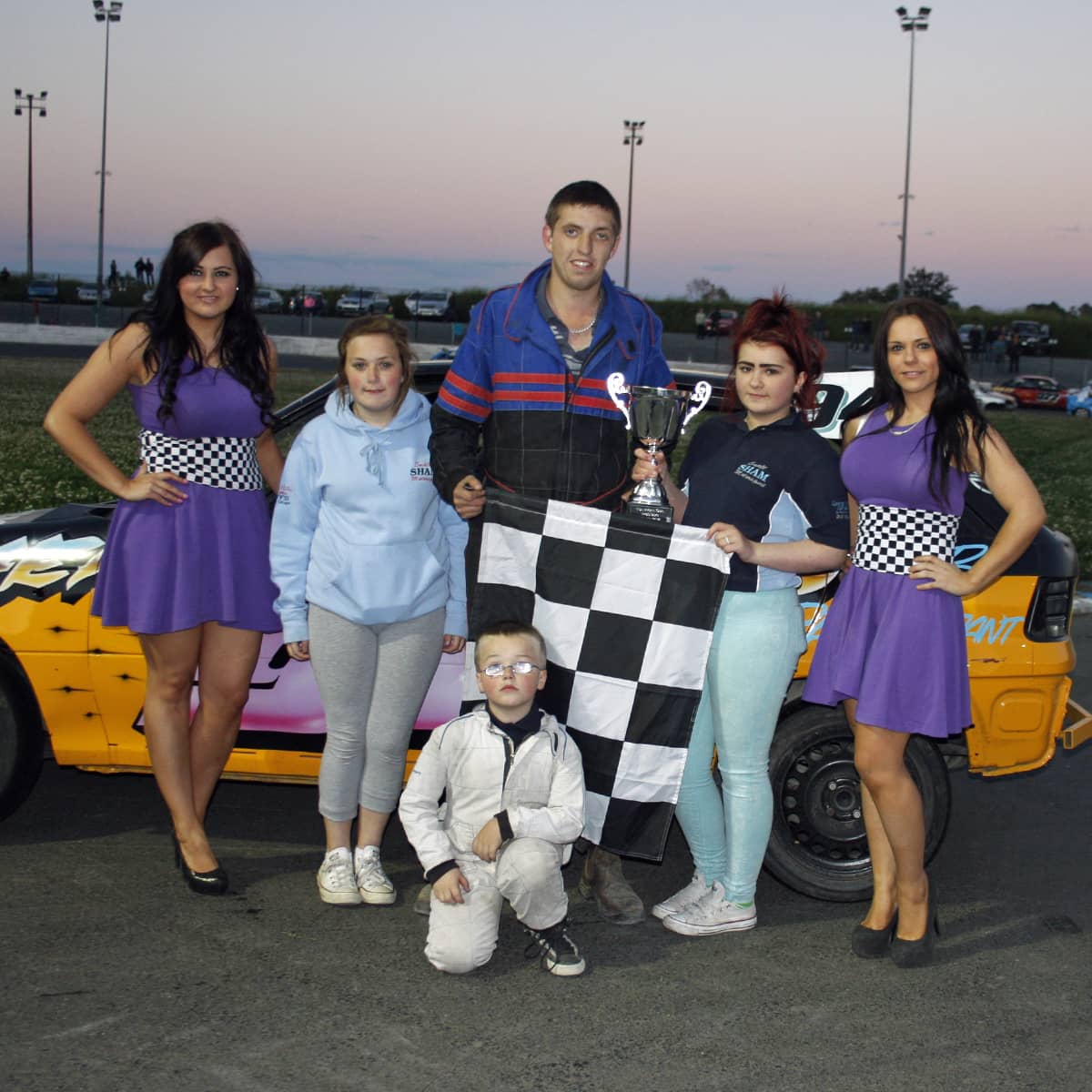 After a lengthy enforced absence from the ovals, Portadown’s Kenny Robinson bounced right back to form when he took a faultless hat-trick of wins in the Lightning Rods at Tullyroan Oval on Saturday night. On an evening of more excellent racing in the summer sunshine, young Ryan McClure was the winner in the second round of the Superstox NIOvalTV Series, whilst JayJay McConaghie (Reliant Robins), Davy Wright (ProStocks) and Matthew Nicholl (Ninja Karts) were the other winners in the ASC Cars of Ballymena sponsored event.

A healthy 18 car turn out in the Lightning Rods produced some fine entertainment during the evening, with some fast and fair racing the order of the day. As the novice graders squabbled amongst themselves in heat one, Robinson quickly worked his way to the head of the pack and on to record his first win of the night. World Champion Winston Weir worked his way through to second in the end, ahead of an impressive run for Mark Corry in third. Robinson once again made easy work of the second heat, this time heading home a huge battle for second which finally fell the way of Jordan Rochford over Nigel Jackson. In the mist of the drama Weir found himself excluded after a clash with Dermot Tynan which saw the latter spin out onto the centre green.

Robinson’s brace of heat wins saw him automatically upgraded to the blue grade for the final, but he was soon off like a hare and chasing the top positions. Once he hit the front there was going to be little doubt as to the winner, and he duly swept home to record the clean sweep. Jackson closed the gap once he had made it up to second, but he just couldn’t get onto terms with the hat-trick hero who deservedly took the flag to the delight if his fans. Health problems have limited Kenny’s appearances over the past year or so, but what better way to announce your return to action?

The second round of the lucrative NIOvalTV Series for the Superstox produced three enthralling races, and a surprise final winner too! There were 18 cars once again for their opening heat, with the bumpers getting put to full use as always. Lady racer Liscinda Smyth showed an excellent improvement in pace to lead the early stages of all the races from the white grade, with Gregg Hyndman slipping past in heat one before Denver Grattan made his move to land the win. Hyndman made no mistake in heat two, holding his nerve after a lengthy mid race delay following a hefty knock for Mark Hughes. Belfast ace Gavin Fegan produced a last bend lunge to try to unseat Hyndman from the premier spot, but the Londonderry man held on as Mark Murphy capitalised to pip Fegan for second at the line.

Smyth again led the opening tours of the final, but Ryan McClure kept his best race of the night to last and soon surged ahead. The star men were struggling to get on terms, and when Grattan had his engine go sick once he had made it through to second McClure was home and dry. Nothing can take away from his pace, and he proudly took the trophy and a brand new race tyre courtesy of series sponsors NIOvalTV. Irish Champion Kyle Beattie made up for a horrendous evening by salvaging second in the feature race, ahead of Hyndman in third.

It was Tullyroan Challenge Cup time for the Reliant Robins, and current form man JayJay McConaghie made little mistake in the opening heat to land the win. There was a rollover for John Stewart in this one, as well as a huge spill for lady racer Rachel McMillan who almost vaulted the barriers on turn four, fortunately without injury. Billy McClean then celebrated his return to racing with victory in heat two over Ian Bolton and McConaghie.

McClean led the opening laps of the final, with McConaghie soon finding a way past into the lead. McClean then lost a wheel which pitched him into yet another rollover! McConaghie made no mistake on the restart, racing home to victory over Bolton and fellow Balymoney man Ivan Elder. Another huge field of ProStocks once again included welcome Scots visitor Jazz Moore, and as always were full of drama all round the race track! Davy Wright made no mistake in an action packed opening heat, leading home last week’s final winner Alister Robinson and Cyril Hawe. Robinson turned the tables as he led Wright across the line in heat two to set up a nail biting final which the same duo would dominate. Neil Hyndman led the way, before the on form Robinson hit the front with just five laps remaining. Wright was tracking his every move though, and on the last lap went in for the kill. He forced the leader wide, and despite Robinson’s best efforts to fight back it was Wright who claimed a superb win and a double which will see him rise to the blue grade for the next meeting.

The young stars of tomorrow in the Ninja Karts were once again at the top of their game, streaking around the oval at breakneck speed despite their tender ages! Ballykelly’s Matthew Nicholl and Ballymena’s Adam McFall were the stars during the evening, sharing the heat wins between them as they showed some great skill. The final boiled down to a fight between the two once they had hit the front, and the big crowd were treated to an excellent dice all the way to the line. There was rarely any more than inches between them, with Nicholl in front when it mattered most to take the ASC Cars Challenge Cup. McFall was a gallant runner up, with Aaron Ward notably recording a treble of top three places with the final place on the podium in the final.

There is now a short break in racing action, with the next meeting not until Sunday July 20th (2pm), when the 2L National Bangers return to thrill the race fans. Ninja Karts, Superstox, 1300 Stock Cars and Junior Productions will also be in action.