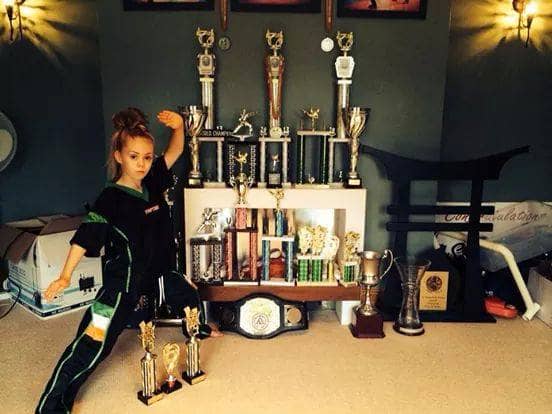 And, what’s more, she’s from Keady!

Jesse Jane McParland is a remarkable young lady and a huge star in the making.

Jesse Jane has earned herself the name of ‘Golden Dragon’ and is becoming something of a stand out figure within the world of martial arts and kickboxing.

She had been actively training ahead of the WAKO event – the Cadets and Juniors World Championships – which began in Rimini, Italy, last Saturday, September 6.

While the competition officially ends this Sunday, September 14, Jesse Jane will be making her way home and the people of Keady, so rightfully proud of her global success, are planning a special homecoming in the centre of the town.

Jesse Jane is expected to arrive in the South Armagh town at 12.30pm this Sunday, and people are asked to come out and give her a good Keady welcome!

A remarkable success story for one so young and so much more to come – a huge well done Jesse Jane!!!