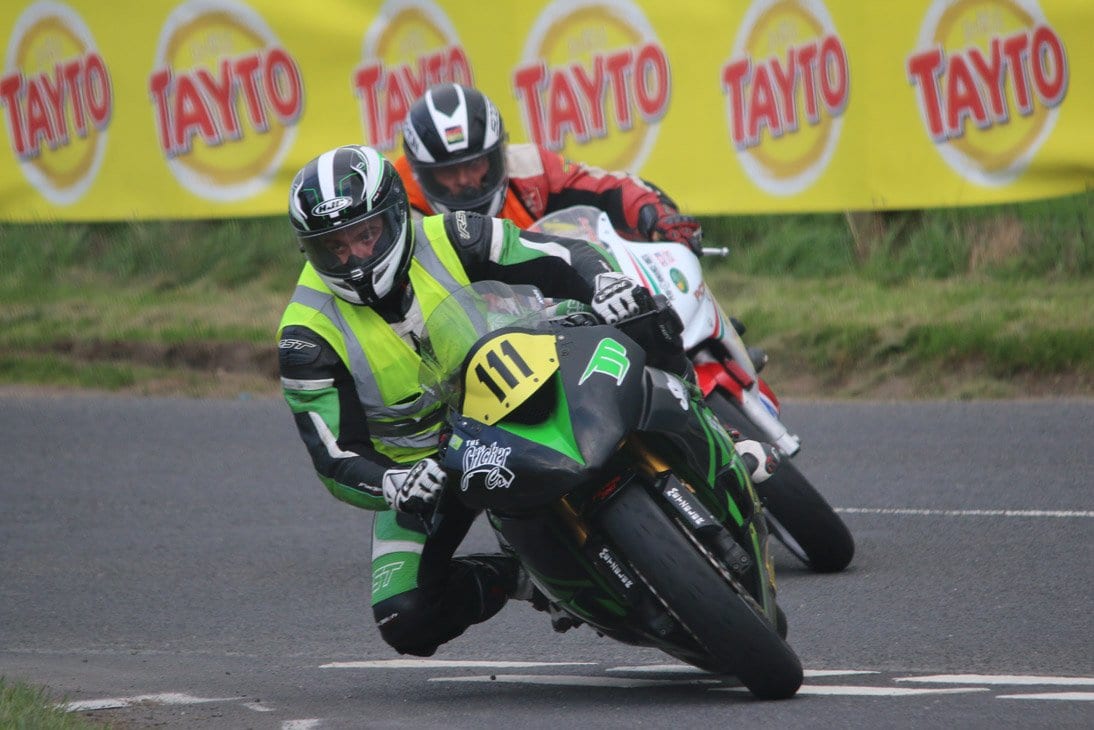 Race ace Guy Martin has pulled out of this weekend’s Tandragee 100.

It is understood that gearbox issues had led the sporting legend to withdraw from the event, one of the highlights of the racing calendar, organisers by the North Armagh Motorcycle and Car Club.

He had been due to compete on his BSA Rocket Three bike in the Classic Race.

Martin was a huge coup for the organisers of the annual event who were delighted he had agreed to return to the Co Armagh event.

But they have confirmed that he will not now be taking place in a statement.

It is with regret that we confirm that Guy Martin has withdrawn from this year’s Tandragee 100,” it read.

“Guy has not taken this decision lightly and had been looking forward to the event.

“The Club appreciates all the efforts Guy had been making to get his bike ready to try to get here and support his decision wholeheartedly.”

While it is a blow to the event, it will not overshadow an event which draws huge numbers of riders, support teams and spectators to the town.

A host of other big names in the sport will be there including William Dunlop, Derek Sheils Derek McGee, Micko Sweeney, and rising stars Joe Loughlin, Paul Jordan and Adam McLean as well as favourites such as Davy Morgan, Nigel Moore and Barry Davidson.

This year will also see the introduction of a ‘Spirit of Tandragee 100’ award in honour of – and with permission of the family of – Italian rider Dario Cecconi, who died after crashing during last year’s event.

It will not be presented for being the first, the best, the fastest…but for demonstrating something truly wonderful, a willingness to go to great lengths without much support to participate, to live for the moment, proving that they are the heart and soul of Irish Road Racing at Tandragee…just like Dario did!

Sean Halliday, from Northern Ireland but now living in the USA, has also contributed to this award, while Dario’s family have also very generously donated a sum of money to be presented along with the trophy.

Italian rider Enrico Rocchi will make his road racing debut on the Armagh course – both as a fulfilment of a dream and as a tribute to close friend Dario.

The Tandragee 100 Course was, voted 4th Best Road Racing Course in the World (only the TT, Macau & UGP came higher) and the word is spreading as the ever popular duo Michal Dukoupil and Veronika Hankocyova from Czech Republic will be joined by Daniel Mettham (New Zealand), Kenny Hinck, Chris Meyer, Mathias Winkenjohann and Vassilios Takos (from Germany); Enrico Rocchi (Italy) and Mel Gantly (Canada) who together will provide a truly international flavour to this year’s event.

The ladies are showing their strength in numbers as this year regulars such as Yvonne Montgomery, Sarah Boyes and Veronika Hankocyova will again be joined by Melissa Kennedy and newcomer Aileen Keenan.

This year’s whopping Tandragee 100 Entry includes over 360 entries with 9 competitors hailing from Overseas and 36 circuit newcomers, this is proof that road racing is still very much alive and kicking in the shallow hills of County Armagh!

As always costs have risen this year however we organisers delighted to be able to offer a prize fund of approximately £11,000!

All the races this year will be Irish/Ulster Championships Races with the exception of the Forgotten Era and Supermono classes.

They would appeal for everyone to support the Around A Pound Tandragee 100 by purchasing a programme as this is one of the main revenue streams for the event and/or make a donation in the bucket with the programme sellers.

The practice session will take place as usual on Friday as usual and there will be road closures in place to facilitate this.

A fantastic day’s racing then lies ahead on Saturday, with races, sponsors, prizes and full details as follows:

The opening race of the day will be the McCrum’s Motorcycles First Open Race – McCrum’s Motorcycles is a family run business formed in February 2013. Wes also very much enjoys being part of the community, running weekly Wednesday runs during the bike season, hosting an Annual Bikers & Trikers Charity Run in July and an Annual Charity BBQ in August.

The Junior Support Race for 201-400cc machines is sponsored for the second time by Principal Insurance. Founded in Manchester in 2011, Principal extended its operations into Ireland by opening its Dublin office in 2015. It has grown quickly and now arranges cover for nearly ten percent of all road registered riders in Ireland. It is also a significant player in the UK motorcycle insurance market and along with its specialist car and van operations, now boasts over 30,000 policyholders.

CVRS Media – Intelligent Data Systems are the sponsors for the Supersport 600cc Race. The Club is delighted to welcome on board Clive Neame who has confirmed CVRS will sponsor the 600cc Race for 3 years. Whilst bringing sponsorship they are also committed to research and develop in these key areas of the Sport: Rider and Team Revenue through Digital Media; and Safety enhancements through use of Cameras on Bikes.

The Phillip Riddell Memorial Classic Championship Race is sponsored by 21st Century Backcare. Under the banner of The 21st Century Backcare Raymond & Trevor who are sons of the late Dick Knox, long time Club President and motorcycle and motor car racer extraordinaire are again overall sponsors of the Classic Race which is divided into three classes that have been individually sponsored.

Up to 250cc Class sponsored by Donald McMorran, proprietor of Millside Engineering who has been a long-time supporter of Tandragee and lives on the course on the Markethill Road. He has 30 years engineering experience and has produced precision parts for the riders.

Race for 251cc – 350cc class is sponsored by R Heatrick Ltd a local building firm who we welcome again.

Race for 501cc – 1000cc class is sponsored by Woolsey Concrete Ltd who have been supporting the Tandragee 100 over a number of years.

This year Tayto NI Ltd, who are our longest standing sponsor, are the sponsors of the 650cc Supertwins race. Tayto NI Ltd whose products are well known not only the length and breadth of Ireland but all over the world, will again have Mr Tayto and their mobile unit at the event. Thanks again to Stephen Hutchinson and in particular his marketing manager Bob Brown.

The Supermono Class is sponsored by CVRS Media – Intelligent Data Systems who have come on board for three years.

The 250cc GP Championship sponsored by Simon Magee Plumbing & Heating. The Club is delighted to have Simon on board again this year. Simon provides a top class plumbing and heating service.

The City Autos Lightweight Class is open to 125cc grand prix machines. City Autos Ltd owned by club member, Ivor Hadden, has rightfully gained a reputation for carrying out work to the highest standard in a friendly manner.

The 400cc Supersport Class is sponsored by Groucho’s Cafe Bar & Music Lounge the place to be in Richhill. The Club again welcomes proprietor Peter Lyness.

The Forgotten Era Class is sponsored by Downshire Coaches who have been with us for a number of years and who kindly supplied one of their luxury coaches for the Roads Inspection.

Around A Pound Tandragee 100 Senior Open Race, the feature race of the day which is sponsored by our overall sponsor and this race will have prize money of over £2000. The winner will collect £1,000.

In collaboration with CVRS Media – Intelligent Data Systems the North Armagh Motorcycle & Car Club (Tarmac Section) Ltd are trialling Tandragee Guardian, a safe spectate initiative. Medical ID Cards will be issued with each programme to give information to First Aiders and/or by entering your details onto Guardian’s online secure website. Tandragee Guardian is all about exploring innovative ways to enhance health and safety for our volunteers and our visitors. We are delighted to be trialling the Medical ID Card and online registry at this year’s Around A Pound Tandragee 100.
Competition

This year ONE of our Race Programmes will have a message somewhere inside. If yours is the winning programme it will contain details of how to collect your prize of VIP hospitality and an official Club Polo Shirt. Please support the event by buying a Programme and you’ll be in with a chance.

The Volunteer of the Year Award in memory of Club Member Florence Burns. Florence was well known in racing circles and had been a stalwart of the Club for many years – it is because of Volunteers like Florence that all of our road racing events can take place. Florence is very sadly missed by the Club.

The Eddie Sinton Memorial Trophy – awarded for the first 600cc machine to finish in the Tandragee 100 Race.

The Philip Riddall Memorial Trophy – awarded at the discretion of the Riddall Family.

Milne Racing have sponsored an award of £200 to the Man of the Meeting and £100 for the Fastest Lap of the Day.

David McWaters, MCW Photography/Dunlop Racing Club (who sponsor Colin Dunlop) has kindly donated £100 for the Best Newcomer in the Junior Support Class and £50 to the Club.

Club Charity of the Year – Jonah’s Fight – #JonahsFight – This year’s chosen charity is Jonah’s Fight, which was set-up in honour of Jonah Ryzo Carvalho Carceres who died from a brain tumour at two years of age after fighting so hard for a diagnosis. The charity’s main aim is to make sure all children have access to MRI’s by funding private screenings when they don’t feel like they are getting the help they need, and to just try and make the hardest fight of a family’s life, just that little bit easier.

There will be Jonah’s Fight representatives collecting funds in the paddock…please give generously as the charity is not yet well known and they need every penny they can get.