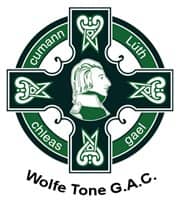 THE senior footballers of Wolfe Tone and St Enda’s, Derrymacash, travelled to Tír na nÓg on Thursday evening for their penultimate game of the league campaign.

An early Tír na nÓg goal left the Tones chasing the game from the very start. The home team followed this up by scoring a penalty, which even Tír na nÓg supporters were questioning.

It was the Portadown men who started the second half strongest and a third goal left the Tones with a mountain to climb.

But four consecutive points from Emmet Haughian, Declan Lavery, Kieran Murray and James Lavery brought them right back into the game, and only for a number of wides the Tones would have pulled closer.

It must be said, however, that the home side were also guilty of a number of wides but two points regained their six point cushion, before Emmet Haughian finished off the scoring to leave the final score Tones 0-10 Tír na nÓg 3-6.

The Under 14s, meanwhile, had a comfortable win at home to Tír na nÓg on Friday evening at the club. The Under 10s had a busy week and travelled to Derrytrasna last Monday night, where they had comprehensive wins in the two games against sarsfields. They were back at home on Sunday morning, running out winners against Maghery on a scoreline of 0-14 to 0-6.