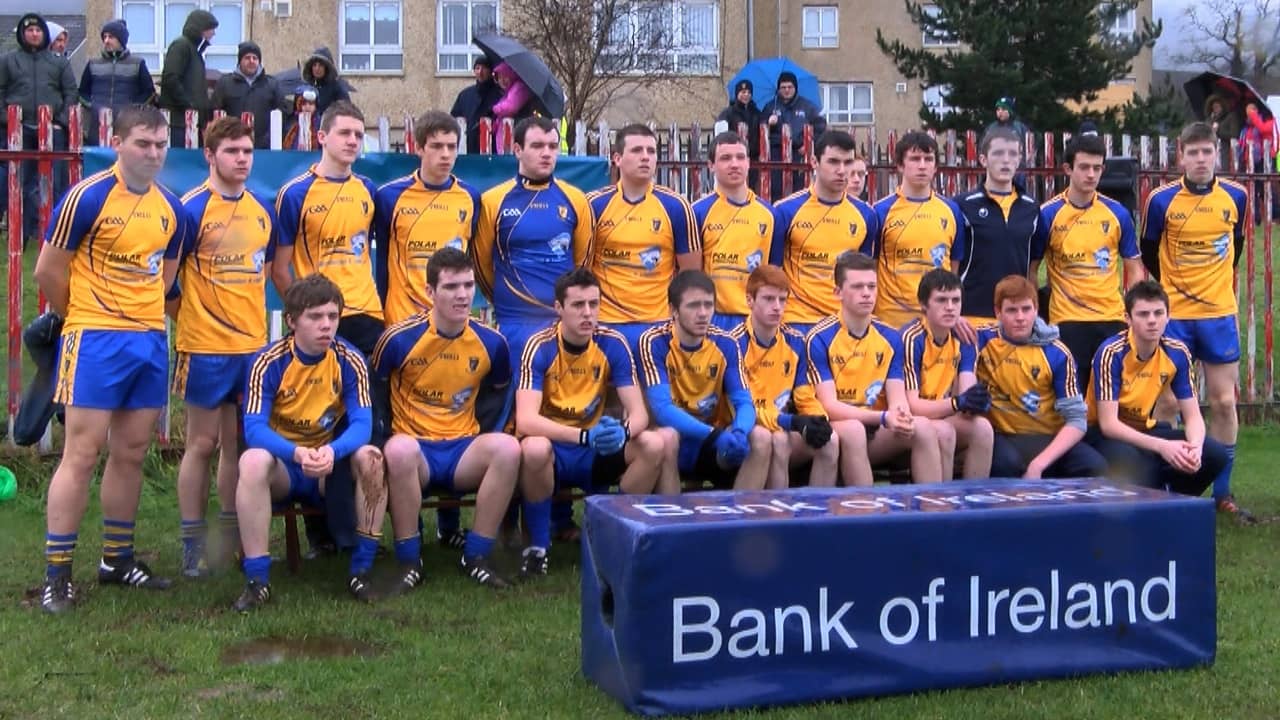 Silverbridge Harps Minors have had a remarkable, ground-breaking  season. They lifted  the Armagh Div 1 League title with a win over St Pat’s Cullyhanna, without conceding a match along the way. Their Championship campaign was equally impressive, right from their first round encounter with Pearse Ógs. They kept management and supporters on tenterhooks right to the very end after a late Pearse Ógs goal almost knocked them off course. They kept their heads and pushed on for a three point win in that match.

Their performance in the semi final against Killeavy was even more heart-stopping.  They came from eleven points behind to win by four after extra time. After a nineteen year wait they finally won the Armagh Minor Championship title in 2013 and lifted the Frank Hanna Cup after their impressive defeat of favourites Dromintee  (3-10: 1-11). There is an exciting mix of talent and experience on this squad. Many were part of the 2009 U14 County Feile team, the first Feile title for Silverbridge in 25 years. A large number also have the experience of winning the U21 Intermediate Championship in 2012 and some have achieved at various levels in Colleges competitions.

Having qualified for the Ulster Minor Tournament in St Paul’s Belfast, they would have to wait almost 8 weeks before their first competitive match. They met Cavan champions Ramor on 21st Dec. Despite the lack of competitive football they had a pulsating win over Ramor of Cavan. It was a game where they showed tremendous character as they had to come from behind on a number of occasions.

A Jarlath Óg Burns goal in the first half gave them the lead which they held until half time. Two second half Ramor goals saw the ‘Bridge trail by four points entering the final ten minutes of normal time. However, an Eoghan Burns goal followed by a Paddy Reel free drew the sides level at the full time whistle (2-06 to 2-06).

Determined to regain their advantage, Ramor forged ahead again in extra time to go three points up. Silverbridge never at any stage looked like a team who were going to finish as the defeated side. Then, with just five minutes left in extra time a penalty for Silverbridge. E Burns blasted the right hand corner of the net and the sides were level again! Fierce defending and superb team work kept the scores locked into the very last minute of the game. Was it to be another draw? With literally seconds to go a free was conceded forty yards out in Silverbridge’s favour. Paddy Reel stepped up to the mark with a wonderful strike which brought Silverbridge into an Ulster Minor Semi Final for the first time in its history. A remarkable show of team work and a heart stopping comeback – yet again! Final  score: Silverbridge 3-07 Ramor 2-09 AET.

The semi final encounter against Monaghan champions Carrickmacross on St Stephen’s Day promised to be a close affair with both teams having proved their worth in the earlier stages of the competition.

Silverbridge opened the scoring with a free converted by Eoghan Burns in front of the goals. Carrick, however, took the game in hand for the next 15 mins and built up an impressive tally of unanswered scores to give them a comfortable 8 pt lead (0-01:2-03). Paddy Reel finally broke the taboo to add another point to the Silverbridge scoresheet which was soon  followed by an E Burns penalty conversion. With a few changes around midfield Silverbridge confidence started to show signs of recovery. Peter Reel tipped over a point from play and Pauraic Keating netted a goal on the rebound off the post to level the scores. Just before half time Pauraic hit the back of the net again to leave it Silverbridge 3-03: Carrick 2-03

In the second half Silverbridge opened the scoring again, this time with a goal fisted in by Aodhán Quinn. E Burns added to the scoresheet with another point and Aodhán replicated his earlier goal with poise to show a scoreline of 5-04 to 2-03.

It is worth noting that Carrick had not registered a score since the middle of the first half.

The next 4 pts came from Paddy Reel, James McKeown, J Óg Burns and Cathal McKeown as Carrick struggled to find their first half form. In the final minutes Carrick found the net but Paddy Reel made sure the ‘Bridge had the last say with one final point. Final score: Silverbridge 5-09 Carrick 3-03

Silverbridge’s strength lies in their defence and impeccable respect for teamwork. Each player has a job to do and never seems to stop doing it even when the scoreline is not in their favour. Supporters and observers unaminously comment on the holistic teamwork ethos instilled in this remarkable group of lads by managers Declan McVerry, Joe Crawley and Michael McGeeney. ‘There are no stars on this squad – each player is a star.’

An Ulster Final against Derry’s Watty Grahams Glen who had their hopes pinned on three in a row, had all the promise of excitement and drama. The exceptionally wet and windy conditions meant scores were more difficult compared to previous matches. With the wind in their favour in the first half, Silverbridge got the first score with an Aaron Duffy point from play. Glen hit back with two points before a penalty for Silverbridge got converted by Eoghan Burns. Just before half time a Glen point kept just one between the teams.

The second half saw Glen push ahead with 6 unanswered points before a point from a free from E Burns got Silverbridge on track again. Glen, however, stayed strong in their defence despite some superb defending by Silverbridge and were to finish with one last point to leave a final score of Silverbridge Harps 1-02: Watty Grahams 0-10. Silverbridge battled to the very end in what Glen later described in a tweet as “as good a battle as we got from anyone in 3 years”

The bar has now been raised yet again by Silverbridge Harps as they have broken new ground for their Club and made a remarkable impact in so many ways from their ‘never say die’ attitude to their ethos of ‘teamwork to the end’. Well done to the entire team and management and we all look forward to seeing what the future brings for them in Gaelic football circles.