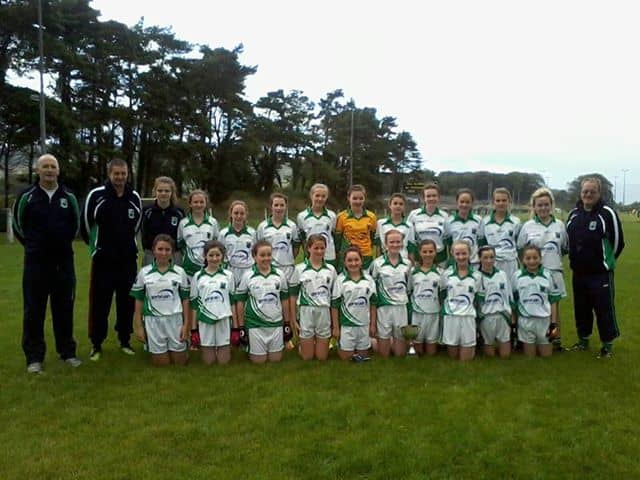 PRIDE of place in Shane O’Neill’s GFC this week goes to the U14 girls (pictured), who were crowned championship winners last Friday evening with victory over Crossmaglen.
The Shanes started the game brightly with captain Blaithín Mackin scoring freely from midfield and she had good support from Jessica Watters, with Kirsty Murphy in defence and Sharmaine Hillen in the forward line chipping in with 1-1 during the first-half.
The Shanes continued to apply the pressure in the second half, scoring three more goals and further points from Ciara Jones and Chloe McCabe. A feature of the second half was the excellent defending of Ellen Hannaway and Leanne Lennon against a Crossmaglen team who, in fairness, battled on to the end despite the scoreline.
Indeed, the score-line would have been a lot closer if it wasn’t for some important saves by goalkeeper Lauren Diamond.
After the game, Armagh County Board rep Sharon Reel presented the cup to winning captain Blaithín Mackin.
This was Shane’s third U14 Championship success following previously wins in 2009 and 2010. The girls’ next aim will be to complete the League and Championship double – the Shanes are unbeaten in Division 1 League with three games remaining.
It has already been a great year for the girls, having taken part in the All-Ireland Féile in Derry and great credit must go to all the girls and their management team of Paul McArdle, Paci Maginness, Keith Shields and Alison Watters, who have worked hard all year and are getting their just rewards for it.
The Shane O’Neills team on the day was: Lauren Diamond, Leah McKeon, Leanne Lennon, Abby Shields, Shanice O’Hare, Ellen Hannaway, Kirsty Murphy, Blaithín Mackin (c), Jessica Watters, Ciara Jones, Georgia Smith, Orlagh McKenna, Sharmaine Hillen, Orlaith McArdle, Lisa Devlin. Subs all played in the second half: Lia Robb, Jade Beattie, Chloe McCabe, Ruth O’Gorman, Ciara Maginness. Unavoidably absent: Chloe McAllister, Clíodhna Sloan, Sorcha McDonnell.
SENIORS
It was a disappointing erformance from the senior footballers on Friday evening, meanwhile, when they fell to a three point defeat away to Cullovil 1l–11 to 0–11. The Shanes made a slow start to the game and found themselves 1–1 to no score down in the early stage,s but five points in a row, three from Brendy Mackin and two from Neil Paul Lennon, put the Shanes one ahead.
Culloville levelled the game soon after and they went ahead minutes later with another fine point and they might have led by even more but for a fine save by the Shanes’ keeper Joe Goodwill. A Peter O’Brien free tied the game again but Culloville fired over their fourth point of the half to put them ahead by one again, only for O’Brien to level things with another pointed free.
Another great save by Joe Goodwill kept the game all square, but Culloville got the last point of the half to lead by one at the break, 1- 5 to 0 – 7.
The Shanes made a brighter start to the second half with points from Neil Paul Lennon and Paul O’Rourke putting them one up with Culloville replying with a pointed free. Another pointed free from Lennon restored the Shanes’ one point advantage, only for Culloville to reply almost immediately to tie the game once more with 10 minutes still left on the clock.
Neil Paul Lennon fired over his fifth point of the contest but that was as good as it got for the Shanes, as Culloville reeled off the last four points of the game to claim the win.
Next up for the seniors is the first round of the championship next Saturday against Tír na nÓg.