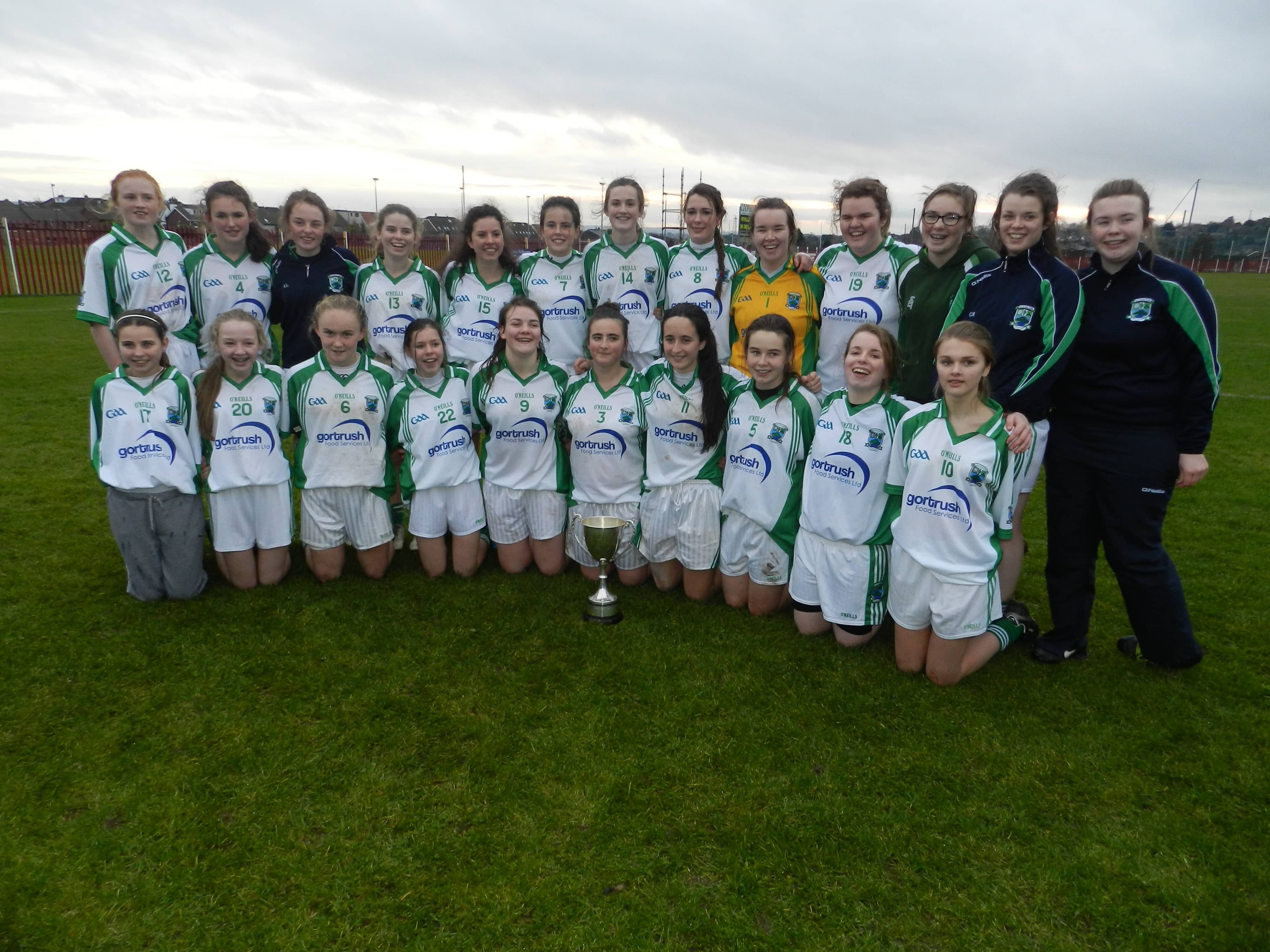 The Shane O’Neill’s minor girls created a bit of history on Saturday when they were crowned Ulster champions, a few short weeks after capturing the Ulster Junior title.

Moville, the Donegal champions, were the opponents in Belfast on Saturday and they be proved to be a very formidable side, with the Shanes triumphing by three points in the end, 6 – 13 to 5 – 13 after what can only be described as one of the best games of football anyone in attendance has ever witnessed. Moville made a great start to the game and found themselves three points up in the opening minutes before Aimee Mackin got the first score of the game for the Shanes with a well taken point. Moville edged further ahead with a goal and another good point but Mackin replied for the Shanes with their first goal of the contest only for the Donegal side to hit the net once again to put them into a six point lead.

A great ball from Aoibheann Jones found it’s way to Aimee Mackin who rattled in her second goal before her younger sister Blaithin netted again minutes later to bring the sides level. The Shanes then went ahead for the first time when Aimee Mackin fired over another great point and the same player was on target again soon after with a cracking point to put her side two up. Moville continued to their play slick pass and move game and they hit four points in a row to put them back in the lead again but points from team captain Moya Feehan and Aoibheann Jones tied the contest once more.

Aimee Mackin’s fourth point of the half put the Shanes one ahead again but Moville finished the half the stronger side and they fired over four points on the trot to lead by three at the break, 2 – 12 to 3 – 6.

The Donegal champions made the best possible start to the second period with two goals in as many minutes to put them nine points to the good and firmly in control of proceedings.

The Shanes were really under the cosh at this stage in the game but a goal and a point from Aimee Mackin reduced the deficit to five only for Moville to respond again in great fashion, scoring a goal and a point of their own to put them nine ahead again with less than fifteen minutes remaining on the clock.

It looked to be all over for the Shanes girls at this stage but we really should have known better because if nothing else they have spirit, guts and determination in abundance and this came to the fore in the final ten minutes of the contest as the Shanes fought their way back into the game.

Each and every one of the girls, from the goalkeeper out, gave it their all and a quick fire goal and point from Aimee Mackin had the Shanes back to within five points and further three points on the bounce from the same player brought them back to within two. The Shanes were well on top of their opponents at this stage and were pushing hard to edge ahead going into the final few minutes and Aoibheann Jones duly obliged when she coolly slotted the ball to the bottom corner of the Moville net to put her side one ahead with time almost up.

Another Aimee Mackin point gave the Shanes a bit of breathing space and she fired over another soon after to put three between the sides with the game in injury time. Moville pushed forward in one last desperate attempt to salvage the game but the Shanes defence held firm and kept their opponents at bay as the referee blew the final whistle to signal another Ulster title for the Camlough side, 6 – 13 to 5 – 13.

At the presentation ceremony Aimee Mackin was named as the deserved player of the match before Moya Feehan stepped forward to collect the Ulster Minor Championship trophy.

After a bite to eat in the St Paul’s club the girls headed back to Camlough to be greeted by great scenes of jubilation from their supporters at the club-house.

On behalf of everyone associated with the club I would like to take this opportunity to congratulate the girls and their managers and mentors on their terrific achievement and the pride that they have brought to the Shane O’Neill’s club – to win one Ulster title is fantastic but to win two in the one year is something really special, well done everyone.