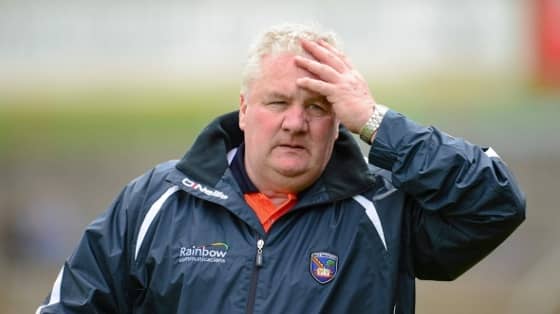 Paul Grimley, Armagh Senior Football Manager, has tendered his resignation to The Management Committee of Armagh County Board.

In a statement released by the Armagh County Board, they said: “Paul strenuously argued that it was the right thing to do as he had stressed on his appointment two years ago that he would embark on a development process and that he thought that the process was ready to progress to another level.

“The Management Committee of Armagh County Board wish to acknowledge the contribution of Paul, in terms of his energy, commitment, loyalty, vision and selflessness, to Armagh.

“Paul Grimley is big in stature and gargantuan in his commitment to Armagh. On behalf of everyone involved in Armagh we extend a hearty thank you to Paul and wish him well.

“Paul has asked for a period of rest and has expressed a desire to be able to relax with his family over the next few weeks.”

Massive respect for PG & sad to see him step down.Always believed in us & has gave us a platform to push on.He will not be forgotten #topman

Huge credit must be given to Paul Grimley despite what people may think for transforming Armagh's season around. Armagh to the backbone.

Always had great respect for Paul Grimley, as he retires as manager of @Armagh_GAA Senior Team, a gentleman #Grimbo pic.twitter.com/stRjlHP6tI

Go on mcgeeney! And thanks to Paul grimley for what was a v exciting championship run @Armagh_GAA #mcgeeney

Paul Grimley leaves @Armagh_GAA in a better place on his departure. Always found him to be honest, straight talking and courteous. #niceman

Thank you to Paul Grimley for his two years as @Armagh_GAA football manager and for finding some exciting new talent for the team! #Grimbo

Huge credit has to go to Paul Grimley who steps down as Armagh Manager today. He got rid of dead wood and gave a lot of young lads a chance.