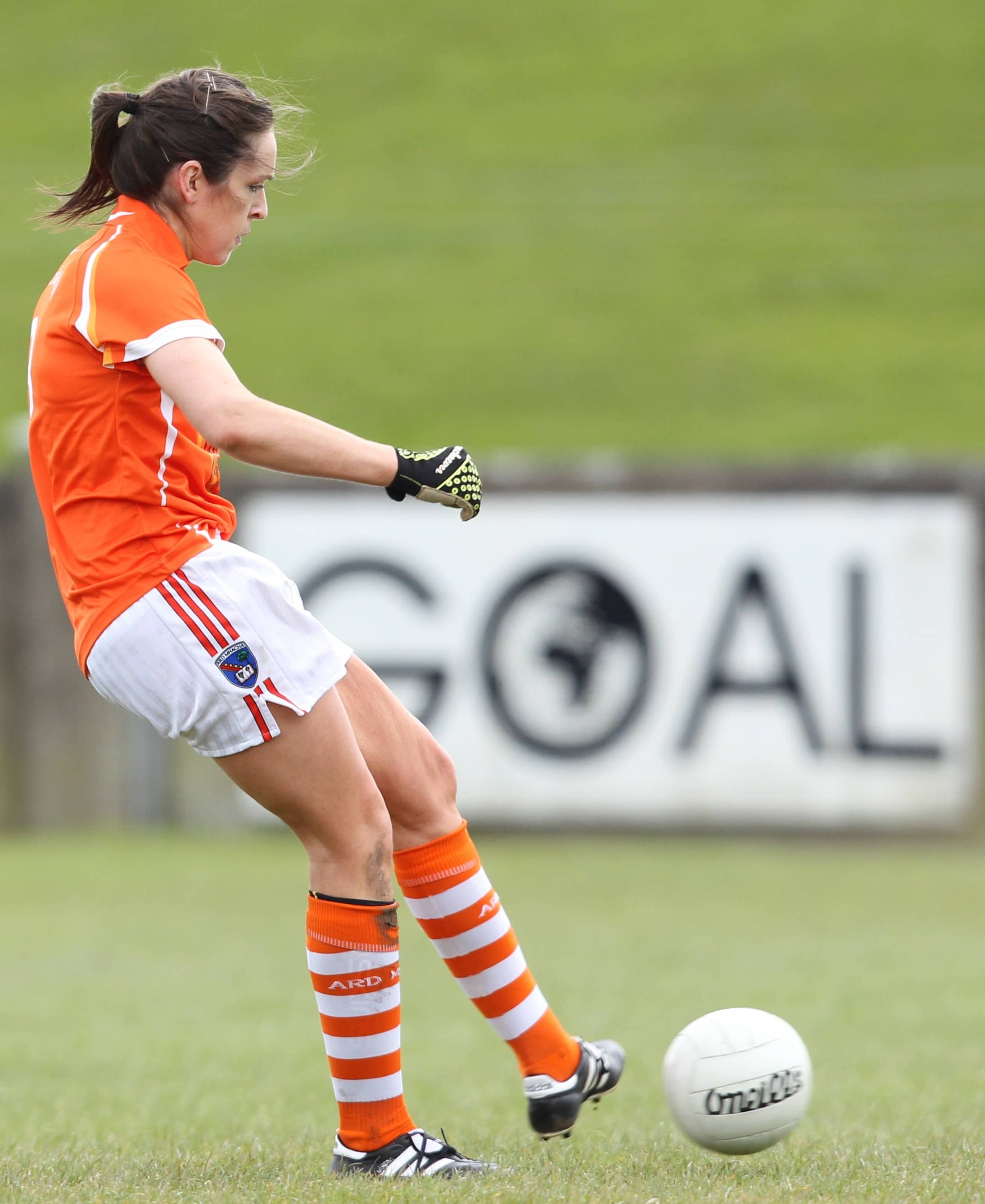 Armagh ladies will be aiming for their first National League success since 2005 when they take on near neighbours Down in Saturday’s Tesco HomeGrown Division Three final at Parnell Park in Dublin (12.15pm, live on TG4). Back then a young Caroline O’Hanlon was named Player of the Match after the narrow win over Donegal and, eight years on, the current Orchard captain is still pulling the strings in the Armagh midfield with two All Star awards under her belt.

The other survivor from the starting team in Armagh’s only previous appearance in a league decider is the versatile Sinead McCleary of Clann Eireann, who has graduated from schoolgirl centre half back last time to recently converted full forward this weekend!

She has big boots to fill in that particular role for the woman who wore No 14 that day, the now retired Aileen Matthews, kicked five points in the second half to earn Armagh a one-point victory.

However being entrusted with responsibility in a league final is nothing new for McCleary considering that last time, in spite of her tender age, she lined out at centre half back in place of captain Bronagh O’Donnell.

O’Donnell and her twin Alma didn’t start the match having only recently returned from a trip to Australia but both were introduced and were central to an Orchard comeback from five points down at half-time.

With Down being this weekend’s opponents, it is hopefully a lucky omen that it was Ulster opposition Armagh beat last time – and, coincidentally, the 2005 final was at St Loman’s Park in Mullingar where O’Hanlon’s side defeated Tipperary in last month’s semi-final.

Apart from the experienced pair of O’Hanlon and McCleary – incidentally Armagh’s joint top scorers in the current campaign – it is, almost inevitably given the passage of time, all change elsewhere for Armagh in personnel terms though there are plenty of parallels with the 2005 team.

Like its predecessor, the current team also features a medical student from the Carrickcruppen club in midfield and a talented Lurgan schoolgirl, with Caitlin Malone and Niamh Henderson the modern versions of O’Hanlon and McCleary in that regard.

Back in the mid-noughties, Armagh won two national trophies in the space of several months as they went on to claim the All Ireland Junior title later in 2005, with rising star O’Hanlon again getting Player of the Match for the final against Sligo.

That sense of double whammy history could repeat itself in reverse as Armagh are going for a second victory in a Dublin final in quick succession having beaten Waterford in Croke Park last October to be crowned All Ireland Intermediate champions.

However O’Hanlon insists she doesn’t do nostalgia, rightly noting that neither history nor omens put points on the scoreboard or stop the opposition playing.  Likewise, past triumphs don’t satisfy present hunger.

Rather than taking a sentimental trip down memory lane, her full focus is on Saturday’s showdown, with historic silverware won being of little immediate interest compared to the trophy and promotion prize on offer at Parnell Park. Armagh’s Sharon Reel and Down captain Sinead Fegan at the pre-finals press launch in Dublin on Tuesday.

“Winning Division Three unbeaten has been our aspiration since the turn of the year and now we’re in a position to make that happen by winning one more match,” says the Daisy Hill Hospital doctor.

“When we won the All Ireland Intermediate final last October, we were clear about wanting it to be a stepping stone, a springboard for further success, rather than an end in itself.  Gaining promotion became our next target.

“Having had to salvage a draw against them in our opening league game, we certainly won’t be underestimating Down and everyone’s expecting a tough game.

“We will definitely need to be at our best on the day, but our young players proved in Croke Park last autumn – and indeed in the recent semi-final – that they relish the challenge of big games and pressure situations rather than hiding or being daunted by them.

“Management and players have all worked hard over the past four months to give ourselves this opportunity of promotion and a trophy, so we will give everything to make that chance count and make our supporters proud,” she promises.

Caroline and the team would appreciate the support of all Armagh gaels who can make the relatively short trip to Parnell Park for Finals Day, which also features Galway versus Kerry in the Division Two decider (2pm) before the top tier battle between Cork and Mayo (3.45pm).  Under 16s will be admitted free.