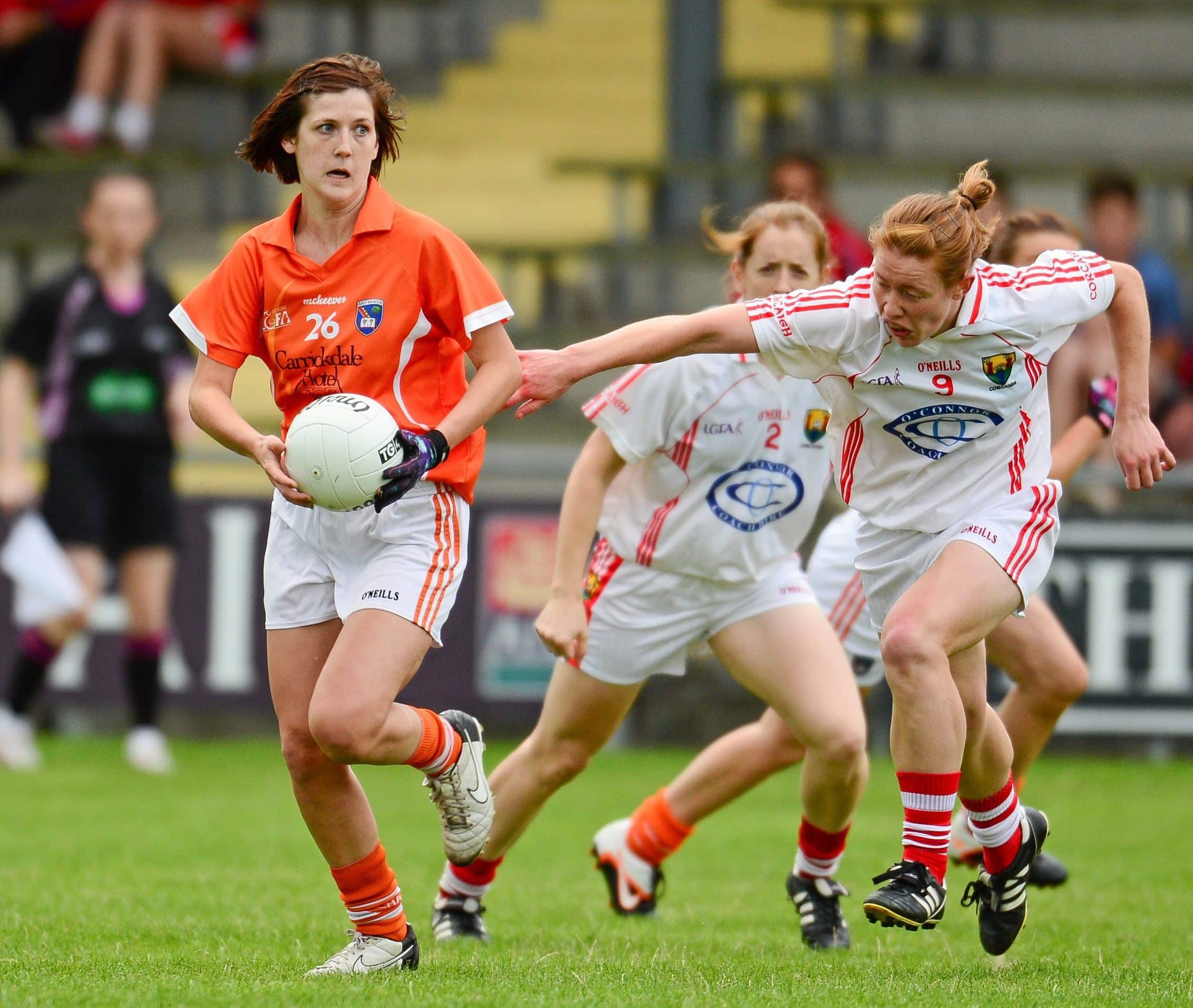 by Richard Bullick in Birr
ORCHARD defender Caoimhe Morgan has vowed that her heroic team will stick together to win an All Ireland after Armagh came within a whisker of toppling champions Cork on Saturday evening.
Although James Daly’s side suffered the heartbreak of a third one-point defeat in three big games this season, the manager and his players left Birr as Armagh heroes after a magnificent comeback in the second half.
Trailing by seven points at the interval, rank outsiders Armagh threw caution to the wind with an inspired performance that had the must successful side in ladies football history reeling.
They tore into their illustrious opponents, All Ireland champions in seven of the past eight years, with impressive purpose and goals in the first five minutes by Kelly Mallon and Caroline O’Hanlon brought the dream alive.
Those strikes transformed the scoreboard and injected absolute belief into a revitalised Armagh side which combined ferocious commitment with some exceptionally fine football, underpinned by fantastic fitness levels.
Displaying pride and passion to warm every Orchard heart, the Armagh players repeatedly put their bodies on the line and dug deep in an unforgettably brave bid to pull off their greatest ever result.
It was role reversal from the first half when Cork repeatedly took advantage of faltering Armagh attacks to go down the other end and score – now the champions were being force fed a taste of their own medicine.
Although she had a few prominent moments, the half-time introduction of former Cork captain Juliet Murphy following her recent return from retirement had little effect on an Armagh team with the bit between their teeth.
“We were a bit behind at half-time alright but knew we had the measure of them,” reflected Morgan, who typically fought ferociously in the Orchard cause alongside sisters Sarah and Niamh Marley on an evening when there were many Armagh heroes.
Armagh’s mighty effort brought back memories of the 2006 All Ireland final when the unfancied upstarts also came within a point of upsetting a seemingly invincible Cork team.
Special mention must go to Armagh’s goal-scorer from that 2006 final, Mairead Tennyson, who recovered from fainting at half-time to perform heroics way out of position in the full back line.
Harshly sinbinned in Croke Park that day, Morgan would be entitled to bitterly reflect on the referee’s failure on Saturday to dish out a couple of yellow cards to Cork, one for a disgraceful challenge on her younger sibling Niamh.
But, be it in gaelic, soccer or rugby, decisions don’t tend to go the way of the smaller sides and Armagh again got little change out of the officials as they fought firstly to stem the tide and then make history happen.
Buoyed by the goals, Armagh’s response was a snapshot of their inspired, rounded display as Morgan did brilliantly in defence and fed Caitlin Malone, who freed Fionnuala McKenna, who linked with supersub Siobhan Mackle (pictured).
Dancing delightfully in her white boots, the magical Mackle capped her transfixing run with an inspiring point and, although Cork replied almost immediately, Marian McGuinness added another after an uplifting intervention by Niamh Marley.
Cork scored again but Sinead McCleary landed a free and O’Hanlon levelled matters with a point entering the final quarter of what was now a pulsating game for the live television audience.
Armagh actually went in front entering the final 10 minutes of stop-clock time when another mesmerising run by Mackle paved the way for fellow teenager McKenna’s second point, though Cork quickly equalised with a free.
The champions eased the pressure with the next two scores but Armagh were far from finished and the least they deserved for waves of attack was the lovely point by O’Hanlon which brought her team to within one.
Unfortunately Armagh’s greatest ever female footballer somehow thought there was still two in it and, when her team won a potentially equalising – though difficult – free with 20 seconds left to the hooter, the double All Star dropped it in rather than going for the posts and the Orchard chance had gone.
Nobody blamed an understandably distraught O’Hanlon for an aberration which will haunt her, an inexplicably cruel twist she didn’t deserve after another wonderful display as Armagh’s taliswoman.
For the team too, yet another one-point defeat was tough to take after losing not only that previous Cork clash but this year’s NFL Division Three decider and Ulster Championship semi-final by the minimum margin.
“We’re sick of this heartbreak but Armagh have shown we’re right back to where we were a few years ago and will fear no-one now.  We can really raise our game against the top teams and nothing is beyond us,” insists Morgan.
“This season is over but our All Ireland dream is alive again and every girl in that changing room wants to stick around because they believe we can make it happen.  It’s a totally positive picture and the only way we can react to this latest near miss is by pushing on for fresh success.”
ARMAGH: K Daly; L Kenny, C Morgan, S Marley; S Reel, N Marley, N Henderson; S McCleary (0-1, 1f), C O’Hanlon (1-3); M McGuinness (0-1), F McKenna (0-2), M Tennyson; C Malone, K Mallon (1-1), M McAlinden.  Subs – S Mackle (0-1) for Kenny (28 mins), C O’Hare for Mallon (57), A Hughes for McGuinness (61).