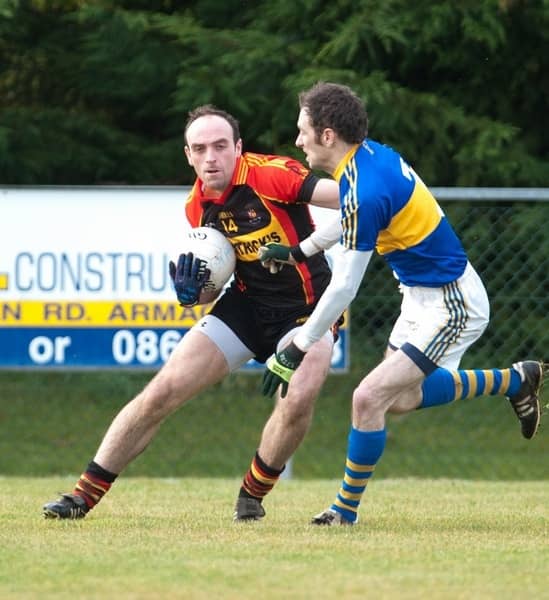 After a lengthy break from action, the Cullyhanna senior team were unable to end their current poor run of results as they slipped to another defeat at home to Maghery last Sunday afternoon.
The match opened with a relatively scoreless spell as it took ten minutes for either side to trouble the umpires as a fine point from Robbie Tasker initiated the scoring.
A minute later, the advantage was doubled as Barry McConville fisted a ball clear from midfield. Eugene Casey reacted to grasp possession before transferring to the onrushing Gareth Mackin who kicked a good point. Mackin added to his tally 14 minutes in with an excellent point from distance.
Maghery registered their first  point 20 minutes into the game and it took a fine save by Cullyhanna netminder Conor O’Neill and two subsequent defensive blocks to prevent a goal from the Loughshore men.
Robbie Tasker restored the 3 point advantage soon after, kicking a fantastic point from all of 45 metres while under the severest pressure. Tasker was on the scoreboard again 6 minutes from the break, profiting from a Ciarán McKeever pass to kick a fine point. An excellent point from Eugene Casey was Cullyhanna’s final score of the half with Maghery kicking a second point to trail by 0-2 to 0-6 at half-time.
Although Cullyhanna had enjoyed the assistance of a substantial breeze, a four point half-time advantage seemed a useful lead.
However it was to last only a mere two minutes of the second period as a hopeful Maghery ball forward was fisted to the net before an away point drew matters level. A brace of points 5 and 9 minutes into the half gave Maghery the advantage.
This 6 point swing within 9 minutes seemed a hammer blow for the Cullyhanna lads though to their credit they responded well as Eugene Casey led the fightback with a fine individual run and point. A glorious Cullyhanna goal chance was smartly saved before Maghery kicked a point 12 minutes into the half.
Eugene Casey responded for St Pat’s with a fine point from a difficult angle but Maghery kicked a minor score of their own to stay 2 in front. Cullyhanna retained every chance heading into the final stages though a tendency towards  wayward passes was always a concern. Three minutes from time, Barry McConville released Eugene Casey who reduced the deficit to the minimum with a point.
Unfortunately that was to be as close as Cullyhanna were to get as Maghery tagged on another score to secure victory by a two point margin.
This was a match that could have gone either way with the early stages of the second half being the crucial period in which Maghery secured their victory. Eugene Casey and Robbie Tasker exhibited some fine score taking while Gary McCooey was generally assured.
Ciarán McKeever, Barry McConville and Mal Mackin all had strong games around the middle. A quick return to winning ways will be sought next week at Granemore.
Starting XV: Conor O’Neill; Kieran McCooey, Stephen Reel, Micky Murray; Gary McCooey, Sean Connell, Paudie McCreesh; Barry McConville, Eugene Casey (0-4), Gareth Mackin (0-2), Robbie Tasker (0-3), Aidan Nugent, Niall McShane Subs Used: Ciarán McKeever, Connor Nugent, Peter McKeever
Match report courtesy of St Pat’s.