Ladies asking Armagh fans to ‘get there early’ 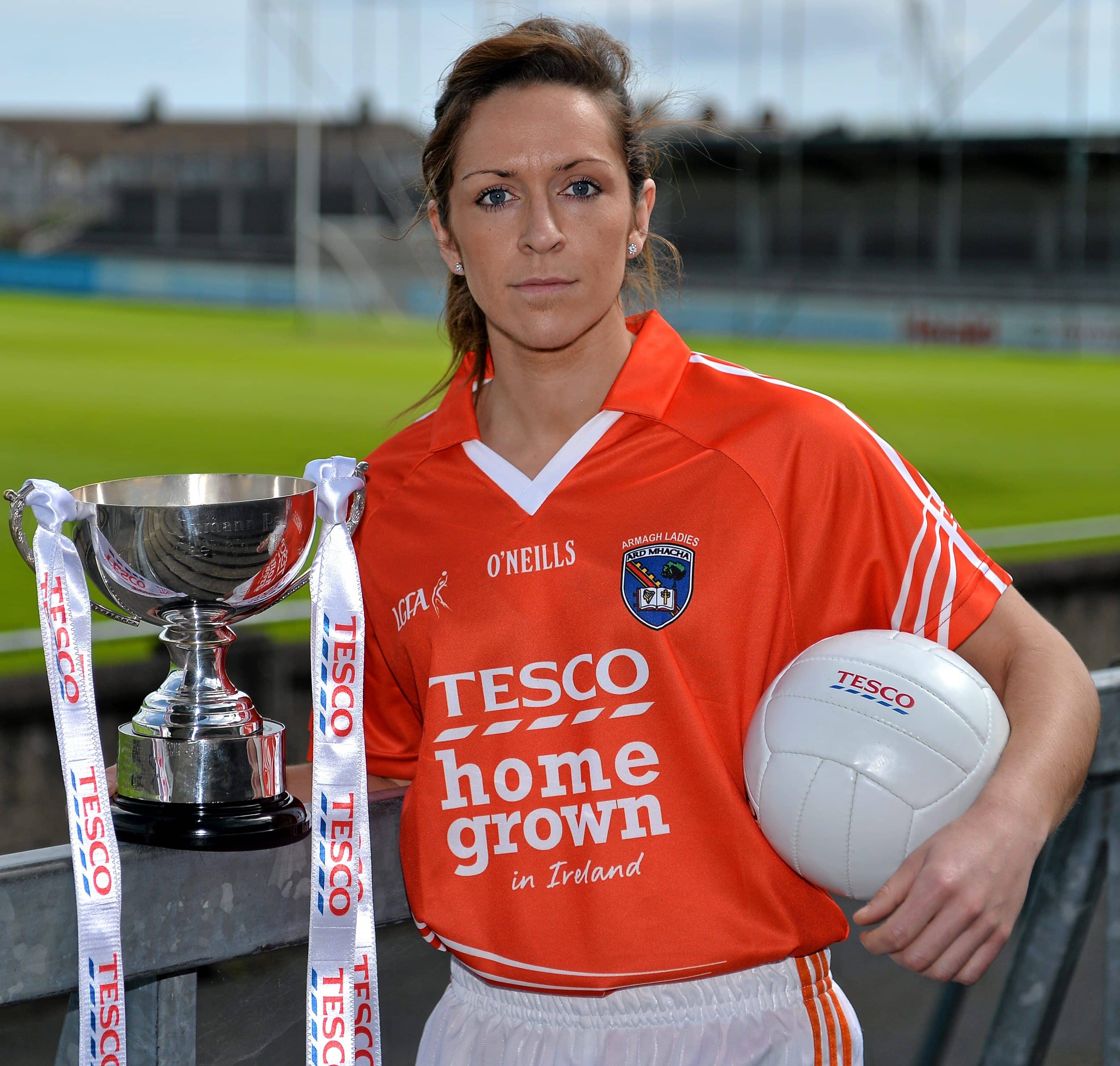 Armagh’s greats are backing calls for the Orchard faithful to turn out in time to support the county’s ladies side in the opening game of Sunday’s double bill at the Athletic Grounds.

Armagh ladies are launching a ‘Get There Early’ campaign encouraging Orchard supporters to take in both matches and help maximise the benefits for them of having home advantage.

In 2010 they beat Tyrone in a curtain-raiser at Breffni Park en route to their last Ulster final appearance but this is their first time to play a Senior Championship match at Armagh headquarters and it is a prospect the players are really relishing.

“The Athletic Grounds is a special place for anyone associated with Armagh gaelic and playing there should hopefully prove an inspiring privilege,” says renowned Orchard defender Caoimhe Morgan, who captained the team to that stirring victory four years ago.

Current captain Caroline O’Hanlon’s (pictured) superb personal performance was key to that triumph and both these wonderful servants of the Orchard cause will be at the heart of Armagh’s efforts this weekend.

Between them the pair have three All Stars and nearly three decades of service for the county team and richly deserve this special stage to perform in front of the wider Armagh faithful who are being encouraged to take this golden opportunity to catch the ladies in action.

Fresh from Northern Ireland’s devastating failure last weekend to qualify for next year’s Netball World Cup in Australia, O’Hanlon will be particularly buoyed by the timely message of support received from her sporting hero, ex-Orchard captain Paul McGrane.

“We have some exceptional ladies footballers in the likes of Caroline O’Hanlon and Caoimhe Morgan.  I know how dedicated these girls are and that they wear the Armagh jersey with the same pride I did,” he says.

“They are great role models for any aspiring footballers, boys or girls, are a great credit to our county and well worthy of support.  We’ll should all be right behind them on Sunday.”

As well as receiving the backing of former Orchard heroes Ger Houlahan, who has pledged to attend the full ladies game, Jarlath Burns and Oisin McConville, the Get There Early campaign has been boosted by senior statesman Aaron Kernan showing solidarity on behalf of the current team.

“It’s great that the ladies side will be playing in the Athletic Grounds the same day as ourselves.  We’re both playing the teams that beat us last year so it’s good having home advantage as we seek to turn the tables this time,” says the Crossmaglen ace.

“It would be a big boost for us coming afterwards if the girls get the afternoon off to a positive start and I’ve no doubt that seeing an Armagh team beating Tyrone would get the crowd going.

“Hopefully the crowds come out in force and get behind both our teams and really make the Athletic Grounds a special fortress for the Armagh football family this Sunday.  I’d like to wish Caroline and the girls all the best for their game.”

Those good wishes are reciprocated by O’Hanlon, who responds: “We’re all big fans of the men’s team and will look forward to watching their game afterwards, which is another benefit of playing at the same venue.

“Hopefully we can get our own job done first and after that we’ll be cheering on the boys against Cavan like everyone else.  Two wins would make it the perfect afternoon for the Armagh football family.

“The girls are buoyed by the messages of support received from these household names who are held in such high esteem and will appreciate every Armagh football fan who can come early on Sunday and get behind us.  We’ll certainly try our best to do people proud and deliver.

“A lot of our team grew up watching the epic encounters between the Armagh men and Tyrone and the rivalry between the counties has become just as intense in ladies football during my career.

“For a few years there we weren’t competitive enough, dropping down the divisions in the National League and falling out of the Senior Championship, but now we’re on the up again and this should be a cracking contest.

“They’ve kept their place in Division One this spring but we’ve finally secured promotion from Division Three at the third attempt and there’s a positive vibe in the camp.

“We played Tyrone in the Ulster semi-final last year and only lost by a point even though with hindsight the absolute belief maybe wasn’t there then.  We’d chances near the end but couldn’t take them.

“After that we took All Ireland champions Cork right to the wire in the qualifiers and although another one-pointer was hard to take, the recent NFL final suggests we’ve cracked how to close out tight games which was a problem last year.

“Naturally this will be a significant step-up from playing Division Three and we’re well aware that Tyrone have quality players but there’s no way we’ll fear them or have an inferiority complex.

“Playing in the Athletic Grounds is a big boost for us and we’re determined to do people proud.  The last time we reached an Ulster final we beat Tyrone in a curtain-raiser along the way so that has good memories.

“We can’t count on the Athletic Grounds doing it for us but it can undoubtedly become a significant factor in our favour provided we get everything else right in terms of our preparation and performance.

“Unlike the claustrophobic pressure on us as overwhelming favourites in the league final, this time Tyrone will carry the burden of expectation and for us it’s all about opportunity.  We’re determined to grasp it,” she insists.