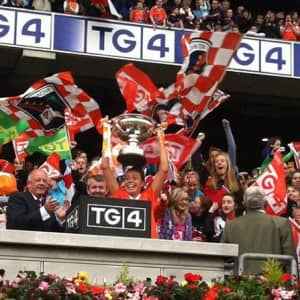 ARMAGH Ladies are celebrating tonight after regaining senior status with a comfortable seven-point victory over Waterford in the TG4 All-Ireland intermediate football final at Croke Park.

At half-time, Armagh led by 1-5 to 1-1, but they could have been much further ahead, having registered no fewer than 13 wides in the opening half.

Waterford opened the scoring through captain Michelle McGrath with just 18 seconds on the clock, but, after hitting the front, Armagh were never caught. With 10 minutes gone Caroline O’Hanlon’s free struck the Waterford upright, but Armagh full-forward Shauna O’Hagan was on hand to pick up the pieces from close range.

That goal handed the Ulster champions a 1-0 to 0-1 lead, but Waterford netted themselves in the 12th minute when Hannah Landers took a pass from Linda Wall to finish superbly at the Hill 16 end.

Armagh fully deserved their four-point half-time advantage, as Waterford struggled to make headway in the opposition half.

Wall cut the gap back to three points with the opening score of the second half but Armagh were always in control.

With 20 minutes left, Armagh were 1-10 to 0-3 clear, thanks in the main to dominance in all sectors of the pitch.

In the 41st minute, Ciara Lennon went close to scoring a second Armagh goal, but her shot flew inches wide.

At the other end, meanwhile, Armagh goalkeeper Catherine McAlinden was in sparkling form.She was brilliantly protected by a rock-solid Armagh full-back line for most of the game but, when called upon, the Clann Éireann custodian came up with the goods.

A foul on Linda Wall by Sinead McCleary handed Waterford the chance to get back into the game, as referee Pat Kehoe awarded a penalty to the Déise.

But Michelle Ryan’s poorly-struck effort in the 52nd minute was comfortably saved by McAlinden, who then produced a fine save from Ryan’s blistering drive a minute later.

Armagh went close to a second goal soon after, as Kelly Mallon’s shot across the face of goal was narrowly missed by the inrushing Mags McAlinden.