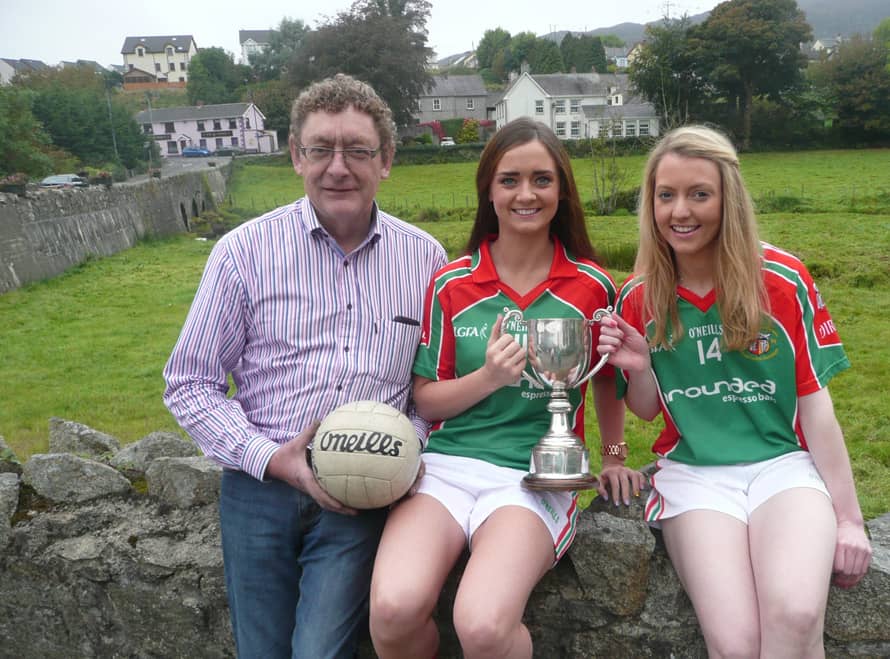 Amy Mulholland acknowledges that her Armagh Junior champions are already in bonus territory but the Forkhill captain has got greedy for further success as she contemplates the club’s first provincial campaign.

Forkhill travel to Loughinsland on Saturday (2pm) for their Ulster Junior Championship quarter-final with little knowledge of the opposition but a positive sense of adventure and still on a high following their deserved victory over Mullaghbawn in a replay. “Everything has just been buzzing and even on a night out I’ve had people mentioning it,” says the ebullient Mulholland of Forkhill’s first trophy triumph after the best part of a decade in existence.

“I was asked on the pitch straight after the win what it meant to the club but it’s only sinking in now how much we appreciate it. We’re a small club and have even struggled to field on occasions but we’ve kept going and those hard times make this success all the sweeter.

“This is a young side with only a few girls left from the early days but everybody who has played down the years can feel they contributed to this.”
Still only 21, the mature Mulholland – who works for the PKF-FPM consultancy in Newry – has been there since the club’s second season, having gone straight into adult football after playing with the boys’ side up to the age of 12.

“The likes of myself and (co-captain) Aoife Treanor have been there down through the years but this season has been the best in terms of attendance at training and the commitment has been rewarded.

“Our manager Misty (Quinn) probably deserves more credit than us players, he’s just absolutely brilliant and we owe him so much. He organises everything and nobody could ask for anyone better at a club.”

The celebrations were memorable but, with a long winter ahead to keep partying, Mulholland and her team would like to stretch out this special summer – “some years we’ve finished by the start of August which is horrible” – a little longer.

“It’s interesting how things evolve. After the county final I suppose we started off thinking that we’d got what we wanted from this season and that anything from here would be a bonus,” she reflects.

“But now that the final is well behind us, we’re really looking forward again. We’ve had a taste of success and we want to keep things going. It’s a step into the unknown but I don’t think we’ll lack confidence.

“The fact we’re on the road makes it more of an adventure and after the fantastic turnout we got for the two games against Mullaghbawn I’m sure some we’ll have some support with us next Saturday in Loughinisland.

“To be honest we don’t know much about them but that will be the same for both teams so it should hopefully be a good game. We’re delighted to have the opportunity to experience a provincial campaign as the icing on the cake after winning our couny final.”

That is an acknowledgement of Forkhill having to get special dispensation from the Ulster Council to take part in the provincial competition – the replay against Mullagbawn was after the official cut-off date for county finals as a result of the original game being scheduled for deadline day.

Having drawn 1-12 each first time around, Forkhill won the replay 2-10 to 1-7 with lively forward Mulholland kicking four points and the promising Sheridan sisters, Megan and Lauren, sharing the Player of the Match award.

Loughinisland haven’t happy memories of facing Armagh opposition – a decade ago they were thrashed 7-19 to 0-2 in the Ulster Senior Club Championship by Crossmaglen, who had scored six goals before their opponents registered their first point!

The O’Donnell twins got two goals between them with two apiece from Armagh forwards Sharon Duncan and Patricia McAvoy. The Loughinisland side then and now features Gemma Gibney, who plays alongside Armagh captain Caroline O’Hanlon for the Northern Ireland netball team and won Player of the Match in the recent Down Junior final. That match has however little relevance to the present scenario with Loughinisland having dropped down to the third tier and Forkhill being an emerging young team in contrast to that star-studded Cross side.

Forkhill have no senior county players but a number of their team have represented Armagh at age-group level in recent seasons and, inspired by the Orchard heroics this year, Mulholland has ambitions to pull on the orange jersey in future.

“I’d Armagh aspirations this season but was coming out of last winter with a bad back so it didn’t work out. I’m hoping to go forward for the trials this time,” she says, confirming that the tendonitis which caused her to play the county final with a heavily strapped knee has greatly eased since then.