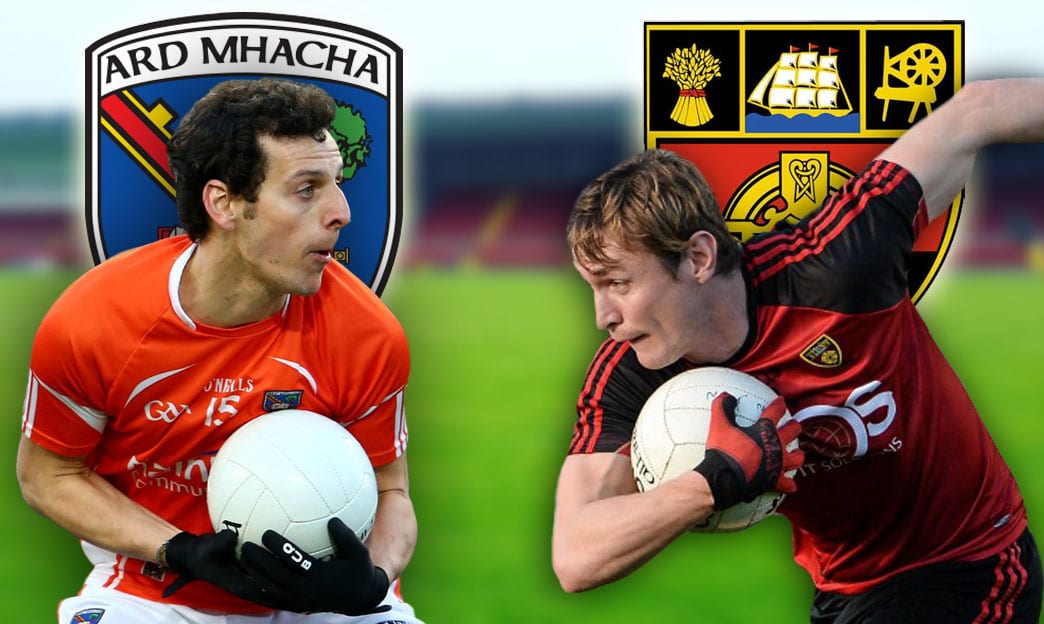 Armagh suffered their third successive Ulster Championship first round exit after defeat to Down in Newry on Sunday afternoon.

Despite leading at half-time, it was the solitary three points after the interval which consigned Kieran McGeeney’s men to another conspicuous early Ulster exit.

A shocking second half performance was contrary to the splendid opening 35 minutes from both teams; unfortunately for Armagh, that attacking flair deserted them as Down sailed into the semi-final to face either Cavan or Monaghan.

Armagh failed to turn up in the opening ten minutes of the game, which allowed down to race into a commanding four-point lead with Caolan Mooney opening the scoring with a fisted point, before Ryan Johnston made the most of a mix-up in the Orchard defence to double the lead.

Goalkeeper Michael Cunningham pointed his first of the day from a free out on the left before Jerome Johnston did likewise moments later from the opposite side.

It was the 13th minute before the visitors registered but it was the tonic they needed as a high, looping Oisin O’Neill free dropped short and into the arms of Clarke who laid off to Mark Shields, before the Whitecross man hammered past Cunningham.

Darragh O’Hanlon responded for Down with a free before half-back Aaron McKay had a glorious chance for a second Armagh gaol, only for his rasping effort to go sailing over the bar. It was a glorious sideline from Hughes was arrowed his pass diagonally into the onrushing McKay.

Harrison made amends moments after with a nimble jink and right-footed point on 20 minutes.

But, as Armagh have proven in the McGeeney era, it’s goals they want and Andrew Murnin duly obliged with a superbly taken effort after outstanding build-up play from Clarke, who was impressive throughout the first half – a man who had been out of championship action for two years prior to today.

As McGeeney watched on from the clubhouse behind the goal, his team began to take command of the tie with Forker landing his opening gambit before Hughes, all the way from corner-back added another.

Not to be outdone, the hosts responded well with O’Hanlon and Harrison reducing the deficit to one with two quick-fire points.

Shay Millar levelled the game up in the 33rd minute before Murnin missed a magnificent chance to net his second goal of the game, whacking the outside of the post with a deft finish; again Clarke instrumental in the build-up.

With just seconds of the half remaining, Stephen Sheridan hit a long, and rather hopeful, shot on goal, only to see it sneak between the posts to give Armagh the slenderest of leads going into the break.

But it was a completely different story after the interval with Down taking over.

O’Hanlon levelled from a free after Blaine Hughes messed up, over-carrying out from his area.

O’Hanlon then added another to give the hosts the lead before Mooney, with a huge effort from the right side, and Conor McGinn increased the lead.

It wasn’t until the 50th minute that Armagh opened their second half account and they did it through substitute Anto Duffy.

It would be another 24 minutes before Armagh would register again.

Darren O’Hagan scored a crucial point after 13 minutes of stalemate where both teams failed to bother the umpires and their flags.

Gavin McParland lofted over a free four minutes into injury time but substitute David McKibbon put three between the sides a minute later.

A late skirmish on the 13-yard line gave Armagh one final chance to go for goal but Clarke’s effort was too high.

Armagh go into the qualifiers as Down march on in Ulster.