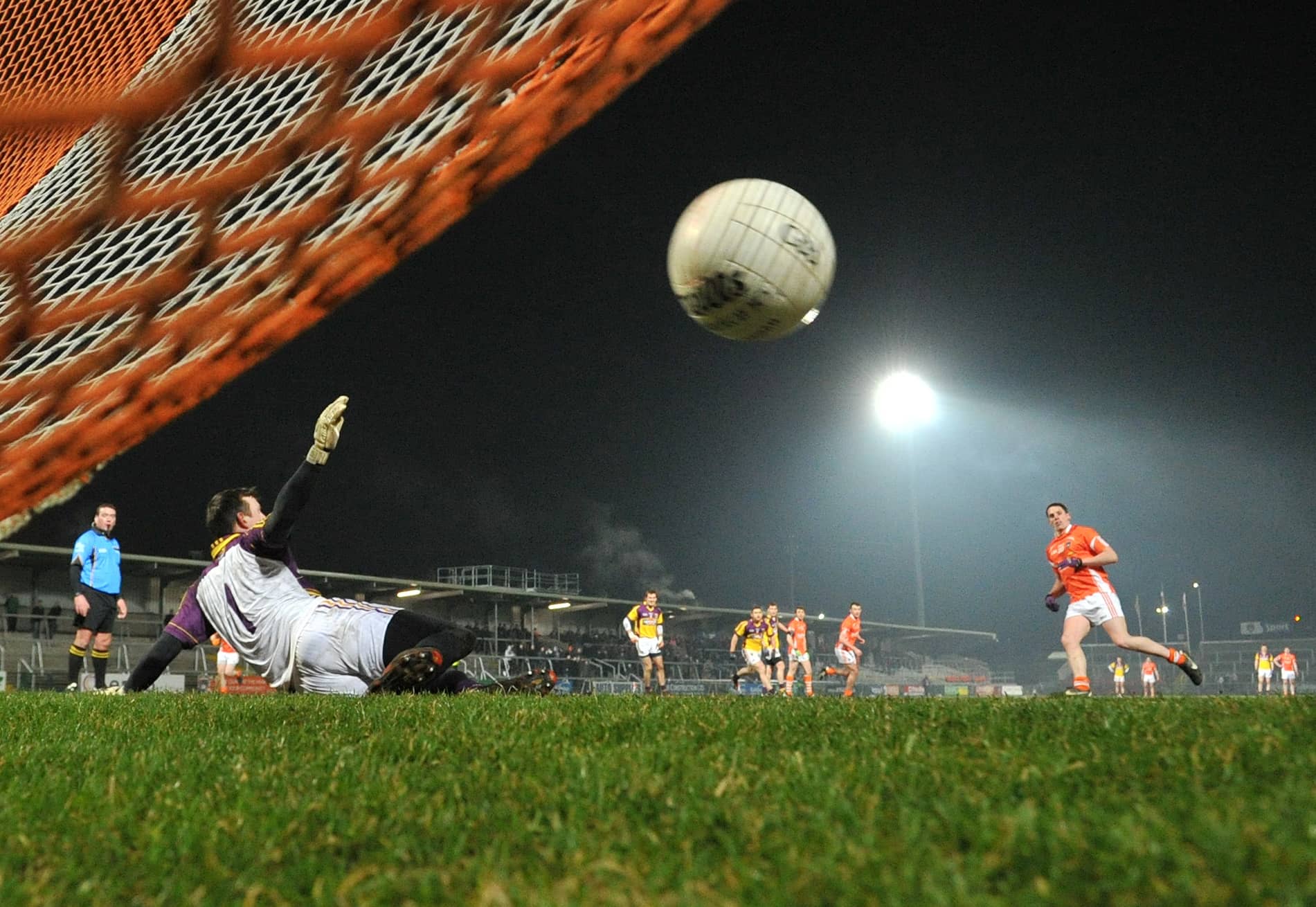 ARMAGH were left to rue a disastrous start as they claimed a thrilling 3-8 to 3-8 National Football League draw with Wexford on Saturday night, despite a Gavin McParland hat-trick.

Gavin McParland completes a magnificent hat-trick from the penalty spot in Armagh’s dramatic draw at the Athletic Grounds on Saturday evening. Photo by Conor Greenan

The home side conceded three goals in the opening 20 minutes and this proved too much of an obstacle to overcome as they picked up their first point of the league campaign.

After trailing 3-3 to 1-1 at the break, a stunning Armagh comeback gave the home support hope of snatching victory from the jaws of defeat but they ultimately fell just short.

Sluggish starts have been a feature of Armagh’s recent games and Wexford took full advantage as Paddy Byrne, Shane Roche and a Redmond Barry penalty all found the back of Philip McEvoy’s net before substitute Gavin McParland hit back with a goal of his own.

McParland, James Lavery and Brendan Donaghy were brought on by a ruthless Paul Grimley before the break and the Ballymacnab man staked his claim for a starting spot with a superb individual performance.

Stefan Campbell slots over the last-minute equalising point to earn Armagh a draw against Wexford in their NFL Div 2 meeting at the Athletic Grounds on Saturday evening. Picture: Conor Greenan

Both sides exchanged a number of points after the restart, including a brace of points from the in-form Stefan Forker, before goal-specialist McParland found the top corner once more after 56 minutes to give his side hope.

Improved second-half showings are also a familiar sight for Armagh fans and the trend was continued as the home side sensed they could snatch something from the game.

All-Ireland Minor winner McParland completed his hat-trick soon after, dispatching a penalty to cut the deficit to three points as Wexford led 3-8 to 3-5 with ten minutes remaining.

Barry Loughran and Forker narrowed the gap to a solitary point before Rory Quinlivan was sent to the stands for the visitors for a second yellow card.

And although a late Armagh equaliser levelled matters for the first time in the game, Meath referee Joe Curley called time on the action as both sides had to share the spoils.

The stunning comeback was cause for cheer for the home side but there will be a sense of a point dropped rather than gained as Armagh’s young side continue their steep learning curve.

Gavin McParland scores his second goal en route to a hat-trick against Wexford in their NFL Div 2 meeting at the Athletic Grounds on Saturday evening. Picture: Conor Greenan