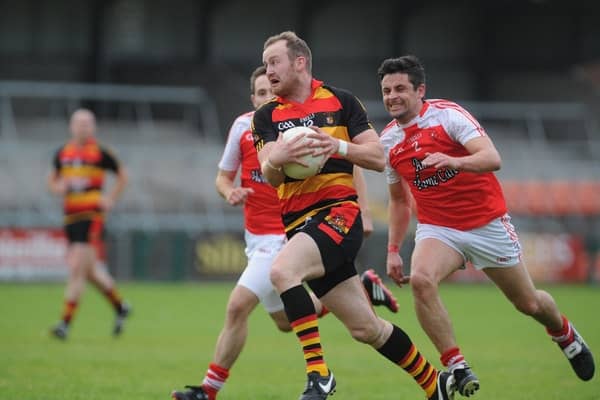 St. Patricks Cullyhanna overwhelmed Annaghmore last night (Friday) in the Senior Championship to put their name into the last eight of the competition.

The game started at a great pace, and Annaghmore’s Oisin Mac Iomhair got the first point of the game. The Annaghmore full forward continued where left off in his side’s first round victory over Shane O’Neills. St Patrick’s Cullyhanna vs Annaghmore in the Armagh Senior Football Championship at the Athletic Grounds. Photo by John Merry

Kieran Hoey soon levelled up after his side had hit three consecutive wides. Mac Iomhair restored the lead when he chose the sensible option to put the ball over the bar from close range eight minutes into the match.

Tony Donnelly helped Cullyhanna get into the swing of things with two points in two minutes. The first coming from a free kick, and the latter a close range point after Gareth Mackin turned the ball over in the attacking half.

Donnelly scored his third of the game soon afterwards with a point from the right wing. Annaghmore’s Ciaran Mac Iomhair who had a great start to the game notched one back with a delightful score from 30 yards.

The game was levelled on 17 minutes when Oisin Mac Iomhair was brought down on the left hand side and the county man comfortably converted the free. He then put Annaghmore in front again with his fourth score of the match.

A big moment arrived for Cullyhanna on the 23rd minute, Gary McCoey had a strike blocked down and the ball fell through to Kieran Hoey who had a bit of space in front of goal. Hoey popped his head up and took a short determined burst, then squeezed the ball under the crossbar to put last year’s finalists two points ahead.

The deficit was extended to three just before half time. Tony Donnelly gathered the ball almost 40 yards from goal and hit a fine thumping shot over the bar.

Cullyhanna came out in the second half in a confident manner, and Annaghmore appeared to be shaken by St Pat’s strong finish to the first half. Aidan Nugent punished Annaghmore’s two wides in the opening minutes of the half, the corner forward found space with a few fantastic deceitful jinks before striking over.

The game really began to fizzle out as Cullyhanna looked the sharper side all over the field, their lead stretched to six after points from Eugene Casey and Adrian Hoey.

Aiden Nugent put Cullyhanna seven points ahead with ten minutes to go in the match, and they never really looked like throwing away that lead. Annaghmore’s Michael McNeice grabbed a point one minute later but that would prove to be their final score of the match.

Points in the final minutes from midfield partners Pearse Casey and Barry McConville helped Cullyhanna secure a 1-12 to 0-07 victory.

It was a comfortable victory for St. Patrick’s in the end but they did have a few shaky moments. Annaghmore really pushed them in the first 20 minutes and their shooting accuracy wasn’t exactly top notch, but after they grabbed the goal it was pretty plain sailing from there. They’ll be happy to secure their place in the last eight but will be hoping for a big improvement.