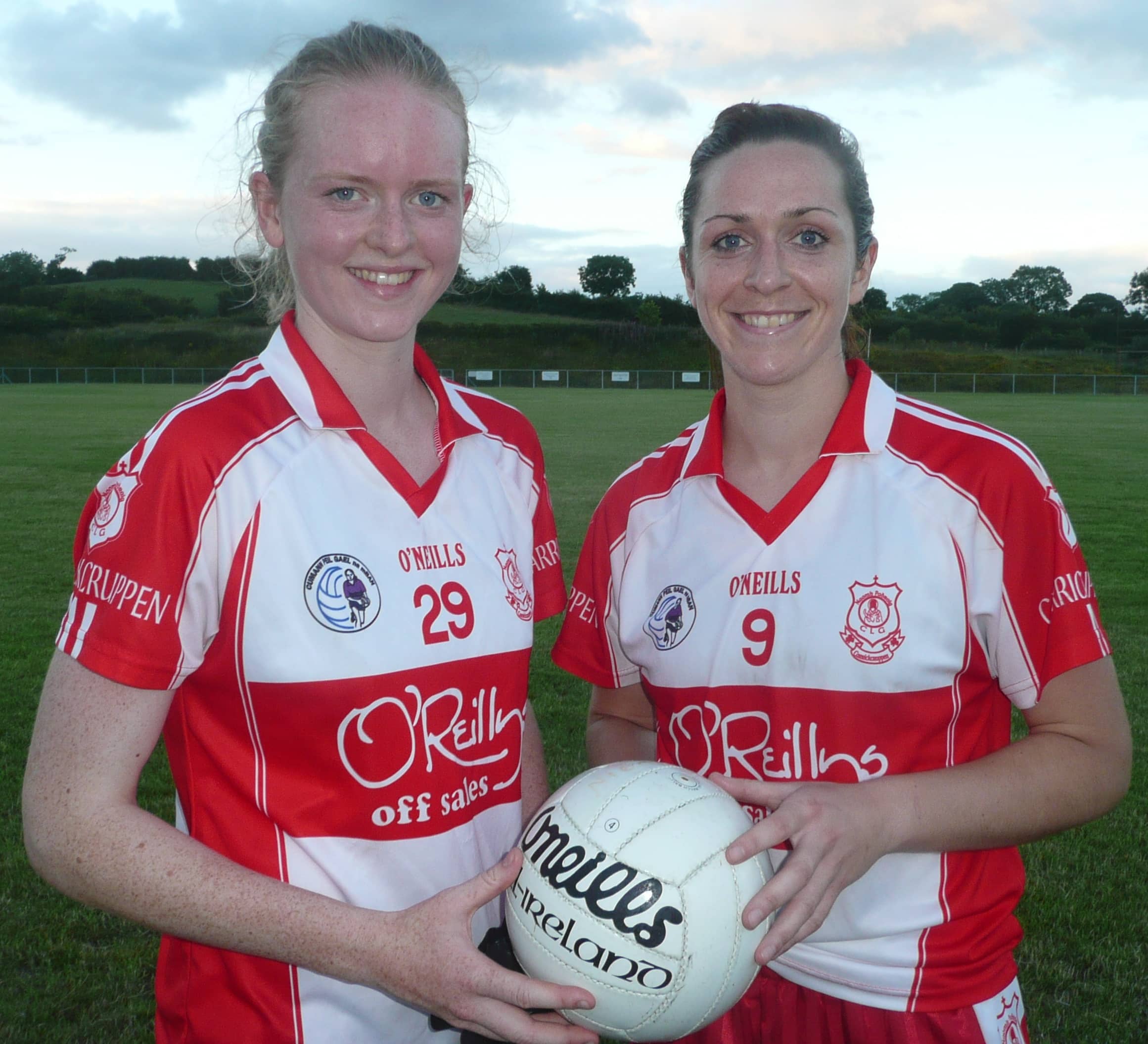 A rapidly improving young Harps side had come into the match as undoubted underdogs but with high hopes of an upset after running champions Clann Eireann close in a league game last week.

But double All Star O’Hanlon led the way with 2-3 as confident Cruppen weathered a first quarter storm to build an 11-point interval lead which they had extended to an emphatic margin of 20 by the end of the evening.

Harps had begun brightly but, having already scored half of her team’s first six points, O’Hanlon (pictured, right, with Armagh county colleague Caitlin Malone) hit the net on 21 minutes and from there Carrickcruppen never looked back, going on to establish a 2-11 to 1-3 advantage by the break.

The second goal, six minutes after O’Hanlon’s significant strike, came courtesy of another county player Caitlin Malone, who recorded Cruppen’s second best tally with 1-3 on a night they had seven scoreboard contributors.

Natasha Lennon took her haul to five points with the favourites’ first four scores of a second half in which Harps only added two more points to their account whereas Carrickcruppen registered an aggregate of 11, including O’Hanlon’s second goal.

Megan Cinnamond had two frees among her three points, all in the first half, while experienced former county player Caoimhe Murray also finished with three by rounding off the scoring.  Armagh’s Marian McGuinness also chipped in, while the opening point of the evening had come from Aoife McCullough.

For Harps, Armagh’s rising star Fionnuala McKenna did her best to inspire and she shared their scores with county colleagues Kelly Mallon, a recent recruit from Derrynoose, and goal-scorer Siobhan Feeney.

The other senior semi-final, scheduled for Saturday, is a repeat of last year’s decider and champions Clann Eireann are firm favourites to achieve a similar result against Dromintee, who like Carrickcruppen received a bye into the last four.

Although Dromintee had five players in Armagh’s All Ireland Intermediate title winning panel last year, star-studded Clann Eireann, who beat Killeavy in the last round, have far greater experience in their ranks even though former Armagh captain Meabh Moriarty has left for a year in Australia.

Armagh’s young goal-keeper Katie Daly could be busy, with the expected bombardment being good practice ahead of the following weekend’s daunting assignment against Cork.

The only Division Two side left in the Mackin’s Intermediate Championship, Grange, will be hoping to follow up on their impressive victory over Lissummon by upsetting Ballyhegan in what could loosely be branded a Loughgall derby.

Like Lissummon, Ballyhegan have a couple of county team defenders in Clodagh McCann and Danielle Morgan, but with the legendary Dervla Mallon commanding midfield and irrepressible Siobhan Mackle creating havoc up front, Grange are undoubtedly dangerous.

The other semi is an all-South Armagh affair with last season’s beaten finalists Crossmaglen meeting neighbours Silverbridge in a contest between two top flight teams.

It is a few years now since Crossmaglen ruled the roost at senior level and, without a single player in the current county panel, they will have their work cut out against an enthusiastic Silverbridge side who have regular representation in the Armagh match squad.

Forkhill face Shane O’Neills and, after their extra-time derby victory over Granemore, Keady are up against Dorsey Emmetts in the last four of the Junior competition, with neutral venues being used for all Championship semi-finals.