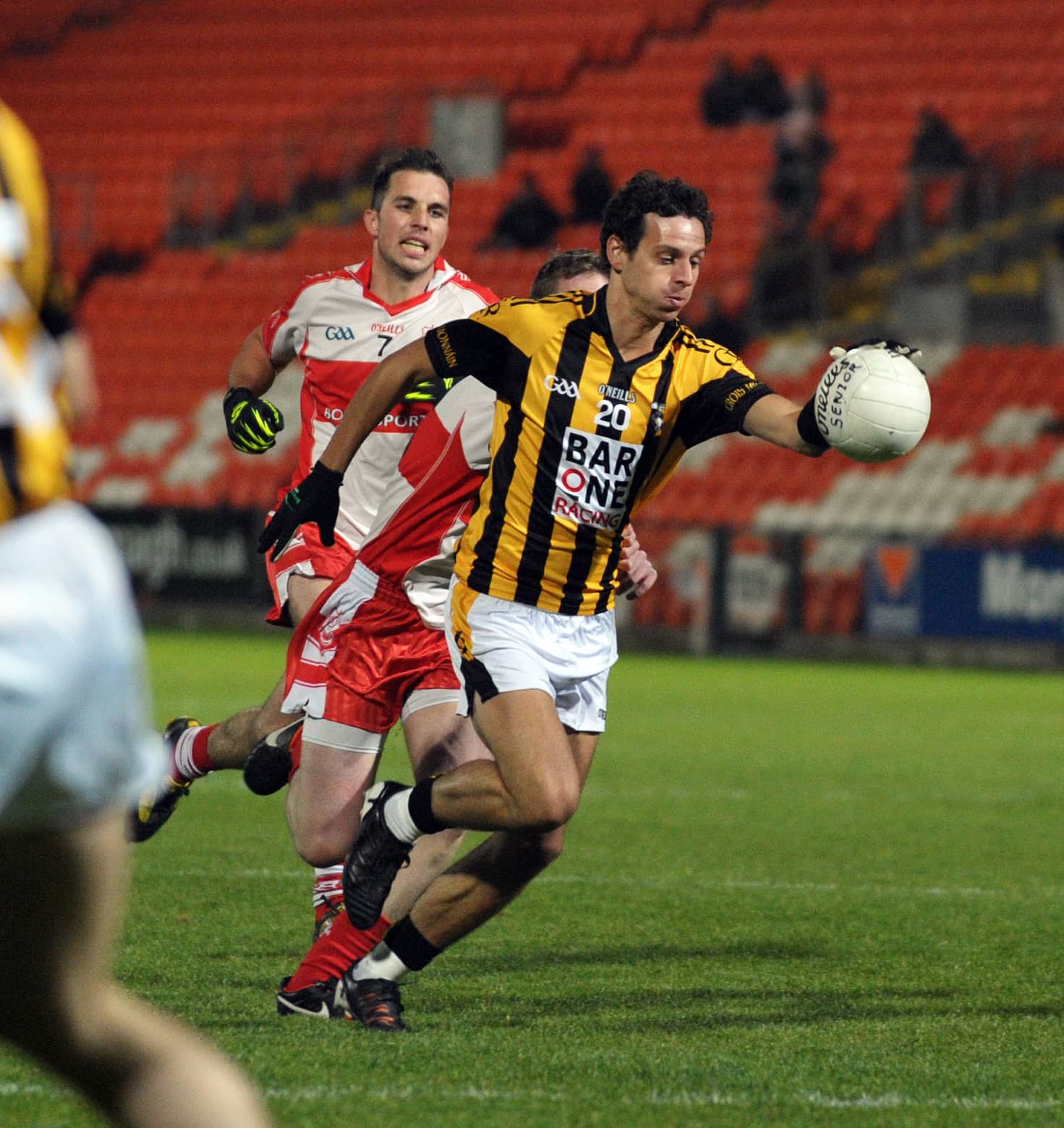 Crossmaglen Rangers eased their way into the Quarter Finals of the Senior Championship after defeating Carrickcruppen by 28 points in the Athletic Grounds on Sunday.

Crossmaglen got off to a great start, developing a seven point lead after 15 minutes.  The current champions simply never took their foot off the gas and ran Carrickcruppen ragged throughout.  John Murtagh was the main man for the winners, scoring an impressive tally of 2-05.  Jamie Clarke, who is back in the Cross squad after deciding against going travelling this year, came off the bench and scored 1-02 which helped Cross come out on top 3-24 to 0-05.

Callum Cumiskey got the opening point of the evening, scoring with his right foot, 30 yards from goal.  Murtagh grabbed their second shortly after when he collected his own misplaced fist pass in a bit of space on the right and put the ball over.

Declan Carville grabbed one back for the Camlough side with a close range free kick, but unfortunately this point couldn’t trigger a positive spell for the heavy underdogs.

Crossmaglen then got five consecutive scores in eight minutes through Tony Kernan, John Murtagh, Kyle Carragher and two from Aaron Kernan.  The damaging onslaught didn’t stop there, points from Carragher and Martin Aherne left Crossmaglen leading 0-09 to 0-01 after just 16 minutes.

The first goal for Crossmaglen came when Michael McNamee showed great strength in holding off Carrickcruppen’s tackling defenders, before unselfishly passing the ball across to Murtagh who tapped in.

Crossmaglen were soon leading by 14 points, John Murtagh made a great shimmying run and laid the ball off to Aherne who confidently slotted over to make 1-12 to 0-01 on the 22nd minute.

Their second goal arrived just two minutes later, Aherne and Murtagh switched roles when Aherne made the assist with a fist pass which fell to Murtagh who tucked the ball in under Blaine Hughes.

Paul Keenan scored Carrickcruppen’s second with a great point from the right wing.  In fairness to Keenan he never dropped his head throughout and put in great effort despite the ever growing margin.

When the half time whistle was blown Cross were leading 2-13 to 0-02.  Carrickcruppen were being outdone all over the field, and the scary thing was that the leaders were looking as motivated as ever.

Carrickcruppen got the opening point of the half through James Loughran, but points from county stars Kyle Carragher and Jamie Clarke who had just been introduced put the deficit to 18.

Tony Kernan almost grabbed a third goal when he burst through the Carrickcruppen defence but his goal bound shot was superbly saved by Hughes.

Jamie Clarke scored the point of the game on the 45th minute to make it 2-20 to 0-03.  Clarke picked the ball up roughly 60 yards from goal on the left hand side, and went on a determined run shrugging off Stephen Finnegan before putting the ball over from a difficult angle.

Barry Loughran managed to grab Cruppen’s fourth score, when he scored a great point from out right.  This point only seemed to motivate the county champions as they went straight back on the attack and put their tally to 2-22 with John Murtagh slotting over.

Things got worse for Carrickcruppen when Kyle Carragher was brought down by Karl McVerry and referee Oliver Hearty pointed to the spot.  Jamie Clarke stepped up and made no mistake, finishing tight into the corner.

Kyle Carragher and Aaron Kernan scored Cross’ final points of the match, and the inspiring Paul Keenan got one for Carrickcruppen just before the finish, as this one side game ended game 3-24 to 0-05.

It was difficult to watch this game throughout because Crossmaglen simply looked to be on another level.  Donegal showed in the All-Ireland Semi Final that “unbeatables” can be beaten.  But it’s difficult to see how any club could pull off a similar achievement in the Armagh Senior Football Championship this year by knocking out the holders.