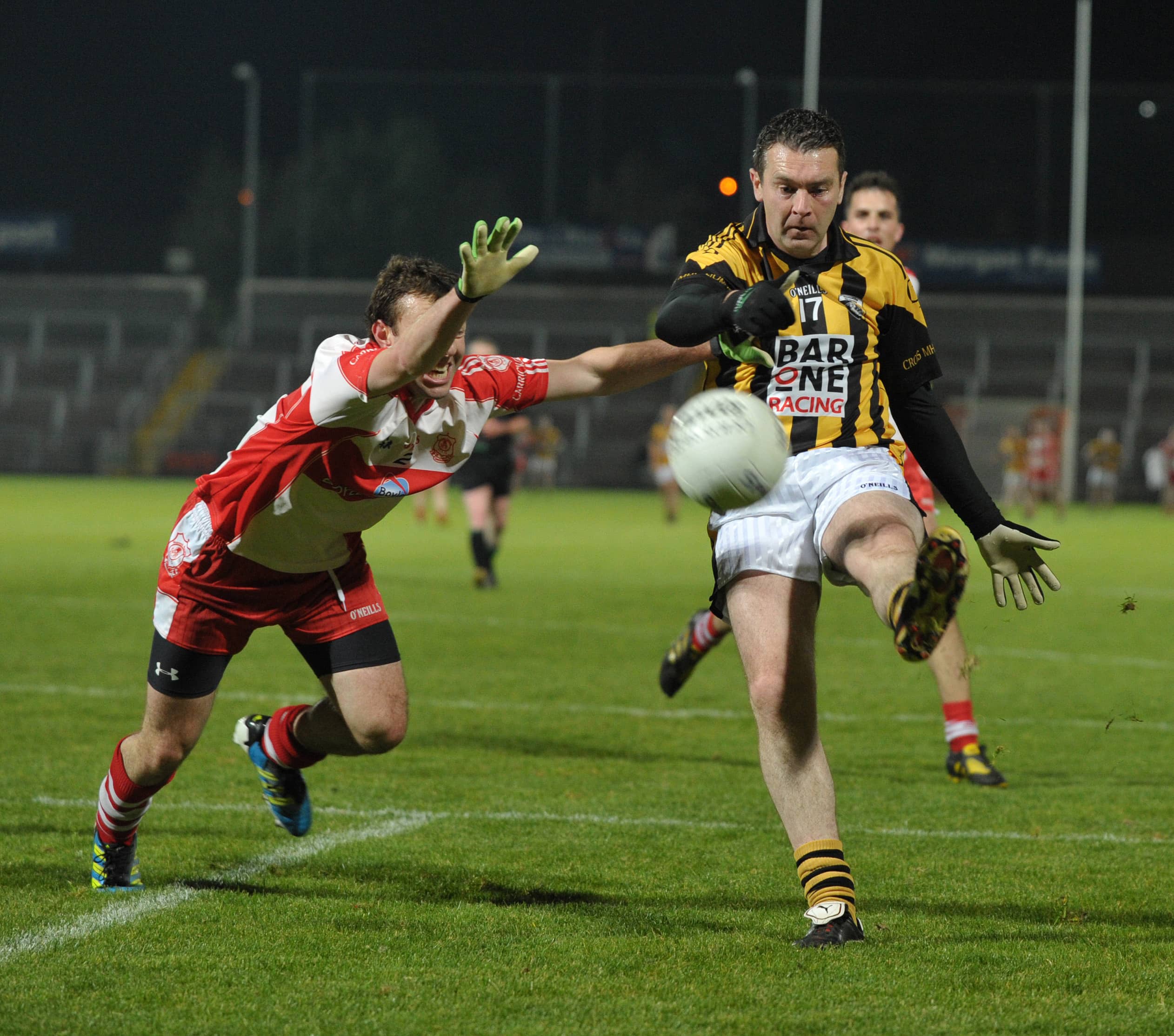 CROSSMAGLEN overcame what proved a Carrickcruppen minefield in the semi-final of the Senior Championship to book their place alongside Pearse Ogs in the decider next month. Guess who’s back?: Jamie Clarke’s return from the United States heralded a change upon his second half introduction against Carrickcruppen in an enthralling Armagh Senior Football Championship semi-final held in the Morgan Athletic Grounds on Saturday evening. Picture: Conor Greenan

It could have easily went the opposite way but on the night, Cross’, and in particular Oisin McConville did enough to survive this scare.

Cross opened the scoring through McConville and soon raced into a 5-1 lead after 13 minutes with Kyle Brennan, Martin Ahern and Aaron Cunningham all chipping in. McConville managed a second point with Declan Carville registering for ‘Cruppen.

Then came the ‘Cruppen surge as they registered three points without reply before a Kyle Carragher brace put three between the sides once more.

A sublime Johnny Hanratty goal for Cross’ then tipped the scales hugely in Crossmaglen’s favour but that security was short lived when, 90 seconds later, Caolan McCullough fisted the ball beyond Paul Hearty to reduce the deficit to three.

Cunningham and Brennan in the Cross full forward line tagged another two for the reigning All-Ireland champions before Carville send a fantastic shot between the posts just on half-time.

Full back Paul Kernan went off during the first half for what looked like a dislocated shoulder, an injury the Cross’ man has had problems with previously.

The second 30 minutes began just as the first did with Cross grabbing a stranglehold of the game. Aaron Kernan knocked over a left-footed free with Johnny Hanratty hitting another point just over a minute later. Crossmaglen would not register for another 18 minutes.

In that time Declan Carville hit a point while man-mountain Paul Keenan rose highest to divert a long ball into the back of Hearty’s net. With two points in it Crossmaglen needed to respond but they didn’t as Mark Patton chipped over another for Cruppen. By this stage the Athletic Grounds was buzzing.

However, veteran forward McConville was on hand to send over two excellent points to epitomise exactly what Cross are about. When the backs were against the wall and they’re in the mire, someone (and it has been McConville more often than not) will drag them out. Nonetheless the drama was not over as two and half minutes into injury time Carrickcruppen scrambled the ball into the net for a third time through Declan Monaghan to leave just two points in it, and with enough time to go for goal again.

But Cross’ being Cross’, it was them who had the final say as Paul McKeown, another substitute, rifled a point over at the death.

Crossmaglen will now play Pearse Ogs in what should prove to be an epic county final on October 14.