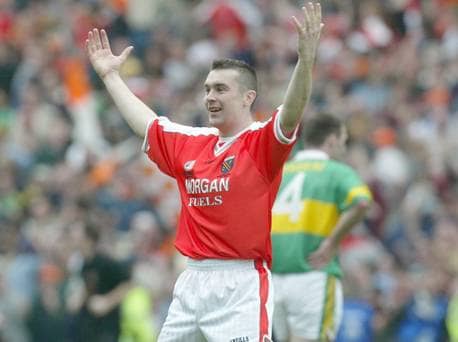 KEY panellists from the Armagh 1977 All-Ireland finalists and the heroes of the 2002 All-Ireland Championship team will be coming together for a special charity fundraiser next Thursday, May 16.

The ‘Legends and Heroes’ night – which starts at 7.30pm in the Canal Court Hotel in Newry – will be in aid of the Newry Hospice and St Vincent de Paul Society.

The All-Ireland final of 1977 is remembered in County Armagh to this day and, although beaten by Dublin, the team has a special place in the heart of the Orchard County supporters.

The 2002 team rode in to the All-Ireland final against Kerry on the wave of an impressive Ulster Championship success, being the last team to win in the 20th Century and the first victorious in the 21st Century (1999 and 2000).

With teak-tough defenders in the McNulty brothers, Francie Bellew and Kieran McGeeney, a dominating centre-field of John Toal and Paul McGrane and forwards of the calibre of the McEntee brothers, Oisin McConville, Diarmuid Marsden, Stevie McDonnell and Ronan Clarke, the biggest mystery is how such a talented team only brought the Sam Maguire back to the County once!

All Armagh supporters are invited to come along to this special charity evening in the Canal Court Hotel next Thursday. Tickets cost just £10.