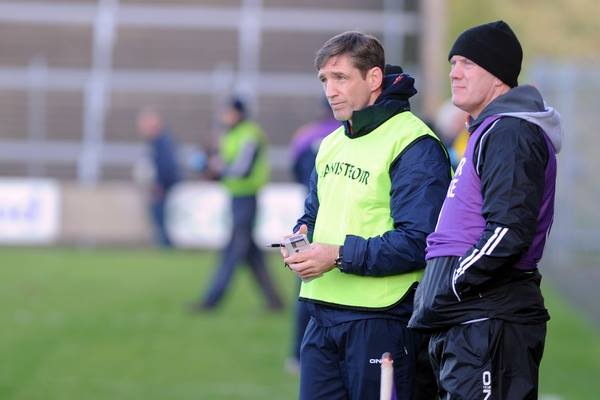 Prior to the game, many knew that Fermanagh were going to be Armagh’s toughest test to date this season. Both sides entered the game with 100 percent records, and Fermanagh had the finest defensive record in all four divisions, conceding just 30 points in three games.

Armagh certainly didn’t pass their first big test with flying colors, they were outscored 1-09 to 0-04 after the 23rd minute last night. But it was no disastrous fail either, despite that unflattering statistic – Armagh fans will be overjoyed by the quality of football their side produced in certain periods of the game.

They absolutely rattled Fermanagh in the opening 20 minutes, and became the first side to grab a goal against the Erne men in the league this year – when Miceal McKenna showed great strength and determination to stay on his feet after being pushed on the back before slotting past Treacy.

Armagh were restricted 0-03 in the second half, quite a deceiving contribution because with 12 minutes to go Armagh were ahead by four and looked to be in fair control. But Fermanagh’s persistence paid off and Sean Quigley guided them on route to drawing level in the closing stages, notching an overall tally of 0-06.

It all began to go wrong on the 66th minute – Armagh were leading 1-10 to 1-07, Micheal McKenna was bundled to the ground 20 yards from goal, and trounced on by several Fermanagh defenders. After a strange delay in his decision, referee Barry Cassidy, blew his whistle and awarded a free kick for Armagh.

A sure score was on the way, the taker could have also delayed the strike and gave Armagh a four point lead with three minutes of normal time remaining. A number of Armagh players reacted quite viciously, Ethan Rafferty and Aidan Forker consequently received yellow cards for their actions and Cassidy gave a hop ball. Fermanagh won possession, worked the ball out of defense and one minute later Ryan Jones reduced that gap to two points.

Fermanagh did show great heart and probably did deserve a point in the end, but considering Armagh retained their lead right up until the final minute, they will look at this as a point lost. It would be harsh to pin all the blame on the actions of certain players on the 66th minute, but they certainly did have a massive effect on the final result.

Miceal McKenna had yet another fine night on the field for his county, and was a strong contender for the man of the match award. The former U-21 captain has settled into senior football superbly this year. Grange supporters had been crying out for this creative player to be given his chance for quite a while, and now we can all see why.

McKenna caused a lot of trouble for the Fermanagh defense, McClusky couldn’t match his legs right from the start. Armagh’s centre half forward constantly found space and won plenty of ball in attack. The youngster is immaculate in possession and really knows how to punish opponents, he constantly shows great composure, instantly turning and seeking runners in attack.

If there are no obvious options are available, he possesses the skill to beat defenders and dodge tackles in order to give others time to find space, or slot over his own scores. Come Championship time, this man from the Grange could have a very important role to play.

In recent years many Armagh fans were questioning why the Minor side from ’09 hadn’t taken the senior stage by storm. That squad tore the Minor Championship apart six years ago, with no team even coming close to their level. Their achievement came at a time when the Seniors were rolling away from that golden period in the early noughties.

So much pressure was heaped on to these boys shoulders, and many were left disappointed that some of the star names hadn’t helped the seniors climb back up the ranks in the following years. Gaelic Life posted one interesting fact this week – 10 players from the Minor’s starting 15 in the 2009 All-Ireland final, have now started for Armagh at Senior level.

And some of have made great statements for themselves, Rory Grugan’s last gasp free-kick against Monaghan in the Championship last year, McParland’s hat-trick against Wexford, James Morgan has showed signs of being a top tier corner back but has been very unfortunate with injuries.

Other names include Andrew Murnin, Decky McKenna, and Peter Carragher – who have all got proven qualities. It’s not only the ’09 stars that are signaling a promising future for the Orchard – Aaron Findon at 22 years of age could match any midfielder on his day, Ethan Rafferty, 20 years old, showed just how great that left foot is last night with some spectacular scores and Geoghan, another player aged under 25, seems to have secured that number one spot.

Armagh’s record on the road has been rapturous this year, they trounced Antrim by 10 points in Creggan in the McKenna in January. In the league they have slaughtered Wexford and Limerick, clocking up a total tally of 4-29 in both games.

Home form has not been so flattering, ArmaghI have listed the results of the Orchard’s home games this season below:

In five games Armagh have won just two, a three point victory over St Mary’s, and two injury time points from Jamie Clarke helped them overcome a brave Tipperary side.

Kieran McGeeney admits that the Athletic Grounds isn’t the fortress it once was, but says that will come with time. His side are going through a transition at the moment, and need time to go on an intimidating run which will help build a culture and atmosphere.