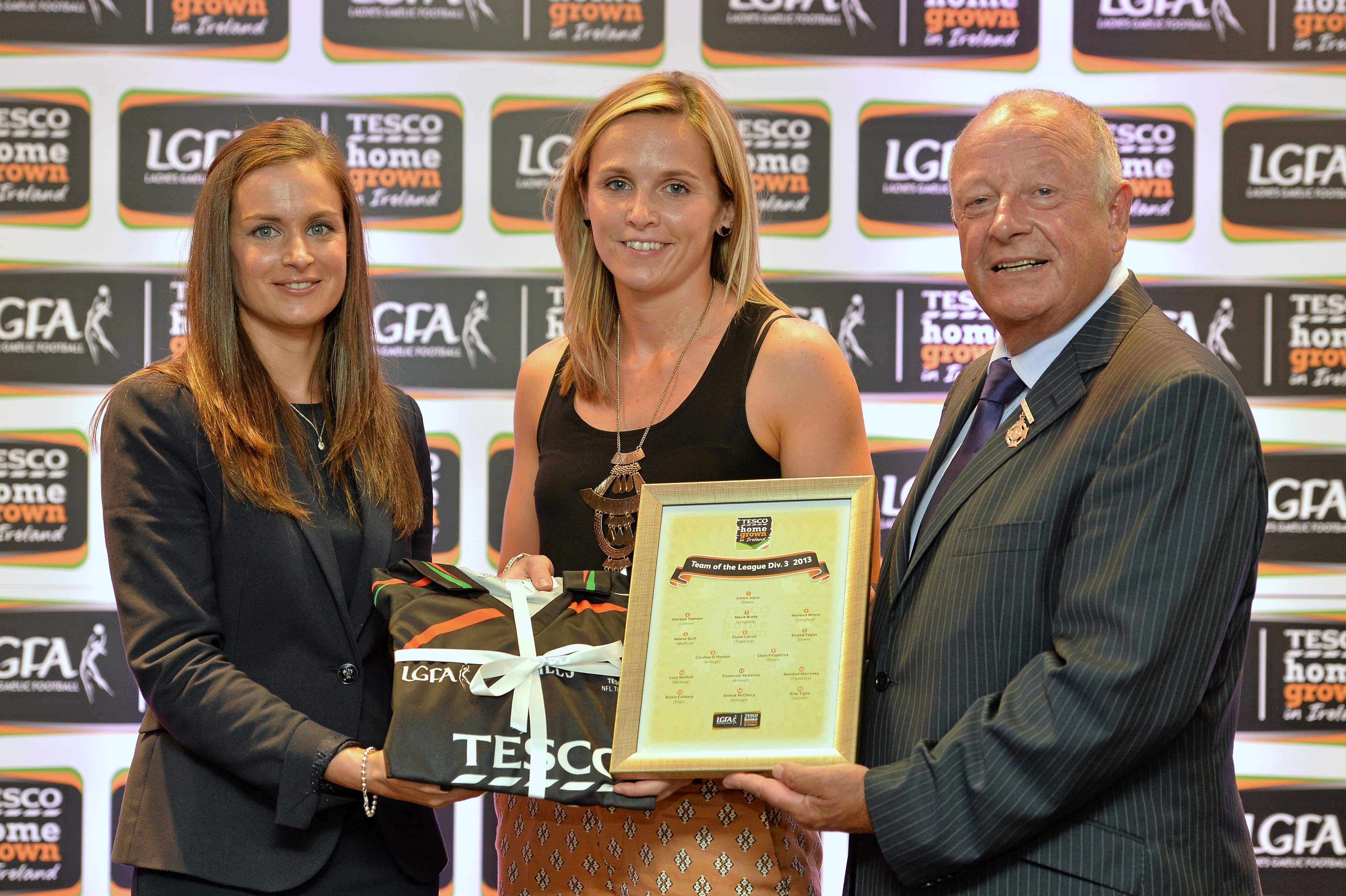 Armagh ladies legend Caroline O’Hanlon has extended her record as the most decorated player in National League history by being named in the Tesco Team of 2013 alongside county colleagues Sinead McCleary and Fionnuala McKenna.

The only player to have made the Team of the League in all four seasons since the awards were introduced, double All Star O’Hanlon predictably received the specially commissioned No 9 jersey at last Thursday night’s ceremony in Croke Park.

Carrickcruppen’s O’Hanlon captained the Orchard outfit which topped the Division Three table this spring with six straight victories before being agonisingly pipped at the post by a Down goal in injury-time of last month’s final.

She typically produced dominant displays throughout, led by tireless example and scored 3-24 from midfield, making her inclusion in this select side inevitable even though Armagh can feel hard done by not to have more than three representatives.

“We’d the best defensive record of any team so it’s disappointing none of our defenders were recognised,” muses Armagh manager James Daly, before paying tribute to the three Orchard stars selected.

“You just couldn’t have the line-up without Caroline, Sinead and Fionnuala – we’re used to the first two being in the frame for honours, rightly so, and you couldn’t look past McKenna considering how she has stepped up this season and shouldered responsibility.

“As competitive people and true team players, it goes without saying that all three girls would happily exchange personal recognition for promotion but their exceptional contributions do deserve to be highlighted.

“It says everything about O’Hanlon that she has been honoured every year since this started, regardless of what division Armagh have been in and whether the team has struggled and got relegated or been pushing for promotion.

“Year after year she has kept the highest standards and I’ve no doubt that if Caroline came from Cork she’d have an incredible collection of medals at this stage, but she’s passionate about winning with Armagh and hopefully her great service will receive further reward.”

O’Hanlon wasn’t there to receive her presentation in person due to the event clashing with her duties as an international netballer, but the applause which greeted the announcement of her name underlined the respect in which the 2012 All Ireland Intermediate Player of the Year is held.

“There’s huge respect throughout ladies football for Caroline O’Hanlon and for her achievements, character and commitment – and that was evident at the event. The master of ceremonies couldn’t say enough good about her,” reflects Daly.

“It’s all been said at this stage, almost to the point of being boring, but she gives everything, keeps producing to the highest standards and deserves every possible plaudit.  She’s an exceptional athlete and leader who we’re privileged to work with.”

Converted full forward McCleary was handed the Tesco team No 14 jersey in spite of never having played there prior to the fourth round of the recent campaign and missing the last three league games due to a midwifery placement in Malta.

But the versatile Clann Eireann player scored six points in Armagh’s agonising defeat in the final and finished top of the Orchard charts for the league with 3-28, four points more than O’Hanlon with McKenna in third.

Even though she was selected in a showpiece position in the ceremonial line-up on the basis of three matches, no-one could argue against the inclusion of what Daly describes as the most under-rated player in Ireland.

Having starred for Armagh at full forward, the 25-year-old reverted to the half back line in the Ulster team which retained their interpro title and last season she shone in midfield as Armagh won the All Ireland Intermediate Championship.

No wonder Daly believes that midwife McCleary could deliver effectively in any position or regards her as an invaluable asset.  In addition to her fine performances with Armagh and Ulster so far in 2013, she skippered Queen’s University to an historic success in March when they won the O’Connor Cup for the first time ever.

“I think Sinead McCleary is the most under-rated player in Ireland – a phenomenal player and athlete who would win one of these awards in any of the 14 outfield positions such is her versatility,” insists Daly.

“She’s an accomplished footballer who will willingly concentrate on defensive duties or serve as the main attacking threat depending upon where the team’s need is greatest.

“Managers dream about having players like Sinead McCleary who can do so many different jobs, though few would have her mix of experience, natural ability and work ethic.  She’s a leader and a useful free-taker and an absolutely key player for Armagh.”

Although only out of school last summer, McKenna has emerged as a significant force for Armagh and took over responsibility for the right-footed frees while McCleary was out of the country.

She scored all but two points of Armagh’s 1-9 in the narrow win away to a Leitrim team which had at that time four wins from four in 2013 and hit the net again the following week in the one-point victory over Tipperary.

An exceptional prospect, the Armagh Harps youngster was recently crowed Armagh City and District Sportswoman of the Year and, like O’Hanlon and McCleary, she simply couldn’t have been left out of the Team of the League line-up.

Daly has previously described the 19-year-old as having the best attitude of any young player he has ever worked with and it is a tribute to her mature temperament that she seems to take every accolade, like every challenge, in her assured stride.

The only Armagh player to wear the same jersey in all nine National League games this year, the consistent Sarah Marley of Lissummon, would have been a popular fourth Orchard representative alongside the three stand-outs but she has been overlooked like unsung heroes tend to be.

Champions Down will also feel a bit hard done by that only three of their players made the Team of the League, in which all eight Division Three counties have at least one representative selected.