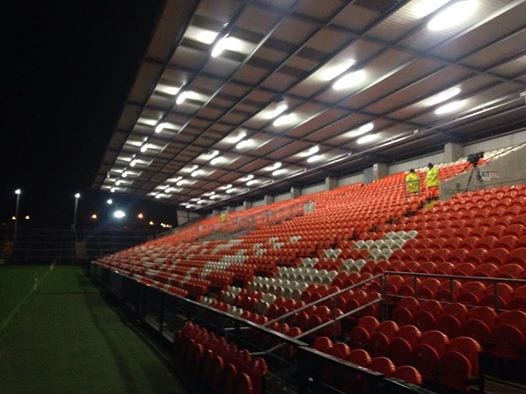 Armagh defeated St Mary’s in their final group match in the Dr McKenna Cup on a wet and windy night at the Athletic Grounds, winning 2-11 to 0-14.

Kieran McGeeney’s men will have to wait for the other ties to be played elsewhere before they know if they made the semi-cut or not.

Jack Grugan, brother of Rory, who was a key member of the Armagh squad last season, opened the scoring with a lovely point from the left wing for St Mary’s. His club mate Gavin McParland soon levelled matters with a free kick, after Sean Connell was fouled by James Morgan.

Gavin McParland really helped Armagh crawl back into the game by scoring 1-02 in a three minute period, his goal coming from a penalty after Sean Connell was fouled in the area.

St Mary’s didn’t drop their heads and continued to try their luck from range with the wind blowing heavily in their favour. Scores from Ryan Johnston, Grugan and a Thomas Cavanagh free allowed them to regain their lead.

Ciaran McKeever struck final point of the half with Armagh’s second score from play. The teams went in at half time with St Mary’s leading 1-05 to 0-11.

The St Mary’s students didn’t let the breeze affect them at the beginning of the second, Jerome Johnston scored a point in the opening minutes and Canavan stretched their lead after getting his hands on an exceptional cross field pass from Grugan.

The momentum soon changed and Armagh enjoyed a steady 15 minute period. Points from Tony Kernan, Eugene McVerry and Jamie Clarke made left Armagh trailing by just one at 1-09 to 0-13. McVerry and Clarke had been introduced as subs in the opening stages of the half and made a strong difference.

Armagh took the lead for the first time in the game when Gavin McParland grabbed both his and Armagh’s second goal. Ciaran McKeever passed a sweet ball to Jamie Clarke who then put the Ballymacnab man through on goal, McParland made no mistake with his finish.

Harps midfielder, Decky McKenna, and Sean Connell scored Armagh’s last two points of the night in the closing stages. Kieran McGeary pulled one back with an accurate point from distance but it proved to be little too late, as St Mary’s fell short despite their brave efforts.