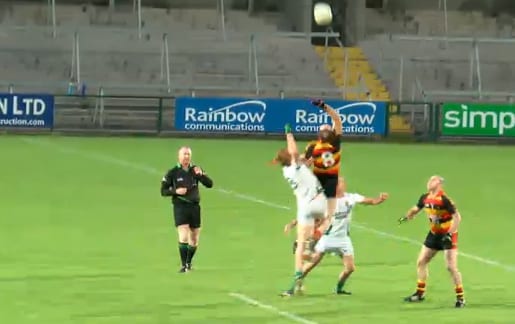 St Patrick’s Cullyhanna were dumped out of the Armagh Senior Championship by Granemore in an epic encounter at the Athletic Grounds on Friday night.

A kicking masterclass from Christopher O’Connor and a Brendan Boylan goal midway through the second half were the difference as Granemore upset the applecart to reach the quarter-final stage.

Despite a personal tally of nine points from Cullyhanna’s Aidan Nugent, it wasn’t enough as the league leaders crashed to their second championship defeat on the bounce.

It was Jason O’Neill’s 21 yard free five minutes into injury time that ultimately was the difference but a huge second half performance from county panelist Caolan Rafferty aided Granemore’s cause.

It was evident from the outset that Granemore were keen on setting up a defensive blanket to stifle the Cullyhanna attack but a lack of discipline in the tackle helped render that tactic redundant.

Aidan Nugent got his first of six first half points – five frees – inside the opening two minutes as he struck over the deadball from close range.

Granemore responded through their captain Jason O’Neill who slotted over a free of his own from out on the right on six minutes.

Gareth Mackin responded for the south Armagh men as he waltzed through unmarked to score with the outside of his right foot, but then came the score of the game from Granemore’s O’Neill, who fired over from 50 yards to level the score for a second time.

Nugent and O’Neill traded points once more before Christopher O’Connor gave Granemore the lead for the first time in the game with a superb free from distance.

Three consecutive points from Nugent – the third of which from play gave St Pat’s a little bit of breathing space for the first time in the match. At this stage, Cullyhanna were beginning to camp inside the opposition 45′ and looked in total control.

However, on the counter, Brendan Boylan, following an incisive, deep pass from O’Connor, slotted over from wide on the left to reduce the deficit to a single point.

Nonetheless, it was St Pat’s that saw out the half the stronger with Gareth Mackin, Aidan Nugent (f) and Eugene Casey tapping over to give them a four-point lead at the break.

After the interval it was Granemore who upped the pace of the tie, with O’Connor (f) adding to his account within 60 seconds of the restart.

Two minutes later and he was at it again; this time a short free-kick was given back to him for an easy tap over in front of goal.

Two frees from none other than Nugent extended Cullyhanna’s lead back to four but instead of pushing home their advantage, they allowed O’Connor to replicate his quick free kick routine three minutes later, giving him the opportunity to score his fourth point.

Then came the moment this tie flipped on its head. Caolan Rafferty won a high ball in the middle before bursting forward, splitting the opposing defence, allowing Boylan the chance at goal, which he duly took with his left – the ball nestling in the bottom corner, with the ‘keeper left scrambling.

Rafferty was again instrumental in the next score; another lung-busting run opening up the opportunity for his namesake, Ryan to fist over from close range to give Granemore the lead with nine minutes of normal time to play.

Eugene Casey responded for St Pat’s with a minute to play before O’Conner scored his fifth of the game – another free with the outside of the right boot.

But there was still time for more drama. Aidan Nugent scored a stunning point from distance in what looked like a last gasp equaliser, but with just seconds remaining of the five minutes of injury time, O’Neill tapped over an easy 21-yard free to book his side a place in the Armagh Senior Championship Quarter Final.

Earlier in the night, St Patrick’s IIs beat Lissummon (0-8 v 0-7) with the last kick of the game to progress in the Junior Championship.