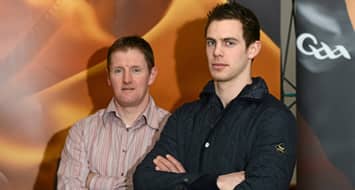 ARMAGH’S Ryan Gaffney has been named in the starting line up for Ulster’s Inter-Provincial Hurling Championship game with Munster on Sunday.

As expected, Antrim players feature heavily in the squad with nine representatives in the starting fifteen with Cushandall’s Neil McManus (pictured with O’Kane) named as captain.

The game will be part of an appetising Athletic Grounds double-bill as the hurling throw-in at 12.30pm is followed by the football tie between the same sides at 2.15pm.