Armagh in fight for survival after Louth defeat 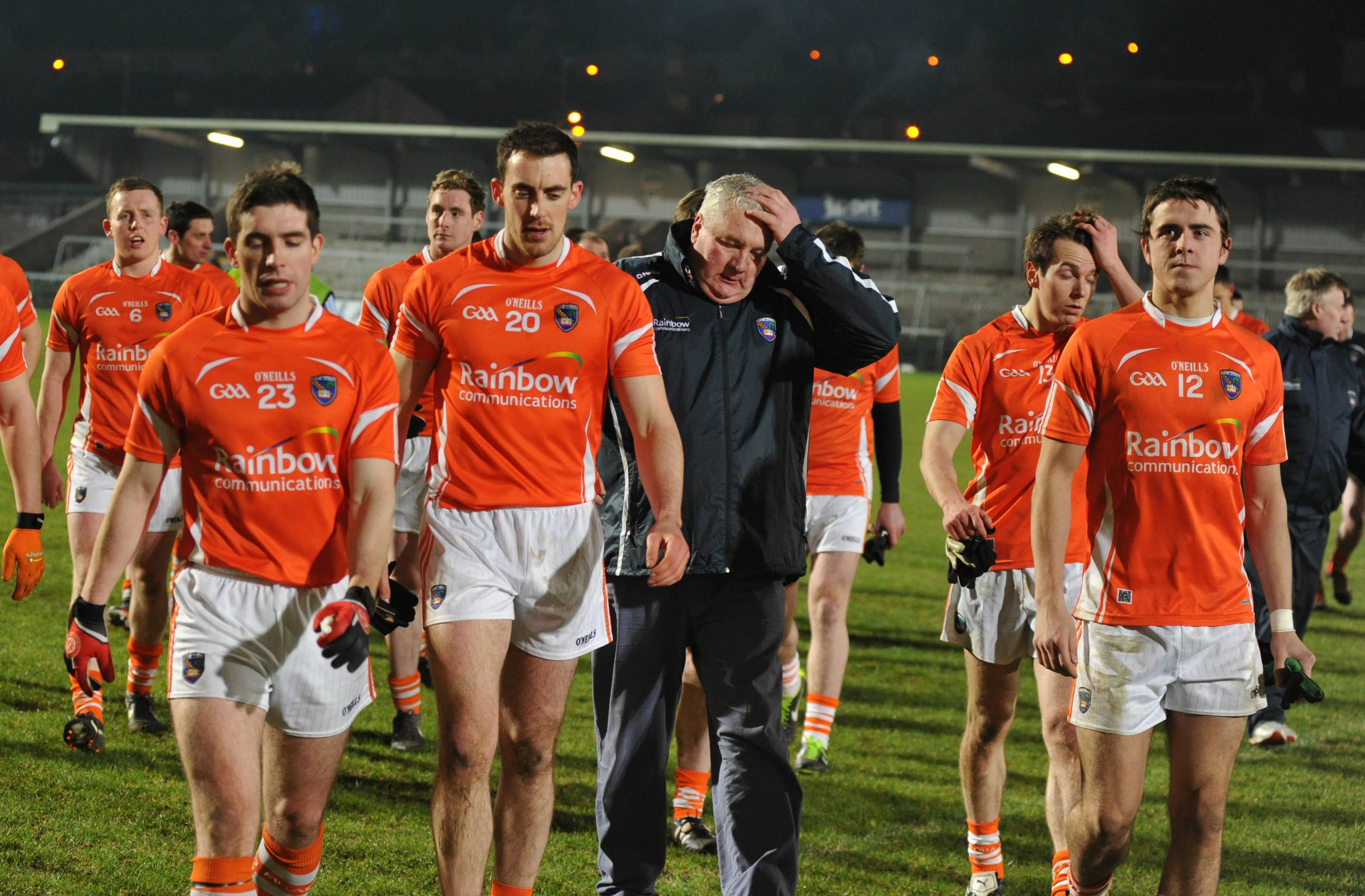 By Micheal McKenna at the Athletic Grounds

IT’s now a battle for survival in Division Two as Armagh surrendered a late lead to Louth in what was an extremely absorbing encounter at the Athletic Grounds on Saturday evening. Grim feeling: Armagh manager, Paul Grimley and his charges cut forlorn figures in the aftermath of a two point defeat at the hands of Louth in their NFL Div. Two meeting in the Athletic Grounds on Saturday night. Picture: Conor Greenan

With the game reaching it’s climax, the impressive Stephen Harold fisted Armagh’s final score with only three minutes of normal time remaining. Armagh had been playing with 14 men from the 45th minute when James Donnelly was shown a second yellow, however, that was later evened out when Louth’s Gerard Hoey was shown the line for a second bookable offence.

Armagh were looking good for the win but a magnificent Brian White free wide on the left levelled matters late on and within three excruciating injury time minutes Armagh were faced with an agonising defeat as Casey Byrne and Shane Lennon sealed the victory for the Louth men.

The game was nip-and-tuck throughout and both sides went in at half time level – 1-05 a piece.

The first real breakthrough in the game came the way of Louth as half-back Adrian Reid bundled over the line to give the ‘Wee County’ a four point cushion after 22 minutes of play.

Three minutes later Tony Kernan – in for the absent Jamie Clarke – dummied the goalkeeper and slotted home after some good build up play from Decky McKenna.

The second half was much of the same, nonetheless, Armagh rode their luck at times as Phillip McAvoy saved brilliantly when the sides were level at 1-7 each and Brian White sent a penalty wide after a Brendan Donaghy foul.

Not so ‘Andy: Gavin McParland finds his way to goal blocked by Louth’s Andy McDonnell during their NFL Div. Two meeting at the Athletic Grounds on Saturday evening. Picture: Conor Greenan

Neither team seemed to want to win the game but it was Aidan O’Rourke’s Louth charges that took the points back across the border.

A despondent Paul Grimley spoke after what he thought was a strange game.

“I was bemused with that first half performance because I expected a feisty encounter but it didn’t really take that pattern in the first 35 minutes. I thought we were up for the game but Louth disarmed us a little. The second half the game started to heat up and became more of a local derby but I would rather that we would display the fighting qualities throughout the 70 minutes rather than have a period of the game where we find out whether we have it in us or not.

“I thought we were basically in control of the game for the last quarter of an hour, we were a man down. We used the ball fairly well but we missed an awful ridiculous amount of chances. The free we gave away at the end was unfortunate for us but that’s the way it goes.”

“It’s no bad thing for us because it will teach us that when we make mistakes at home we’ll have to work harder away from home to get a result next week and of course we have another game at home to Galway on the seventh but if we put teams away when we have the chance these things might not come back to haunt us. We have a bigger battle on our hands now than we did before the game this evening.”

“The injuries are piling on now,” said Grimley “we have another three injured there and they’re starting to accumulate with no guarantee that the existing ones will be cleared up. We’re down to a skeleton squad at the minute but i’m not making any excuses. We have a panel of 42 players and I treat them all the same, with belief in every one of them.”

Armagh face Westmeath away next weekend in what has become a must win game.