Armagh hurlers lose to Down in Ulster Championship 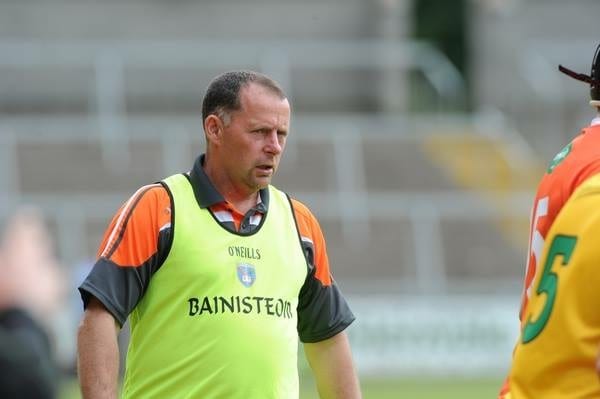 Armagh hurlers entered the Ulster championship on Sunday and having put in a good display in the first half, it was a scoring blitz by Down early and late in the second half that ended their aspirations.

The scoring got underway with Down corner forward Danny Toner, followed quickly by Cahal Carvill with a great score from the wing and a converted free from Ryan Gaffney.

Steven Dineen added a second for the Down men and a monster free from Gareth Johnson fell short to Simon Doherty who hit it up the field and when the sliotar finally landed in front of Eoin McGuinness, he finished to the net to put Armagh 1-2 to 0-2 in front.

Two quick points for Down through Paul Sheahan and Danny Toner reduced the gap to one. Scores were traded with Shea Gaffney for Armagh hitting one from a tight angle and James Coyle for Down.

Derrynoose man Petey McKearney who started in place of Conor Corvan stepped up to hit a score and when Simon Doherty caught and cleared another long range free from Gareth Johnson, Armagh captain John Corvan pushed the hosts ahead by three.

Johnson then opened his account with a converted free which was added to by Steven Dineen, and after a super effort from Cahal Carvill, the score stood at 1-6 to 0-7. Dineen added his third of the game, before Gaffney slotted over another free and a point from Down half back Fintan Conway brought the gap down to one.

As half time approached, the frantic pace continued and when Martin Moan hit a three pointer, it took the Down men all of 30 seconds to cancel it out with Fintan Conway raising the green flag at the other end.

Armagh responded straight away and went on the attack with Cahal Carvill being fouled in the small rectangle and a penalty being awarded. Up stepped Ryan Gaffney, but his effort trailed wide and a final score of the half fell to Gareth Johnson to bring the sides in level.

Down got off to a super start in the second half and hit 1-4 in the first 5 minutes, the goal coming from James Coyle one minute after the restart and points coming from Fintan Conway, Danny Toner and James Coyle with two.

Cahal Carvill and Declan Coulter got the Armagh scoring underway, but a converted free from Gareth Johnson gave the Ardsmen a six point advantage.

Gaffney converted a free and struck another seconds later, but this time his effort came off the upright and was scrambled to safety. Down’s Declan McManus got in on the scoring and two frees from Gaffney kept Armagh in touch.

A Gareth Johnson effort pushed Down five in front again and worse was to come for the Orchard when recently-introduced substitute Caolan Bailie finished to the net to leave the score 3-17 to 2-12.

Gaffney tried to restore calm to the Armagh men and converted a free but super-sub Bailie was soon celebrating his second three pointer and Down’s fourth.

Down continued to exert the pressure and the game was ended as a contest with another second-half substitute Michael Turley finishing to the net.

Scott Nicholson added to the scoring and with time ticking away, Armagh grabbed a consolation goal with Eoin McGuinness firing to the far corner to bring Armagh’s tally to 3-14. The game rounded off with Down scores through Danny Toner and Michael Turley.

While the game was end-to-end and tight particularly in the first half, it was two five minute spells of dominance that killed off the Armagh challenge.

While Armagh’s championship campaign came to an end, Sylvester McConnell can be pleased with his team’s commitment and effort this year and look forward to building on it for next year. Down will now take on Derry in the Ulster semi-final next weekend in Owenbeg, with the winners facing Antrim.