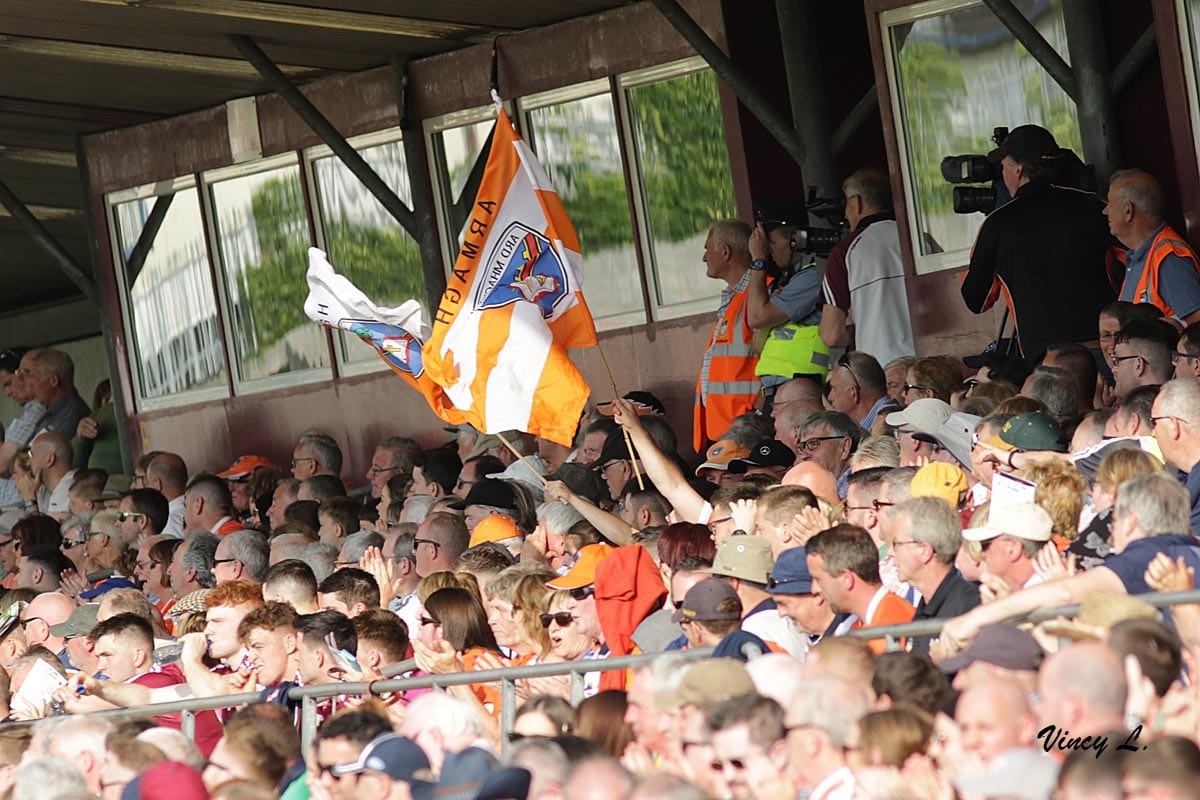 An absolutely incredible finish for Armagh this afternoon as they stormed back to victory to get the better of the Banner.

Having been four points down deep into the second half, the Orchard County ended four points up after seeing off Clare in their All-Ireland round three football qualifer at the Athletic Grounds.

A last gasp goal was just what the doctor ordered and a free-scoring finish of epic proportions nailed it for McGeeney’s boys, who triumphed 2-16 to 1-15 to begin an evening of celebrations.

Clare were first off the marks with a point from Jamie Malone but a Niall Grimley free levelled it.

Armagh settled in and two back-to-back scores from Rory Grugan – firstly a free then one from play – gave them a two-point early lead after eight minutes.

Grugan added another to his tally 11 minutes in before Clare narrowed the deficit, with Pearse Lillis and Eibhin Courtney getting in on the act.

It was all level thanks to Keelan Sexton after a good rally and a point from play courtesy of David Tubridy and Clare took the lead 17 minutes in.

Clare were making the most of their chances and Jamie Malone added his second from play in the 23rd minute, with Armagh having hit no less than five wides.

A Niall Grimley free from 13 yards and another point from Ryan McShane brought the sides level again before Courtney added his second from play.

The tit-for-tat scoring continued as Andrew Murnin equalised for Armagh and another point from play from Eoin Cleary -before Jamie Malone extended his personal tally to three – and Clare went in at half-time two points up and with all to play for in the second half.

And it was Armagh who scored first in the second period, with a point from play from Charlie Vernon, to pull one back.

But there were soon five points separating the sides as Clare hit four without reply, Pearse Lillis, Eoin Cleary, David Tubridy and Cathal O’Connor all hitting the target before Niall Grimley pulled one back.

And then Armagh were back in the game. Andrew Murnin drilled the ball into the bottom right hand corner of the Clare net giving keeper Roche absolutely no chance and the Orchard fans a much-needed shot in the arm.

It really was heart-pounding stuff and Clare were not letting their heads drop. They fought on valiantly to help extend their lead again with Cleary and Tubridy – who made a great showing at the Athletic Grounds – having taken points from play.

Three points was the difference between the sides and an in-form and ever-reliable Grugan pulled back two to make for an adrenaline-fuelled finish with half an hour of the second half played.

But then the most cruel of blows for Armagh. Eimhin Courtney was taken down in front of goals and a penalty awarded; Tubridy’s first effort was saved by Blaine Hughes, but he made no mistake with the rebound.

Niall Grimley brought the sides to within three points of each other during the last minute of normal time – a goal was all it would take.

And their wishes were answered – a goal from substitute Joe McElroy and further points from Grugan and Aidan Forker saw Armagh complete a comeback which will long be remembered.

A goal and four points in the last four minutes and what a transformation, as Clare’s senior football championship run ends suddenly in Armagh.