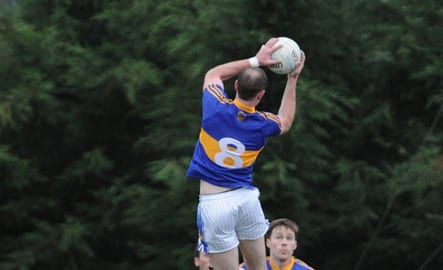 Maghery went clear at the top of the Senior League with a five point win at home to Granemore.

The visitors were looking dangerous throughout the first half, knocking over seven points in the process, and it looked like they were going in to the break with the narrowest of leads before Conor Mackle slotted past Granemore’s Anthony Mullen to give his side a two-point lead.

Granemore regrouped and started the second half the brighter, racing into a two point lead, but that’s as good as it got as Maghery stepped it up and went eight points in front.

Mackle rippled the net once more with Gary Carr registering his side’s goal late on, however, Daniel Forker added a fourth for Maghery as they ran out comfortable winners, extended their 100 percent start to their season.

Maghery travel to Annaghmore next Sunday with Granemore travelling to Armagh Harps.

These two unbeaten sides took to the field having recorded decent Championship results last weekend and it was Crossmaglen that continued their run.

However, with conditions far from ideal, it was the visitors that made the better start and after ten minutes were two points to the good.

Gradually Cross’ settled and four points in a row gave them a lead which they never relinquished.

Exchanges for the remainder of the half were even – the main difference being a Cross’ goal – which separated the sides at the break.

On the resumption it was the ‘Harps that exerted the pressure and only for stout defending Cross’ could have been in trouble.

With ten minutes left on the clock, the deficit was reduced to a single point, when Cross’ struck the net again – a killer blow which took the wind out of the Armagh harps’ sails.

Two well taken points at the end added a little gloss to the scoreline. This was probably Crossmaglen’s hardest game to date and owe a lot of their success to the brilliance of Paul Hearty who pulled of a number of first class saves.

Cross are away to Ballymacnab next weekend while Armagh Harps host Granemore.

Cullyhanna got back on the league winning trail with a routine victory at Carrickcruppen.

Playing with the advantage of the strong wind St. Patrick’s were generally on top and at the break had built up a comfortable 9-1 lead.

A brace of points from Gareth Mackin and Robbie Tasker in the opening minutes of the half suggested that they were well capable of notching scores against the wind.

‘Cruppen did come into it and also had a brace of well taken points.

In the 10th minute came a decisive score when a good passing opened up the home defence to let Aidan Nugent palm to the net.

Three minutes later a similar attacking move saw mid-fielder Barry McConville on the end of the move to also palm to the net.

Leading by 15 points the game was as good as over before the match had even entered the final quarter.

From there to the end it was a matter of playing out time but Cullyhanna still had enough hunger for scores to see Robbie Tasker fire to the net for his team’s third goal.

In the Intermediate League, Clann Eireann continue to bulldoze their way through the division with a four-point win over neighbours Eire Og (2-13 v 2-9).

Grange jumped up to joint third (with four other teams) and heaped more misery on Clan na Gael with a two point victory (0-10 v 0-8). The Lurgan side has only won one game this season and sit on the edge of the relegation zone at this early stage.

Silverbridge picked up a vital two points as they edged further up the league and in the process prevented Madden from going second. Their goal making the big difference as they ran out 1-8 to 0-10 winners