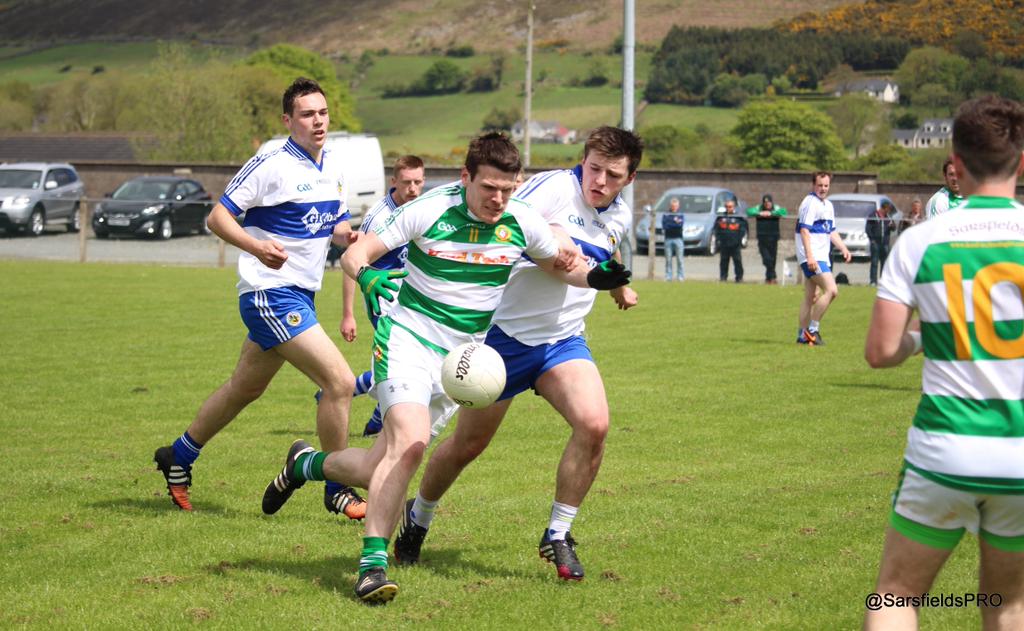 The Cullyhanna senior side returned to competitive action with a long trip to Lurgan to face St Paul’s in a repeat of May’s championship encounter. The game played in desperately difficult conditions with a strong breeze and persistent rain meaning that quality football was always likely to be at a premium.

In a reversal of early fortunes from the championship encounter, it was St Patrick’s who made the better start with Gareth Mackin pointing an early free. Five minutes in, Shea Hoey released Eugene Casey through on goal but before a shot could be released, the Cullyhanna forward was hauled to the ground unceremoniously within the large rectangle. Gareth Mackin made no mistake with the resultant penalty to put his side four to the good.

Perhaps unsurprisingly for a team badly in need of points to stave off relegation, St Paul’s rallied and kicked four of the next six scores to halve the lead by the 26th minute as a Gareth Mackin point from play and an Aidan Nugent free provided the Cullyhanna response.

It was the Nugent family to the fore for Cullyhanna towards the end of the half as Aidan kicked another two points, one from play and one from a free before his cousin Connor obliged with a difficult score from a tight angle. Two late points edged St Paul’s back into contention with only a goal separating the sides at half time, 1-6 to 0-6.

Cullyhanna emerged for the second half in determined fashion and it took Gareth Mackin only three minutes to add to his side’s tally with a pointed free. A seemingly crucial score soon followed as an excellent Barry McConville fetch at midfield allowed Shea Hoey and Eugene Casey to combine as the latter palmed to the net for a second St Pat’s goal.

When a Barry McConville point put St Pat’s 8 clear with nine minutes played in the second half, it seemed as though a comfortable victory was assured but the home side’s hopes were revived when sloppy Cullyhanna defending allowed them in for a goal.

The teams then exchanged pointed frees before St Paul’s exerted a considerable spell of pressure between the 47th and 57th minutes, pointing three frees with an Aidan Nugent point from play serving as the solitary Cullyhanna response. Entering the final stages, only four points separated the sides but Eugene Casey bore the responsibility of seeing Cullyhanna safely home, kicking two late points to assure victory for the title contenders.

This was a tricky hurdle successfully negotiated by a Cullyhanna side who always seemed relatively comfortable without producing their best football at any stage. With other results going in their favour, the league title is now in our own hands but any slip ups at this point are likely to prove fatal.

On the day, Sean Og Irwin excelled in defence while the scoring contributions of Aidan Nugent and Gareth Mackin were of vital importance. The old adage that goals win games rang true on this occasion and it was the excellent combination play of Shea Hoey and Eugene Casey which produced both major scores for St Pat’s. Next up for St Pat’s is a tough home fixture on Friday night against a Killeavy side who will no doubt be desperate for points.

Elsewhere, Killeavy picked up a massive two points with victory over fellow strugglers Tir na nOg. That victory take’s Steven McDonnell’s men just a point off their Portadown counterparts with a game in hand.

Maghery’s title challenge was all but ended following a spirited comeback at home to Armagh Harps. A point leaves the Loughshore men four points off the lead with just three games remaining while ‘Harps lie just a point behind Cullyhanna.

Dromintee all but guaranteed their safety with victory over Forkhill while Sarsfields kept pressure on the leaders with a win over Wolfe Tones on Sunday evening.

A return to league action after the mid-season break saw Mullaghbawn face off against South Armagh rivals Whitecross on Sunday afternoon.

Mullaghbawn tend to find Whitecross a difficult venue to visit, and the terrible conditions meant that the travelling side were going to have to work extra hard if they were to come out on top.

Mullaghbawn registered the first point in the opening stages but had to wait another twenty minutes for the next, a goal coming off a smart move.

In between, the hosts landed a goal and four points. Mullaghbawn were very unfortunate not to be at least on level terms as half time, as they were on top for most of the half. Facing into a stiff wind, the second half performance was exceptional.

They showed great guts and determination to land an impressive 1.06. There were great scenes as the end as momentum continues to build for the victors.

The seniors have a double header next weekend. They will host old rivals Clan na Gael at home on Friday evening before travelling to St Peter’s for a re-fixture on Sunday afternoon.

The sides swapped frees in the opening minutes with Oliver Gaughran getting the Shanes score before two Paul O’Rourke points  edged the Shanes in front with Keady replying with another pointed free.

This proved to be Keady’s final score of the half as the Shanes went on to totally dominate the opening period, scoring a further 1- 5 without reply. Two points from Oliver Gaughran and one from Dan Fearon put the Shanes four to the good before Paul O’Rourke finished the ball to the back of the Keady net to put the Camlough side firmly in control. Late points Sean McLoughlin and Paul O’Rourke saw the Shanes go into the half-time break nine points ahead, 1 – 8 to 0 – 2.

Two early points for Keady early in the second-half reduced the deficit to seven but that was as good as it got for the away team as the Shanes prevented them from scoring for the remainder of the game whilst a adding further eights to their own total. Paul O’Rourke (0 – 1), Marc Feehan (0 – 2), Nathan Morgan (0 – 1), Oliver Gaughran (0 – 1), Oisin Murphy (0 – 1), Ryan Evans (0 – 1) and Shay Carroll (0 – 1) were all on target as the Shanes played some great attacking football and ran out fully deserved winners.

The Camlough men played some great football on the night and their defensive unit were magnificent throughout, breaking up numerous Keady attacks and getting their own team moving forward. A special mention must go to young Michael McParland who made his senior debut as second-half substitute during the game and never put a foot wrong. Shane O’Neills also send their best wishes also to the Keady player who suffered a nasty looking ankle injury during the match.

Shanes were back in action on Sunday afternoon with an away game against an efficient Grange side, despite putting in a decent performance they lost by nine points.

Grange made a great start to the game with an early goal but the Shanes were back on level terms soon after when Paddy Maughan pulled on a loose ball to drive it to the back of the Grange net.

Points from Ryan McCabe, Oliver Gaughran and a free from Paul O’Rourke put the Shanes three ahead with Grange replying with two points of their own to leave just the minimum between the sides. A fine long range point from Brendy Mackin edged the Shanes further ahead but Grange got the last two points of the half to leave the sides all square at the break at 1 – 4 apiece.

As with the first-half Grange scored an early goal to put the Shanes on the back foot and they followed it with another point to them four ahead with Paul O’Rourke replying with a point for the Camlough side.

Grange stretched their lead with two quick points before they registered their third goal of the game to give them an eight point advantage but three points in a row from Ryan Evans, Oliver Gaughran and Marc Feehan kept the Shanes well in the game.

The deficit was reduced to just two soon after when Ryan Evans kept his cool to slot the ball to the corner of the Grange net and get the Shanes right back into the contest. The sides then swapped points with Brendy Mackin on target for the Shanes but a pointed free from the home side left three between them.

With the game into injury time the Shanes were pushing all out for an equalising score but left themselves slightly exposed at the back which saw Grange score two late goals to seal the win, 5 – 9 to 2 – 9.

Elsewhere, Dorsey Emmets were officially relegation following a comprehensive 17-point defeat to Culloville. The win keeps Culloville in contention for promotion as they lie in fourth – one point behind neighbours Mullaghbawn who picked up a vital tw0 points against Whitecross, who look set on missing out following a decent start to the campaign.

Keady also picked up two points with a narrow win over Collegeland who, barring a mathematical miracle, will be relegated to the Junior A next season.

Clann Eireann remain well on course for promotion following a demolition of Middletown in Lurgan today. One more victory will secure them a place in the Senior League.

Madden bounced back from a disappointing defeat to Middletown on Friday night with victory over An Port Mor, keeping their title hopes alive in the process.

Newtown played Belleeks in wet slippery conditions on Sunday, Belleek made most of the early running and opened with a point from play which was cancelled out by a K Carragher point from play.

Belleek dominated around midfield and tagged on 2 more points, their full forward line was dominating but Newtown replied with a B Davidson goal and a B Caherty point. However, Newtown conituned to struggle in the middle and Belleeks reeled off 3 points from play with their full-forward proving very hard to handle.   B Davidson got another point before the half to leave the scores Newtown 1-03 Belleeks 0-8.

K Murray was introduced in the second half and this gave Newtown some much needed potency in attack, though Belleeks opened the second half scoring with a point from play. Newtown replied well with excellent scores from K Murray (f) N ORourke and B Caherty both from play.

This levelled the game and Newtown were playing well and getting to grips around the middle of the field. Then S Mackin put Newtown in front following great tackling in defense from C Nugent. Belleek scored from play to level again, and edged ahead with ten minutes left.

Newtown struggled and the games decisive score came when Belleek scored a goal to leave it 1-12 to 1-08 with five mins to play. The match petered out and finished Belleeks 1-13 to Newtown 1-08.

Best on the day for St Michaels were C Nugent, B Caherty and S Mackin, but the overall performance was disappointing especially from an attacking perspective.

Elsewhere, Tullysaran claimed a scalp by beating fellow promotion hopefuls Lissummon to go level at the top with Corrinshego who could only draw with Crossmaglen IIs today.

Derrynoose kept their challenge well and truly on track with victory over Clonmore.

It was a quiet weekend in the Junior B League, as Cullyhanna II’s match with Clann Eireann II was postponed this morning, hours before the scheduled 2pm throw in. The Clady and Killeavy II had also been postponed earlier this week.

The only match to take place went ahead in Armagh as Pearse Og grabbed a morale boosting victory over Dromintee II. This was only the Og’s second victory all season, but the points gained could be vital in helping them climb off the foot of the table as they are now level on points with Dromintee, although it’s worth noting that Dromintee have two games in hand.